Port Townsend- The Victorian Lady by the Sea 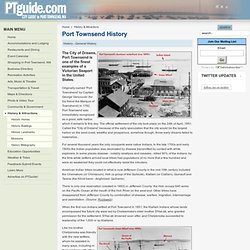 Originally named 'Port Townshend' by Captain George Vancouver (for his friend the Marquis of Townshend) in 1792, Port Townsend was immediately recognized as a good, safe harbor, which it remains to this day. The official settlement of the city took place on the 24th of April, 1851. Port Townsend, Washington. Port Townsend /ˈtaʊnzən/ is a city in Jefferson County, Washington, United States. 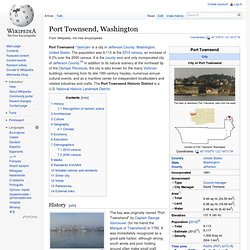 The population was 9,113 at the 2010 census, an increase of 9.3% over the 2000 census. It is the county seat and only incorporated city of Jefferson County.[6] In addition to its natural scenery at the northeast tip of the Olympic Peninsula, the city is also known for the many Victorian buildings remaining from its late 19th-century heyday, numerous annual cultural events, and as a maritime center for independent boatbuilders and related industries and crafts.