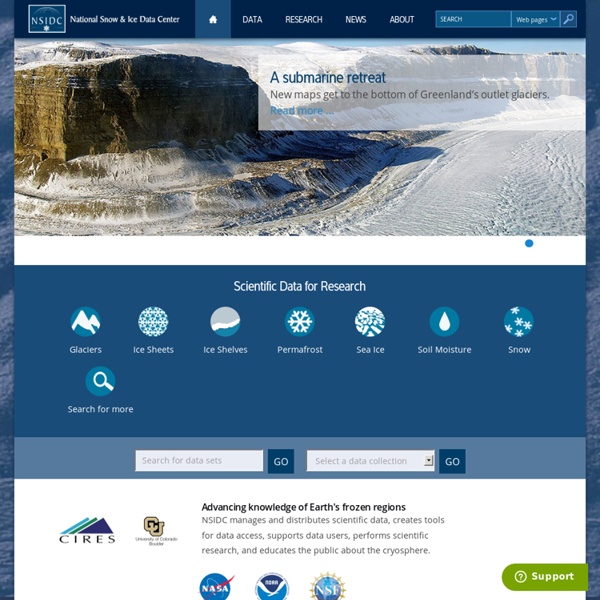 Arctic sea ice reduction: the evidence, models, and global impacts Scientific discussion meeting organised by Dr Daniel Feltham, Dr Sheldon Bacon, Dr Mark Brandon and Professor (Emeritus) Julian Hunt FRS Arctic sea ice cover. Image credit Mark Brandon Event details This meeting explores the recent, rapid Arctic sea ice reduction. Isotope The three naturally-occurring isotopes of hydrogen. The fact that each isotope has one proton makes them all variants of hydrogen: the identity of the isotope is given by the number of neutrons. From left to right, the isotopes are protium (1H) with zero neutrons, deuterium (2H) with one neutron, and tritium (3H) with two neutrons. Isotopes are variants of a particular chemical element such that, while all isotopes of a given element have the same number of protons in each atom, they differ in neutron number.

The Arctic Oscillation and Arctic Weather Patterns The map of sea level pressure for October 1 to 30, 2010, shows a high-pressure system cenetered over the Beaufort and Chukchi sea and Greenland, and low pressure over the Kara and Barents seas. This pattern tends to bring warm air from lower latitudes into the Arctic. —Credit: National Snow and Ice Data Center courtesy NOAA/ESRL PSD Climate and Weather These resources deal with climate and weather issues. They may track weather over specific periods of time or deal with specific areas of concern, such as global warming. For more information on climate change, check out the related resources. U.S. Information | International Information | Nongovernmental Sources | Resources in the Catalog | Related Topics U.S.

Arctic sea ice melt 'may bring harsh winter to Europe' Unprecedented sea ice loss may bring a cold winter to the UK, say researchers. Photograph: John Giles/PA The record loss of Arctic sea ice this summer may mean a cold winter for the UK and northern Europe. The region has been prone to bad winters after summers with very low sea ice, such as 2011 and 2007, said Jennifer Francis, a researcher at Rutgers University. "We can't make predictions yet … [but] I wouldn't be surprised to see wild extremes this winter," Francis told the Guardian.

Scientists debate polar sea-ice opposites 22 September 2014Last updated at 16:14 ET By Jonathan Amos Science correspondent, BBC News Explanations for the Antarctic abound, but there is "no single, underlying, silver-bullet cause" Arctic sea ice has passed its minimum summer extent, say polar experts meeting in London. The cover on 17 September dipped to 5.01 million sq km, and has risen slightly since then, suggesting the autumn re-freeze has now taken hold. This year's minimum is fractionally smaller than last year (5.10 million sq km), making summer 2014 the sixth lowest in the modern satellite record.

Paleoclimatology: The Ice Core Record : Feature Articles As valuable as the temperature record may be, the real treasure buried in the ice is a record of the atmosphere’s characteristics. When snow forms, it crystallizes around tiny particles in the atmosphere, which fall to the ground with the snow. The type and amount of trapped particles, such as dust, volcanic ash, smoke, or pollen, tell scientists about the climate and environmental conditions when the snow formed. As the snow settles on the ice, air fills the space between the ice crystals. When the snow gets packed down by subsequent layers, the space between the crystals is eventually sealed off, trapping a small sample of the atmosphere in newly formed ice. These bubbles tell scientists what gases were in the atmosphere, and based on the bubble’s location in the ice core, what the climate was at the time it was sealed.

Arctic Sea Ice News and Analysis On September 11, Arctic sea ice reached its likely minimum extent for 2015. The minimum ice extent was the fourth lowest in the satellite record, and reinforces the long-term downward trend in Arctic ice extent. Sea ice extent will now begin its seasonal increase through autumn and winter. US and National Weather Forecasts Would you like to set this location as default? Now8:19 AM Clouds and sun70° Hourly9 AMPartly sunny72°0 in10 AMPartly sunny75°0 in11 AMPartly sunny78°0 in12 PMPartly sunny80°0 in1 PMPartly sunny81°0 in2 PMPartly sunny82°0 in3 PMPartly sunny81°0 in4 PMIntermittent clouds80°0 in5 PMIntermittent clouds77°0 in6 PMRain76°0.024 in7 PMRain74°0.024 in8 PMCloudy71°0 in Polar Science Center » Arctic Sea Ice Volume Anomaly, version 2 Arctic Sea Ice Volume Anomaly Sea Ice Volume is calculated using the Pan-Arctic Ice Ocean Modeling and Assimilation System (PIOMAS, Zhang and Rothrock, 2003) developed at APL/PSC. Anomalies for each day are calculated relative to the average over the 1979 -2011 period for that day of the year to remove the annual cycle. The model mean annual cycle of sea ice volume over this period ranges from 28,700 km3 in April to 12,300 km3 in September.

Antarctic sea ice set for record high as Arctic heads for sixth lowest extent The extent of sea ice in Antarctica is set to reach a record high, scientists said on Tuesday, as they announced that Arctic sea ice appeared to have shrunk to its sixth lowest level ever. The NSIDC said that satellite data was expected to shortly confirm whether the maximum extent of sea ice at the opposite pole, in Antarctica, had set a new record. “Antarctic sea ice is poised to set a record maximum this year, now at 19.7 million sq km (7.6m sq m) and continuing to increase,” the centre, considered one of the world’s top authorities on sea ice data, said in a statement. Jan Lieser, of the Antarctic Climate and Ecosystems Co-operative Research Centre (CRC), told Australia’s ABC News that: “This is an area covered by sea ice which we’ve never seen from space before.” However, the centre noted that there had been a particularly strong retreat of sea ice in the Laptev Sea and although the reasons for that were not yet clear, sea temperatures there had been up to 5C higher than average.

Disko Bay Ice Coring Project You can fill in the blank with whatever you want, but “holy something,” yesterday was spectacular! After sitting in the clouds for two days, we got to sit on the top of those clouds for the whole day. Low coastal and valley cloud was thin enough for Peter to get the helicopter above it and to our first field site on Nuussuaq Peninsula. Ben had identified several sites on Nuussuaq and numbered them. National Forecast Maps Surface Analysis Highs, lows, fronts, troughs, outflow boundaries, squall lines, drylines for much of North America, the Western Atlantic and Eastern Pacific oceans, and the Gulf of Mexico. Standard Size | High Resolution Temperature Maximum daytime or minimum overnight temperature in degrees Fahrenheit.

'Astonishing' Ice Melt May Lead to More Extreme Winters The record loss of Arctic sea ice this summer will echo throughout the weather patterns affecting the U.S. and Europe this winter, climate scientists said on Wednesday, since added heat in the Arctic influences the jet stream and may make extreme weather and climate events more likely. The “astounding” loss of sea ice this year is adding a huge amount of heat to the Arctic Ocean and the atmosphere, said Jennifer Francis, an atmospheric scientist at Rutgers University in New Jersey. “It’s like having a new energy source for the atmosphere.” Francis was one of three scientists on a conference call Wednesday to discuss the ramifications of sea ice loss for areas outside the Arctic.