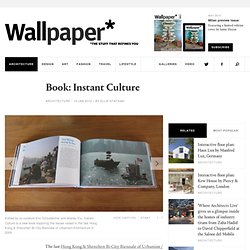 #Oresund #Malmo University #Sweden: Lecturing. 11th & 12th February 2013. - Dr. Igor Calzada. I started researching the Oresund City-Region in 2010, with one study in Malmö and the other one in Copenhagen. 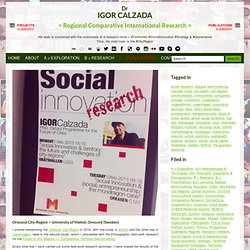 Here is the second study, which I proceeded with the Ethnographic field work research for the Future of City-Regions <> Comparative Territorial Benchmarking. Every time that I have carried out some field work research activities, I have shared the results of the field work by giving some seminars and lectures at the University of Malmö (Sweden): From Malmö, Oresund, Sweden. Follow here:Both lecturing sessions are going to Bambused: This lecturing is going to summarize the main conclusions of the City-Region / Euskal Hiria Congress 2012 that was held in Bilbao, Spain, in November 2012, with the participation of the academic Fredrik Björk and the practitioner Ulf Kyrling coming from Oresund to talk about CityRegions. Dr. At this lecture, he will focus his presentation on the CityRegion concept and its real challenges nowadays. Facebook eventUniversity of Malmö event Dr. Case1: LEINN. The Culture of Psychology and Magic.

Psychology departments around the country face a series of new and difficult challenges as online universities gain traction in the educational landscape. 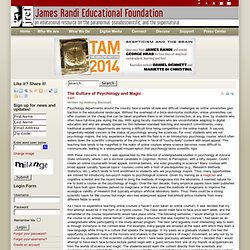 Without the overhead of a brick-and-mortar institution, online universities can offer courses on the cheap that can be taken anywhere there is an internet connection, at any time, by students who often have full-time jobs during the day. With aging faculty members who are uncomfortable adapting to digital education and who are already spread too thin between standard teaching and research commitments, many traditional academic departments are having a difficult time being competitive in the online market.

A second, tangentially-related concern is the status of psychology among the sciences. With these concerns in mind, I was approached by the director of undergraduate studies in psychology at Arizona State University, where I am a doctoral candidate in Cognition, Action, & Perception, with a lofty request. Gregory, R. Nardi, P. Cognitive Psychological For Urban Plan & Architecture Using the Virtual Reality System. The Virtual Reality system was applied to city planning and architectural design and a number of novel functions were added to the VR system by plug-in, which assisted and facilitated the design process. 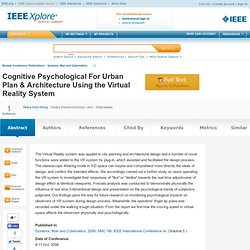 The stereoscopic thinking mode in 3-D space can inspire and comprehend more directly the ideas of design, and confirm the intended effects. We accordingly carried out a further study on users operating the VR system to investigate their responses of "like" or "dislike" towards the real time adjustments of design effect at identical viewpoints. Fractals analysis was conducted to demonstrate physically the influence of real time 3-dimentional design and presentation on the psychological trends of subjective judgment. Our findings pave the way for future research on monitoring psychological impacts on observers of VR system during design process. Meanwhile, the operators' finger tip pulse was recorded under the walking trough situation. 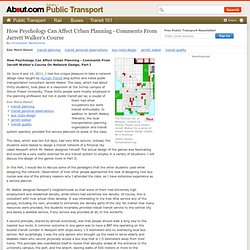 The class, which had about thirty students, took place in a classroom at the Surrey campus of Simon Fraser University. These thirty people were mostly employed in the planning profession but not in public transit per se; a couple of them had other occupations but were transit enthusiasts. The Importance of Psychology in Planning. Why doesn’t the field of urban planning borrow more insight from the field of psychology? 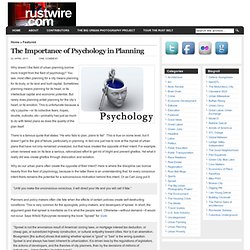 There is a famous quote that states: “He who fails to plan, plans to fail”. Why do our urban plans often create the opposite of their intent? “Until you make the unconscious conscious, it will direct your life and you will call it fate.” Planners and policy makers often cite fate when the effects of certain policies create self-destructing conditions. This is true to some extent—sprawl is driven by people’s wants. –By Richey Piiparinen.