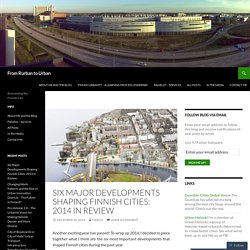 To wrap up 2014, I decided to piece together what I think are the six most important developments that shaped Finnish cities during the past year. Most things obviously weren’t invented this year nor did they directly affect every city; it’s better to grasp my list as themes that peaked to dominate urban policy discussions or to guide planning practice. Nonetheless, I feel that exceptionally much has happened on the Finnish urban development front and I believe the items on my list are likely to profoundly shape our cities and activities in them in the years ahead. Pedestrian 2 0. This Intersection Could Save Cyclists' Lives. Hopping on a bike may be the happiest way to get to work, but it's not an entirely safe way. 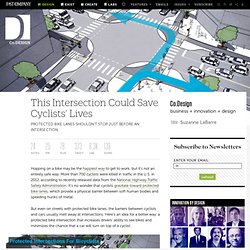 More than 700 cyclists were killed in traffic in the U.S. in 2012, according to recently released data from the National Highway Traffic Safety Administration. It's no wonder that cyclists gravitate toward protected bike lanes, which provide a physical barrier between soft human bodies and speeding hunks of metal. But even on streets with protected bike lanes, the barriers between cyclists and cars usually melt away at intersections. A Dictator's Guide to Urban Design - Matt Ford. Ukraine's Independence Square, and the revolutionary dimensions of public spaces. 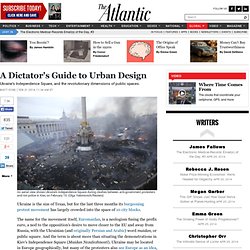 An aerial view shows Ukraine's Independence Square during clashes between anti-government protesters and riot police in Kiev, on February 19. (Olga Yakimovich/Reuters) Ukraine is the size of Texas, but for the last three months its burgeoning protest movement has largely crowded into the space of 10 city blocks. Design With Cities, Not For Them. Article by Scott Burnham, an urban strategist and design director who has created and directed initiatives in 11 cities worldwide. 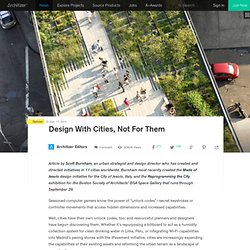 What does a world with a reduced need for cars and parking look like? 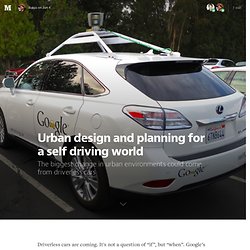 In a perfect world, we’d stop building insanely large highways, downtown parking lots, and sprawling suburbs. That probably won’t happen, but hopefully we’ll make a step in the right direction. I think surface parking lots, especially ones that are close to city centers, will be the first to go. The Safest Suburb In The World Did It By Ending The Culture Of Cars. What happens when you build mobility systems entirely around safety? 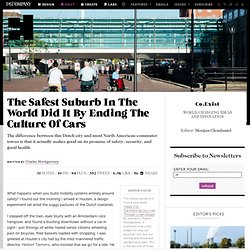 I found out the morning I arrived in Houten, a design experiment set amid the soggy pastures of the Dutch lowlands. I stepped off the train, eyes blurry with an Amsterdam-size hangover, and found a bustling downtown without a car in sight--just throngs of white-haired senior citizens wheeling past on bicycles, their baskets loaded with shopping. I was greeted at Houten’s city hall by the mild-mannered traffic director, Herbert Tiemens, who insisted that we go for a ride. He led me down Houten’s main road, which was not actually a road but a winding path through what looked like a golf course or a soft-edged set from Teletubbies: all lawns and ponds and manicured shrubs. Not a car in sight. How Barcelona and Philadelphia Are Turning Procurement Upside Down. New ideas are rare in the staid world of government contracting. 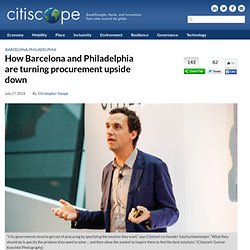 But in Barcelona, city contracts worth as little as €60,000 have entrepreneurs buzzing — and cities around the world watching to see who wins them. That’s because the deals up for bid are unlike anything Barcelona, or almost any other city, has done before. Barcelona is searching for business partners to help thwart bicycle thieves, detect potholes and solve several other woes of city life. Along the way, the city is flipping many of the usual rules of public-sector procurement upside down. Typically when cities buy goods or services, they spell out in strict detail exactly what it is they want to buy. Barcelona’s less proscriptive approach turns the old system on its head. The engineer of this process is Sascha Haselmayer, co-founder of a consultancy called Citymart that recently hosted a major convocation on government innovation generation in London.

The model spreads Philadelphia chose to focus first on public safety. Institute for media, architecture and design. Strategic design attempts to draw a wider net around an area of activity or a problem, encompassing the questions and the solutions and all points in between; design involves moving freely within this space, testing its boundaries in order to deliver definition of, and insight into, the question as much as the solution, the context as much as the artefact, service or product. 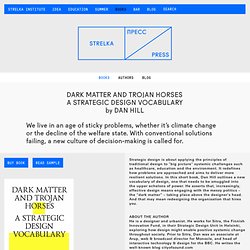 Call the context “the meta” and call the artefact “the matter”. Strategic design work swings from the meta to the matter and back again, oscillating between these two states in order to recalibrate each in response to the other. “A case study: project work at the State Library of Queensland in Brisbane. Initially, Arup pitched a ‘post-occupancy evaluation’ of the library’s popular wi-fi service. This ultimately involved several days on-site, observing, interviewing, filming and photographing, as well as building 3D models of wi-fi signal strength in order to understand its relationship to physical space. Neuroergonomics, Urban Design, Sociogenesis by Stefano Serafini. The people designing your cities don’t care what you want. They’re planning for hipsters. Fireworks burst over the Detroit skyline during the Ford Fireworks show in downtown Detroit. 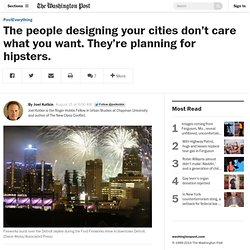 (Diane Weiss/Associated Press) What is a city for?