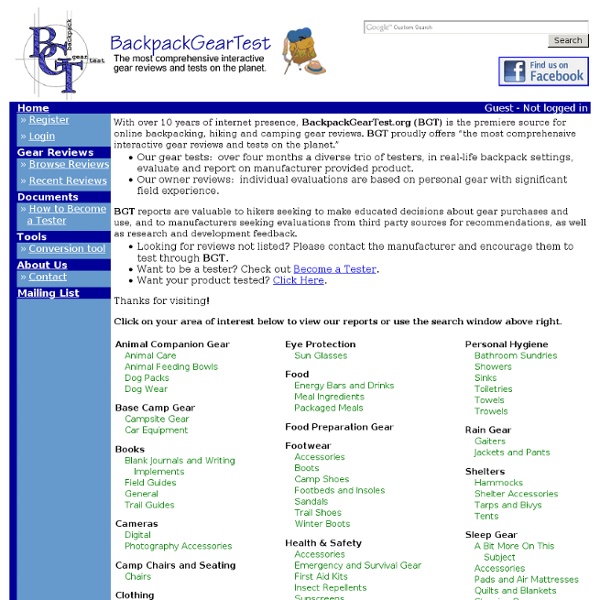 With over 10 years of internet presence, BackpackGearTest.org (BGT) is the premiere source for online backpacking, hiking and camping gear reviews. BGT proudly offers “the most comprehensive interactive gear reviews and tests on the planet.” Our gear tests: over four months a diverse trio of testers, in real-life backpack settings, evaluate and report on manufacturer provided product. Our owner reviews: individual evaluations are based on personal gear with significant field experience. BGT reports are valuable to hikers seeking to make educated decisions about gear purchases and use, and to manufacturers seeking evaluations from third party sources for recommendations, as well as research and development feedback. Looking for reviews not listed?

10 Round the World Travel Myths Debunked Excuses, excuses, excuses. When it comes to travel, particularly long term travel, everyone has an excuse for why they can’t do it. Myths abound about long term, RTW travel, and if you’re on the fence about taking the plunge for yourself, it’s time to realize that absurdity of some of these myths. Why is it that the people who have never traveled long term have such a skewed view of this type of travel? Why are there so many myths out there that are just flat out untrue? While it’s difficult to answer these questions, it’s not very hard to dispel the many myths about RTW travel that are out there.

Animal Sleep Most animals have a daily pattern of rest and activity. Some animals are more active during the day (diurnal) and some are more active during the night (nocturnal). How much time do animals spend sleeping? Well, it depends on the animal: How to Travel Full-Time for $17,000 a Year (or Less!) Wise Bread Picks For the last five years, I've been traveling the world full-time, and for less money than I've ever spent (and I'd wager less money than most people would spend) to live in one place. My worldly possessions fit into one bag (just larger than carry-on size) and a backpack containing my laptop and computer gear. This small entourage (weighing less than 45 pounds in total) comes with me as I wander around the world, sometimes quickly, but mostly slowly. In 2011 alone, I traversed 13 countries and over 45,360 miles.

8 places where you shouldn't travel alone Some of the world's most appealing destinations are also some of the most complicated places to visit. Here, eight places where even the most streetwise traveler would be smart to enlist guidance. The words "group travel" can conjure up visions of busloads of tourists roaring past sites, checking off a strict itinerary. But not all group tours are created equal. More importantly, there are some places where you'd be at a distinct disadvantage without a guide.

The Top 100 Items to Disappear First by Mr. Smashy Survival Cache You could also call this “The Top 100 Things You should start stocking up on.” Even if you don’t need more than 2 (you should always have 2 of everything) each item on this list will be great for bartering.

6 Ways to Travel Endlessly - StumbleUpon Traveling the way most people do it isn’t enough. Saving all year long at a job for just two weeks a year won’t let you see the world the way you want to see it. So you find someone to take care of your stuff while you travel the world. You’re all set to see everything you ever wanted for as long as you want. Then you realize something: you don’t have enough money to do it. Planning a Trip to Europe: Your 10-Step Guide Before you can experience authentic Spanish tapas, piazzas in Rome or rooftop terraces in Prague, an important to-do list stands between you and your European vacation. The logistics involved in planning a Europe trip may seem tedious or overwhelming, but the more prepared you are, the greater your chances of a successful trip that lives up to your expectations. That's why it's important to do a bang-up job creating an itinerary, arranging transportation and tackling the brass tacks before you're off to the Continent. The following simple steps will help you engineer a well-planned escape to Europe -- so you can spend less time worrying about your travel arrangements and more time staring at pictures of castles and men in kilts.

John Conway's Game of Life The Game The Game of Life is not your typical computer game. It is a 'cellular automaton', and was invented by Cambridge mathematician John Conway. This game became widely known when it was mentioned in an article published by Scientific American in 1970. 18 Lessons from 5 Years Around the World - Nomadic Matt's Travel Site - StumbleUpon Five years is a long time to be on the road. Five years spent living out of your backpack, with no permanent home or address. I never thought I was going to travel this long. It was only gong to be a year, maybe 18 months tops, and then I’d go back home, find a “real” job, settle into life, and by now, I’d be married, have a house, 2.5 children, and be complaining about my retirement fund to my friends. But here I am, five years later, in Romania, with the same backpack, still traveling, still staying in hostels, and still having the time of my life.