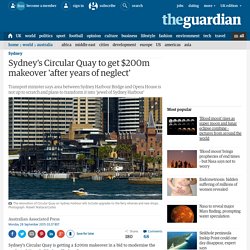 The renovation will include upgrades to the ferry wharves and new shops. The New South Wales transport minister, Andrew Constance, said the area, which is wedged between the Harbour Bridge and Opera House, was not reaching its full potential. “Circular Quay should be a window to our beautiful harbour but after years of neglect, this gateway to the city is simply not up to scratch,” Constance said in a statement on Monday. 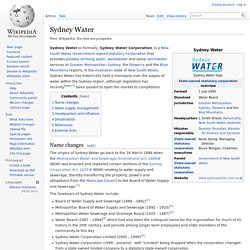 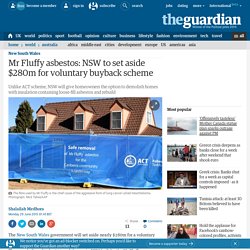 There are believed to be 511 such homes in NSW built by the Mr Fluffy company, which used loose-fill asbestos roofing insulation in the 1960s and 70s. The fibre is the chief cause of the aggressive lung cancer mesothelioma. The buyback scheme will go further than a similar scheme announced by the ACT government because it gives homeowners the option to demolish their homes and rebuild on their land. Homeowners also have the option to sell the land. A taskforce will be established to oversee the scheme. Fleetwood. Coordinates: Fleetwood is a town within the Wyre district of Lancashire, England, lying at the northwest corner of the Fylde. 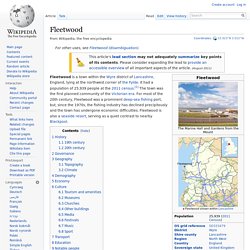 It had a population of 25,939 people at the 2011 census.[1] The town was the first planned community of the Victorian era. For most of the 20th century, Fleetwood was a prominent deep-sea fishing port, but, since the 1970s, the fishing industry has declined precipitously and the town has undergone economic difficulties. You can Reap the rewards of social housing. It is the “ethical” alternative to buy-to-let that is targeting older people looking to cash in their pension funds, and boasts a tempting 7%-a-year return. 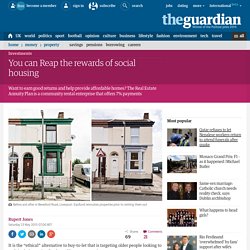 The Real Estate Annuity Plan (Reap) allows people to lend money to a social enterprise that specialises in converting derelict properties into affordable rented homes for those in need, such as families on council waiting lists. It is being offered by a Merseyside-based mutual organisation called Equfund, and is aimed at those looking for a better return than they would get from a traditional annuity. Reap may also appeal to those who would like a slice of property market action but are put off by the high costs/perceived hassle/questionable ethics of buy-to-let. Metropolitan Redevelopment Authority. Saudi Arabia's new desert megacity. 19 March 2015Last updated at 21:48 ET By Sylvia Smith BBC News, Saudi Arabia The entrance to Saudi Arabia's newest city. 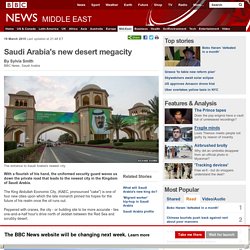 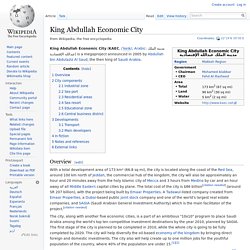 §Overview[edit] With a total development area of 173 km² (66.8 sq mi), the city is located along the coast of the Red Sea, around 100 km north of Jeddah, the commercial hub of the kingdom, the city will also be approximately an hour and 20 minutes away from the holy Islamic city of Mecca and 3 hours from Medina by car and an hour away of all Middle Eastern capital cities by plane. Desalination. Desalination, desalinization, and desalinisation refer to any of several processes that remove some amount of salt and other minerals from saline water. 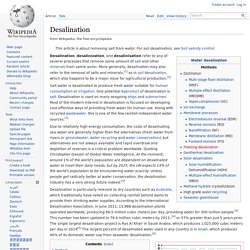 More generally, desalination may also refer to the removal of salts and minerals,[1] as in soil desalination, which also happens to be a major issue for agricultural production.[2] Salt water is desalinated to produce fresh water suitable for human consumption or irrigation. One potential byproduct of desalination is salt. Desalination is used on many seagoing ships and submarines. Audrc. Wikipedia walkable cities. London Plan. The London Plan is the statutory spatial development strategy for the Greater London area in the United Kingdom that is written by the Mayor of London and published by the Greater London Authority.[1] The regional planning document was first published in final form on 10 February 2004. 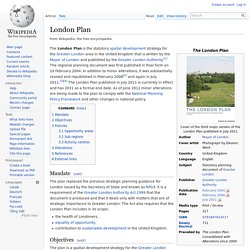 In addition to minor alterations, it was substantially revised and republished in February 2008[2] and again in July 2011.[3][4] The London Plan published in July 2011 is currently in effect and has 2031 as a formal end date. As of June 2012[update] minor alterations are being made to the plan to comply with the National Planning Policy Framework and other changes in national policy.

Mandate[edit] Carriageworks sydney. Port Jackson. The location of the first European settlement in Australia, the harbour has continued to play a key role in the history and development of Sydney. 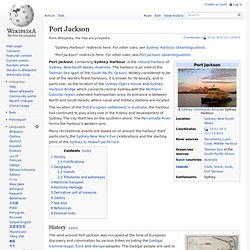 The city itself lies on the southern shore. The Parramatta River forms the harbour's western arm. Many recreational events are based on or around the harbour itself particularly the Sydney New Year's Eve celebrations and the starting point of the Sydney to Hobart yacht race. History[edit] Sydney Cove, Port Jackson in the County of Cumberland - from a drawing made by Francis Fowkes in 1788. A Japanese Ko-hyoteki class midget submarine, believed to be Midget No. 14, is raised from Sydney Harbour on 1 June 1942.

Finger Wharf. The Finger Wharf or Woolloomooloo Wharf is a wharf in Woolloomooloo Bay, Sydney, Australia. The structure is the longest timbered-piled wharf in the world,[1] and was completed in 1915. During its working life for around 70 years it mainly handled the export of wool, but also acted as a staging point for troop deployment to the World Wars as well as a disembarking point for new migrants arriving in Australia. Today it has been redeveloped as a fashionable complex housing a hotel, restaurants and residential apartments. Garden Island, New South Wales. Garden Island is an inner-city locality of Sydney, Australia and the location of a major Royal Australian Navy (RAN) base.

It is located to the north-east of the Sydney central business district and juts out into Port Jackson, immediately to the north of the suburb of Potts Point. Used for government and naval purposes since the earliest days of the colony of Sydney it was originally a completely detached island. It was joined to the Potts Point shoreline by major land reclamation work during World War II. Green ban. Background[edit] Green bans were first conducted in Australia in the 1970s by the New South Wales Builders Labourers Federation (BLF). Green bans were never instigated unilaterally by the BLF, all green bans were at the request of, and in support of, residents' groups.

The Core Cities Group has wide ranging interests, encompassing transport and connectivity, innovation and business support, skills and employment, sustainable communities, culture and creative industries, climate change, finance and industry, and governance. During 2012 the first wave of 'city deals' recognised the eight cities as "the largest and most economically important English cities outside of London".[1] Since 2010, British cities outside of England have started consultations for incorporation into the group. As of 14-Aug-2014, Glasgow has joined the group as the first non-English city. [2] History[edit] Localism Act 2011[edit] Group membership[edit] From wasteland to recycling waste: Malmo's eco district. A defunct shipyard in the city of Malmo, Sweden, has been transformed into a green, sustainable districtThe Bo01 project created a residence where 100 percent of energy comes from renewable sourcesFood waste is converted into biogas for use in local busesThe project didn't meet all goals but has set an example now used in eco-projects in other parts of the world Editor's note: Future Cities offers an inside look at the rapid evolution of urban spaces, exploring new ideas, new technologies and new design concepts that might impact urban life throughout the world.

(CNN) -- Sun, wind and water now rule an area that was once polluted and derelict. In the Swedish city of Malmo, an old shipyard has been converted from industrial wasteland to spotless eco-district, setting a world class example for sustainable living. Sustainable Malmö. Malmö has changed from a grey industrial city with deserted streets and squares to an exciting city of the future, where anything can happen – and does. Let sustainability guide Catarina Rolfsdotter-Jansson take you on a tour of one of the world’s greenest cities, a city with several prestigious prizes for its work on sustainable development:

The official travel guide to your holiday in Sweden. Malmo_Case_Study. Stockholm and Malmö at the forefront of sustainable urban development according to a new UN study - Stockholm University. Thomas Elmqvist at Stockholm Resilience Centre, Scientific Editor of the report. The assessment, entitled Cities and Biodiversity Outlook and edited by Professor Thomas Elmqvist at Stockholm Resilience Centre at Stockholm University, draws on contributions from more than 120 scientists worldwide. Malmö – the sustainability project in the city of the future - Crossing Borders. Malmö's path towards a sustainable future Health, welfare and justice - IHE. Commission for a socially sustainable Malmö_Final report.