MonroeShopsHistoryandPreservation. North Texas Interurbans - Transportation - Fort Worth Forum. The original US 67 / SH 1 and US 80 / SH 15 split on East Grand at Samuels Blvd, aka East Pike. 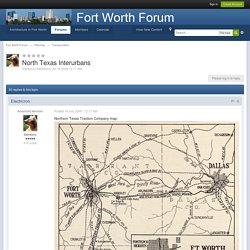 Thanks for posting that. I have wondered exactly where it might have been - and that makes perfect sense. For a brief while, I was under the impression that there might have been a traffic circle near where Buckner crosses Samuels and modern I-30 thinking that might have been where the split was. The Circle Grill that once existed nearby - and which I understand has been revived - also made me wonder if perhaps that is where the restaurant took its name from. But, apparently, there never was such a traffic circle.

Now, here is something about Hwy 80 which I WILL ultimately tie in with the Interurbans. Prior to 1931, the section of old Hwy 80 between Mesquite and Forney was notorious to cross country travelers. Interurban Electric Railway, Hill County, Texas. 105 North Waco St, Hillsboro, Texas (generating plant) For over three decades (1913 – 1948), the Interurban Texas Electric Railway played a significant role in the transportation needs of Hill County residents. 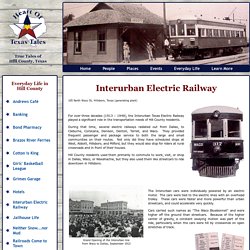 During that time, several electric railways radiated out from Dallas, to Cleburne, Corsicana, Denison, Denton, Terrell, and Waco. They provided frequent passenger and package service to both the large and small communities on their routes. Not only did they have scheduled stops at West, Abbott, Hillsboro, and Milford, but they would also stop for riders at rural crossroads and in front of their houses. Hill County residents used them primarily to commute to work, visit, or shop in Dallas, Waco, or Waxahachie, but they also used them like streetcars to ride downtown in Hillsboro. The Interurban cars were individually powered by an electric motor. Cars carried such names as "The Waco Bluebonnet" and were higher off the ground than streetcars. 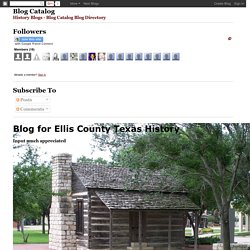 He wanted to connect Denison and Sherman. In 1899 Fitch asked R H McWilley to survey a route between Denison and Sherman. Fitch and partners purchased College Hills and Park Railway and the City Street Railway Co. of Sherman. Their idea was to compete with the Houston and Texas Central. He would offer more frequent and efficient travel than the HT&C. J F Strickland at the age of 32 managed the Electric Utility of Waxahachie, Texas. In 1912 Waxahachie's mule car line, Waxahachie Street Railway Company, was already being converted to electric cars after being purchased by the Southern Traction Company. The merger of Strickland's Texas Traction and Southern Traction created the Texas Electrci Railway. NOTE:Now if you noticed Ovilla was left out of the interurban path. Note: I believe interurban cars could be parked on the back on the West Baylor side. Texas Electric Railway's Interurban Service. Texas Electric Railway.

Monroe Shops and the Interurban. Along Dallas Area Rapid Transit’s Blue Line stands a dignified industrial building, one remnant of a rail network that connected communities across North Texas and helped Dallas become a regional leader for business. 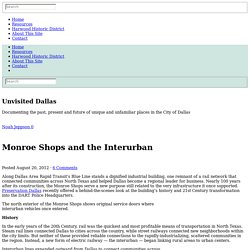 Nearly 100 years after its construction, the Monroe Shops serve a new purpose still related to the very infrastructure it once supported. Preservation Dallas recently offered a behind-the-scenes look at the building’s history and 21st Century transformation into the DART Police Headquarters. The north exterior of the Monroe Shops shows original service doors where interurban vehicles once entered. History. Dallas Historical Streetcar Lines. Dallas' Dependence on Sprawl and Cars Is Plain Dumb. Recently I came across a great term of art I think aptly describes the contrast between the way the Bishop Arts/North Oak Cliff district of the city is growing and the way West Dallas is developing. 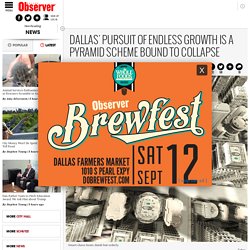 It's, "Orderly but dumb versus chaotic but smart. " A tight fit. In a conversation with Charles Marohn of "Strong Towns," a national nonprofit promoting financial resilience for communities and cities, I described the way I saw the recent history of these two neighboring domains across the Trinity River from downtown Dallas. In North Oak Cliff in what was once a down-at-the-heels early 20th century low-rise brick commercial district originally laid out on trolley lines, you have all kinds of piecemeal development put together by little guys, male and female, using money they scraped together themselves to salvage and repurpose old buildings. Sometimes they get some grudging help from City Hall. Pretty bleak picture, eh? Nobody. "I was there, too," he said. "Here's the catch. Trinity River (Texas) 1919 Map and guide of Dallas & suburbs., Sequence: 1. 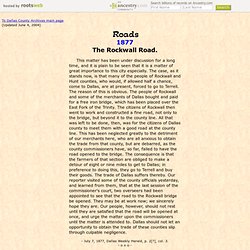 This matter has been under discussion for a long time, and it is plain to be seen that it is a matter of great importance to this city especially. Railways, Dallas County, Texas. The Progress of Electricity as a Motive Power for Street Railways. 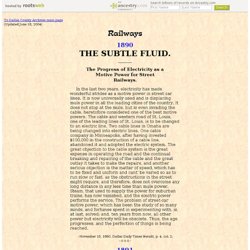 In the last two years, electricity has made wonderful strides as a motive power in street car lines. It is now universally used and is displacing mule power in all the leading cities of the country. Dallas.