Commonplace 2023: who said you can't do foresight with a startup? Someone asked me a couple of months ago why startups don’t do foresight or futures work. 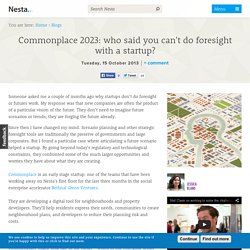 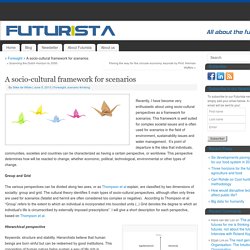 This framework is well suited for complex societal issues and is often used for scenarios in the field of environment, sustainability issues and water management. It’s point of departure is the idea that individuals, communities, societies and countries can be characterized as having a certain perspective, or worldview. This perspective determines how will be reacted to change; whether economic, political, technological, environmental or other types of change. Group and Grid The various perspectives can be divided along two axes, or as Thompson et al explain, are classified by two dimensions of sociality: group and grid.

Cultural theory; frameworkSource: Thompson et al. (1990) Future_fabulators:scenario_methods [the libarynth] Scenario Methods This page is an evolving, non-exhaustive collection of different methods and techniques that can be used in scenario building, particularly focusing on the ones that might be useful for Future Fabulators. 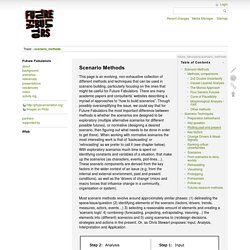 There are many academic papers and consultants' websites describing a myriad of approaches to “how to build scenarios”. Though possibly oversimplifying the issue, we could say that for Future Fabulators the most important difference between methods is whether the scenarios are designed to be exploratory (multiple alternative scenarios for different possible futures), or normative (designing a desired scenario, then figuring out what needs to be done in order to get there). Overcoming obstacles to effective scenario planning. When scenario planning has worked well, it has proved enormously useful to a wide range of organizations as a tool for making decisions under uncertainty. 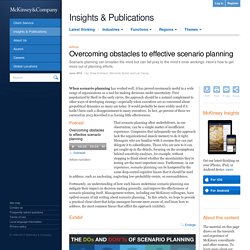 First popularized by Shell in the early 1970s, the approach should be a natural complement to other ways of developing strategy—especially when executives are as concerned about geopolitical dynamics as many are today. It would probably be more widely used if it hadn’t been such a disappointment to many executives. In fact, 40 percent of those we surveyed in 2013 described it as having little effectiveness. 68 The Current state of scenario development foresight march 2007. Hinesight....for Foresight. Been having some interesting discussions about scenarios lately and think we might have a few blog posts brewing here. 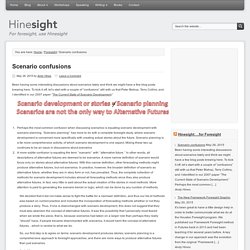 To kick it off, let’s start with a couple of “confusions” still with us that Peter Bishop, Terry Collins, and I identified in our 2007 paper “The Current State of Scenario Development.” Perhaps the most common confusion when discussing scenarios is equating scenario development with scenario planning. “Scenario planning’’ has more to do with a complete foresight study, where scenario development is concerned more specifically with creating actual stories about the future. Scenarios and visioning. Prospective, forward-looking studies include a vast range of concepts and approaches, which aim at exploring plausible and/or preferable futures to improve decision-making processes. 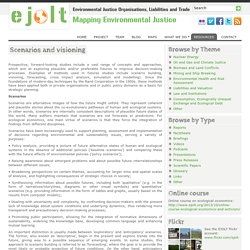 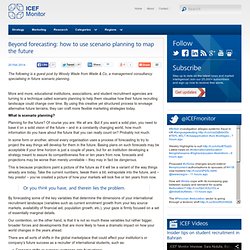 More and more, educational institutions, associations, and student recruitment agencies are turning to a technique called scenario planning to help them visualise how their future recruiting landscape could change over time. By using this creative yet structured process to envisage alternative future terrains, they can craft more flexible marketing strategies today. What is scenario planning? Planning for the future? Untitled. Long-Run vs. Long-Lag. All distant problems are not created equally. By definition, distant (long-term) problems are those that show their real impact at some point in the not-near future; arbitrarily, we can say five or more years, but many of them won't have significant effects for decades. Our habit, and the institutions we've built, tend to look at long-term problems as more-or-less identical: Something big will happen later. For the most part, we simply wait until the long-term becomes the near-term before we act.

This practice can be effective for some distant problems: Let's call them "long-run problems. " With a long-run problem, a solution can be applied any time between now and when the problem manifests; the "solution window," if you will, is open up to the moment of the problem. OtF Core: Open Source Scenario Planning. Open Source Scenarios Archives. The deputy editor of the Economist, Robert Cottrell, thinks he knows what I'm up to. Well, me and the myriad other folks working to analyze what the future could hold, in order to make better choices. In "The future of futurology," Cottrell argues that the only way to have any credibility as a futurist to think small, think short-term, and shut up.

So there you are on the moon, reading The World in 2008 on disposable digital paper and waiting for the videophone to ring. But no rush, because you're going to live for ever-and if you don't, there's a backed-up copy of your brain for downloading to your clone. Yes? Futures Thinking: Mapping the Possibilities (Part 2) In Futures Thinking: The Basics, I offered up an overview of how to engage in a foresight exercise. 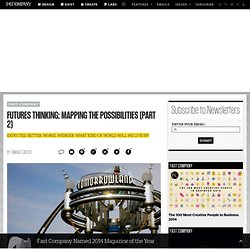 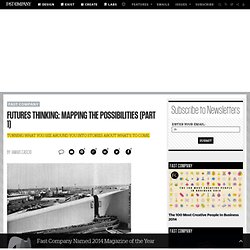 In Futures Thinking: Asking the Question, I explored in more detail the process of setting up a futures exercise, and how to figure out what you're trying to figure out. In Futures Thinking: Scanning the World, I took a look at gathering useful data. This time, we dive into the heart of the process: creating alternative scenarios. Note the plural. Foresight exercises that result in a single future story are rarely as useful as they appear, because we can't predict the future.

Analytical vs Judgmental Foresight and Scenarios. The unspoken scenario. Consider for a moment what would happen if you lost everything you own and all your money. 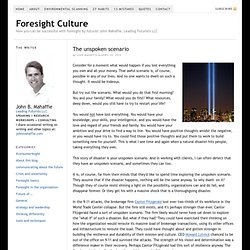 That awful scenario is, of course, possible in any of our lives. And no one wants to dwell on such a thought. It would be hideous. But try out the scenario. The essence of scenarios, learning from the Shell experience. Wilkinson and Kupers (2014) The essence of scenarios: learning from the Shell experience, Amsterdam University Press. On March 4th 2014, an exciting new book on working with scenarios was launched by Amsterdam University Press: The essence of scenarios: learning from the shell experience by authors Angela Wilkinson and Roland Kupers. Both authors have an impressive history on working with scenarios inside and outside the Shell company and through their book provide us with an insiders view on the roll of scenarios and the famous scenario team in Shell from the early 1960’s up till now. The book gives us an insight in the development and fine-tuning of the ‘gentle art’ of scenario planning in Shell and is basically a unique case study with educational insights for both beginners and more experienced foresight experts.

Wilkinson “What we have done is reconstruct the history. Six things fiction writing taught me about foresight. I have posted at johnmahaffie.com, the inverse of this theme: Six things studying the future has taught me about fiction writing I’ve spent a couple of years deep in the ranks of amateur novelists, working on a couple of novels, which I will confess, though I am a futurist, are set in the past, one in 1916, and one in the 1970s. I am still learning the basics by writing fiction every day, but doing it has already paid off for my work as a futurist. How? Several ways. 1. 2.

Strategic Scenario Modeling. In industries undergoing major changes, by definition it’s no longer business as usual. Decision makers find their ‘visibility’ is more limited than ever…right at the time when they need it most. Scenario modeling goes beyond predicting the future; it's a way of framing and monitoring the dynamics that will produce the future. Introduction to the Scenario Methodology.

Living in the Futures. In 1965 Royal Dutch Shell put into service what it called the Unified Planning Machinery (UPM), a computer-driven system meant to bring more discipline to the company’s cash flow planning. This kind of rational, model-based financial forecasting was very much in vogue in the 1960s. But before long, Shell’s top executives realized that many of the commitments they had to make extended well beyond UPM’s six-year time horizon—and that even within that horizon, UPM tended to get a lot wrong. Scenarios, Foresight and Change. Tutorial 2 - Building Scenarios. Scenarios are a way of developing alternative futures based on different combinations of assumptions, facts and trends, and area where more understanding is needed for your particular scenario project. How to do Scenario Planning in 13 steps.