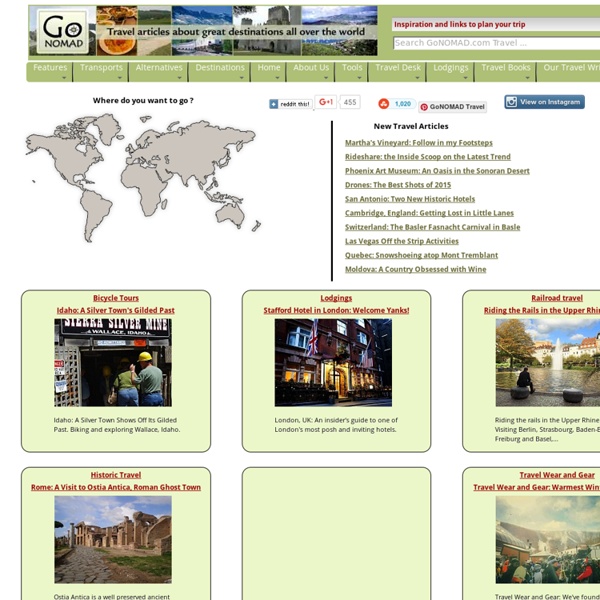 Columns :: W.W.J.K.: Who Would Jesus Kill? by Ann Coulter Ann Coulter is the author of seven New York Times bestsellers — Guilty: Liberal Victim and Their Assault On America (January 2009); If Democrats Has Any Brains,They'd Be Republicans (October 2007); Godless: The Church of Liberalism (June 2006); How to Talk to a Liberal (If You Must) (October, 2004), Treason: Liberal Treachery From the Cold War to the War on Terrorism (June 2003); Slander: Liberal Lies About the American Right (June 2002); and High Crimes and Misdemeanors:The Case Against Bill Clinton ( August 1998). Ann Coulter is the legal correspondent for Human Events and writes a popular syndicated column for Universal Press Syndicate. Ann Coulter clerked for the Honorable Pasco Bowman II of the United States Court of Appeals for the Eighth Circuit and was an attorney in the Department of Justice Honors Program for outstanding law school graduates. ... show less

World Hum Go Backpacking - The Best Around the World Travel Blog Where To Go After College? Whether You Travel Or Work Abroad After College, It's Up To You! :: CollegeAftermath.com There is no time like now if you’re an explorer at heart! Where to go after college is one of the many difficult decisions you may face after graduation. The one thing you may take for granted is that now, for the first time in your life, you are completely free! Sure, you may have some major financial commitments and debt after college, but otherwise, you can do WHATEVER you want! You can travel, volunteer or work abroad after college – you can go WHEREVER you want! You can be WHATEVER you want! For some reason, people have the tendency to settle for a career, get married, have kids, and then that’s it. When I decided I was going to live abroad after college, every single adult that I spoke with told me the same thing – “Now is the time! Luckily, there are a host of opportunities for college grads looking to explore the world. If you only want to travel, to explore, to see the world… Begin by deciding where you want to go and how long you want to go. Book your transportation. Eat cheap.

: radio and TV news BootsnAll News and travel tips for independent budget travellers July 2nd, 2010 by Tim Uden City Circle tram Trams are to Melbourne what red double-decker buses are to London and yellow taxis are to New York City. State Library of Victoria The free Wi-Fi connection attracts at lot of travellers to the State Library but few venture beyond the first couple of rooms. CC-by-SA David Iliff Federation Square For years Melbourne never really had a central square. NGV Ian Potter Centre While you’re at Federation Square pay a visit to the National Gallery of Victoria’s Ian Potter Centre (not to be confused with NGV International across the Yarra River at 180 St Kilda Road, which displays the NGV’s international collection). The view from the 35th floor Sure you can pay $17.50 to go to the observation deck on the 88th floor of the Eureka Tower for a great view or you can save your money and take the lift to the 35th floor of the Sofitel Hotel at Collins Place (25 Collins Street, Melbourne) and use the public toilets, which offer the city’s best free view.

Travel Cheap And Travel Young: 10 Countries You Can Visit On A College Budget With the travel season upon us, it’s time to begin exploring again and creating memories that last. Like everyone else, I’m pretty much broke and can’t afford to go on a luxury trip across Europe, but just because the university takes all my cash doesn’t mean I can’t still travel. Here is a list of 10 countries that rank on the low-end for cost right now: Bolivia Home to many activities and sites, this cheap country will have you living like a king for less than you would think. You can get a nice place to stay, food, transportation and even alcohol for less than 20 USD per day. Thailand Thailand has been trying to revamp its tourism as of late and many tourism companies have been offering excellent deals. If you are open to bunks, you can easily get by for an entire day on that price. Greece With the state of the economic condition in Greece, prices are low and the tourism will help bring in some more much-needed money. This is one of the best locations in all of Europe for cheap travel. Spain