Every Nuclear Explosion Since 1945 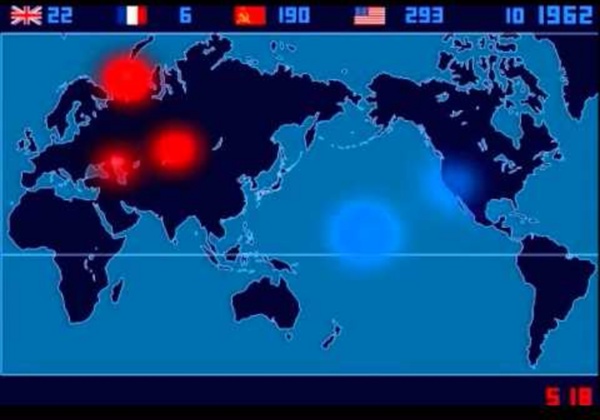 Shock: Fracking Used to Inject Nuclear Waste Underground for Decades Aaron Dykes and Melissa MeltonActivist Post Unearthed articles from the 1960s detail how nuclear waste was buried beneath the Earth’s surface by Halliburton & Co. for decades as a means of disposing the by-products of post-World War II atomic energy production. Fracking is already a controversial practice on its face; allowing U.S. industries to inject slurries of toxic, potentially carcinogenic compounds deep beneath the planet’s surface — as a means of “see no evil” waste disposal — already sounds ridiculous, dangerous, and stupid anyway without even going into further detail. Now, it is apparent that the fracking industry is also privy to many secrets of the nuclear energy industry and, specifically, where the bodies are buried, err… dangerous nuclear waste is buried, rather — waste that atomic researchers have otherwise found so difficult to eliminate.

US police smash camera for recording killing - Features A picture may be worth 1,000 words, but Narces Benoit's decision to videotape a shooting by Miami police landed him in jail after officers smashed his cell-phone camera. It was 4am on May 30 when Benoit and his girlfriend Erika Davis saw officers firing dozens of bullets into a car driven by Raymond Herisse, a suspect who hit a police officer and other vehicles while driving recklessly. Herisse died in the hail of lead, and four bystanders also suffered gunshot wounds, the Miami Herald newspaper reported. Police noticed the man filming the shooting and an officer jumped into his truck, and put a pistol to his head, Benoit said. Pearl Harbor advance-knowledge conspiracy theory The Pearl Harbor advance-knowledge conspiracy theory is the idea that American officials had advance knowledge of Japan's December 7, 1941 attack on Pearl Harbor. Ever since the Japanese attack there has been debate as to how and why the United States had been caught off guard and how much and when American officials knew of Japanese plans for an attack.[1][2] Several writers, including journalist Robert Stinnett[3] and retired US Navy Rear Admiral Robert A. Theobald,[4] have argued that various parties high in the U.S. and British governments knew of the attack in advance and may even have let it happen or encouraged it in order to force America into war via the "back door.

Attack of the Drones - People & Power The US government’s growing reliance on aerial drones to pursue its war on al-Qaeda and the Taliban in Yemen, Afghanistan and elsewhere is proving controversial – as evidenced by the international reaction to recent drone missile attacks along the border with Pakistan. But Barack Obama’s administration is undeterred, favouring the technology more and more because it reduces the need for American troops in those countries and the risk of politically unpalatable casualties. “He probably thinks this is already a controversial war,” says Christ Klep, an international relations analysts at the University of Utrecht. “I’d better not endanger my pilots and my special forces, so what else do I have? Unmanned aerial vehicles?

35 facts that will make you never want to eat fish again Next time you reach for a spicy tuna handroll, you may want to keep the following infographic in mind. Eating fish may seem like the safer choice when it comes to environmental impact, but things aren’t as good as they may appear. Did you know that there are no requirements for the humane slaughter of fish? Or that for every pound of shrimp caught, 26 pounds of other sea creatures were killed and tossed back into the sea?

More Fukushima Deaths: ''Leukemia-linked Disorder'' Killing Baby Seals Along California Coast By Melissa Dykes While officials continue to tell us everything is fine, and they essentially act like the Pacific Ocean is a Mr. Clean Magic Eraser for all the radiated water being continuously dumped into it from the crippled Fukushima Daiichi Nuclear Power Plant, we are getting reports of baby seals dying of cancer off the coast of California. Of the 46 weaned baby seals who have died in a San Francisco Bay rescue center this summer, it has been determined that the cause of death in 16 cases has been Disseminated Intravascular Coagulation — a condition that does not just spontaneously occur but is a factor found underlying another condition, things like tumors and blood cancers, but especially acute promyelocytic leukemia.

Supreme Court Blocks Climate Change Lawsuit Filed By States WASHINGTON — The Supreme Court unanimously ruled out a federal lawsuit Monday by states and conservation groups trying to force cuts in greenhouse gas emissions from power plants. The court said that the authority to seek reductions in emissions rests with the Environmental Protection Agency, not the courts. EPA said in December that it will issue new regulations by next year to reduce power plants' emissions of carbon dioxide, the chief greenhouse gas. The Obama administration has already started controlling heat-trapping pollution from automobiles and from some of the largest, and most polluting, industrial plants.

List of ongoing military conflicts Wikipedia list article Ongoing armed conflicts, as of May 2020. Major wars, 10,000+ deaths in current or past calendar year Wars, 1,000–9,999 deaths in current or past calendar year America's False History Allows the Powerful to Commit Crimes Without Consequence Journalist Robert Parry working at his desk. (Photo: Consortiumnews.com)Seasoned journalist Robert Parry offers a thoroughly researched account of how the Republican Party and neocons have conspired to creative a false narrative about America's political and constitutional history. In particular, Parry tenaciously documents the accusations that he has pursued for years: that the Nixon campaign undermined peace talks that likely would have ended the Vietnam War in 1968 or 1969 in order to win the presidency; and that the Reagan campaign conspired with the revolutionary Iranian government to ensure that the US embassy hostages were not released before the 1980 election in order to seal Jimmy Carter's defeat. Furthermore, Parry ties together calamitous US foreign policy decisions with the "stolen narrative" that has suppressed the true account of how the neocons and right wing rose to power in the US. Robert Parry: The current conventional wisdom about George H.W.

No Soil & Water Before 100% Renewable Energy Many say we can have 100% renewable energy by 2050. This is factually incorrect. We can have 100% renewable electricity production by 2050. But electricity production is only 18% of total world energy demand. Radioactive cesium-137 from Fukushima now detected off coast of Canada (NaturalNews) The first radioactive material from the 2011 Fukushima nuclear disaster has now been detected in the coastal waters of North America, according to a study conducted by researchers from Woods Hole Oceanographic Institution. "Radioactivity can be dangerous, and we should be carefully monitoring the oceans after what is certainly the largest accidental release of radioactive contaminants to the oceans in history," researcher Ken Buesseler said. In March 2011, a massive earthquake and tsunami caused three separate nuclear meltdowns at Japans' Fukushima Daiichi nuclear power plant.

Thats what we get for being complacent and believing the media bullshit, I don't know if you ever bothered to look at how the media played the public back then.. Anyway we can learn from this! by paololopezbonilla Jun 6