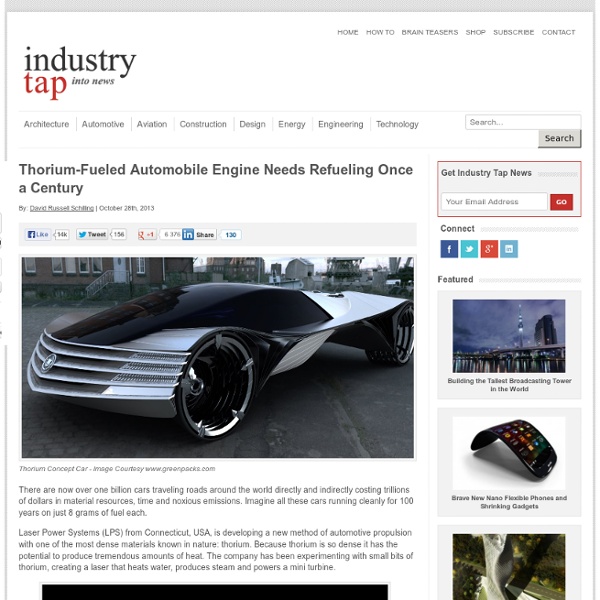 By: David Russell Schilling | October 28th, 2013 Thorium Concept Car - Image Courtesy www.greenpacks.com There are now over one billion cars traveling roads around the world directly and indirectly costing trillions of dollars in material resources, time and noxious emissions. Imagine all these cars running cleanly for 100 years on just 8 grams of fuel each. Laser Power Systems (LPS) from Connecticut, USA, is developing a new method of automotive propulsion with one of the most dense materials known in nature: thorium. Cadillac World Thorium Fuel Concept (Image Courtesy www.cutedesign.com) Current models of the engine weigh 500 pounds, easily fitting into the engine area of a conventionally-designed vehicle. The idea of using thorium is not new. According to Robert Hargraves, “low or non-CO2 emitting energy sources must be cheaper than coal or will ultimately fail to displace fossil fuels.” Hargraves sees factories and other industrial concerns using thorium as well. Thanks for reading! Related:  Vehicles

'All Clear' UV Light Bottle Purifies Water in 60 Seconds On Friday afternoon, I plugged my water bottle into a laptop USB port for a charge. Saturday found me in the woods of Wisconsin, dipping the bottle into a lake then pressing a button to purify its contents for a drink. The $99 bottle, called the All Clear UV Microbiological Water Purifier, is made by CamelBak. Specifically, the UV light “destroys microbe DNA,” as CamelBak puts it. The full All Clear kit This technology is not new. In the outdoors industry, Hydro-Photon has sold its UV-based SteriPEN product for more than 10 years. CamelBak’s All Clear is a similar concept but with a different design. The goal with All Clear is simple and quick purification. Digital countdown on UV cap That’s it. The system is slick. Also, not all water works in the system. CamelBak recommends water that is “at least as clear as lemonade.” Personally, I’ve used UV purifiers around the world, from Patagonia to Nepal. How do you know it works? Shop the GearJunkie Store

Incredible Technology: Inflatable Aircraft Could Cruise Venus Skies Editor's Note: In this weekly series, SPACE.com explores how technology drives space exploration and discovery. A big robotic airship could ply the skies of Venus for up to a year, giving scientists an unprecedented look at Earth's hellishly hot "sister planet," the craft's developers say. For the past year, engineers at aerospace firms Northrop Grumman and L'Garde have been working on an unmanned concept vehicle called the Venus Atmospheric Maneuverable Platform. Further, no big breakthroughs are required to get VAMP — which remains in the design phase — up and running, team members say. "There are no major technology unknowns," Northrop Grumman's Kristen Griffin told SPACE.com in December at the American Geophysical Union's annual fall meeting in San Francisco. Planet Venus: Quiz Yourself on Venus Facts Planet Venus is often likened to Earth but with a runaway greenhouse problem. 0 of 10 questions complete A Venus airship VAMP is a big but incredibly light inflatable aircraft.

Thorium (Updated March 2014) Thorium is more abundant in nature than uranium.It is fertile rather than fissile, and can only be used as a fuel in conjunction with a fissile material such as recycled plutonium.Thorium fuels can breed fissile uranium-233 to be used in various kinds of nuclear reactors.Molten salt reactors are well suited to thorium fuel, as normal fuel fabrication is avoided. The use of thorium as a new primary energy source has been a tantalizing prospect for many years. Extracting its latent energy value in a cost-effective manner remains a challenge, and will require considerable R&D investment. This is occurring preeminently in China, with modest US support. Nature and sources of thorium Thorium is a naturally-occurring, slightly radioactive metal discovered in 1828 by the Swedish chemist Jons Jakob Berzelius, who named it after Thor, the Norse god of thunder. When pure, thorium is a silvery white metal that retains its lustre for several months. Thorium as a nuclear fuel

3D-Printed Human Cells Will Replace Animal Testing in Five Years, Says Bioengineer Expert 3D-printing could soon bring about an end to animal abuse in drug testing, according to bioengineering expert Alan Faulkner-Jones. Speaking at the 3D Printshow Hospital in London, the Heriot Watt University researcher said that 3D-printed human cells could eliminate the need to test new drugs on animals as soon as 2018. Using a bio-printer hacked together from a MakerBot printer, Faulkner-Jones demonstrated how human stem cells can be printed into micro-tissues and micro-organs. These miniature biological systems, otherwise known as systems-on-a-chip, not only resemble humans genetically, but they also respond as if it is a living miniature organ. This allows for more effective drugs tests that show side effects first hand. Faulkner-Jones believes the technology could replace cruel and often inaccurate animal testing within five years. What’s more, it may also become possible to personalize drugs by testing them with the cells of the person who actually needs them.

Neuro Cars to Be Driven by Thought, Mood and Emotion Kevin SamsonActivist Post The heavy global investment in neuroscience has been shown to have put an emphasis on military-level mind control and narrative psyops. As is typical, military research is beginning to trickle down in to the consumer market with an array of inexpensive devices that promise the ability to track brainwaves for a variety of applications. Naturally, the narrative being put forth to convince people to have their minds invaded focuses on safety and convenience. Enter the Neuro Car; it's not just a video game. Nissan recently unveiled its Nismo smart watch that can monitor a driver's biometric information. The watch and car will be in constant communication, your car can update you via your watch whenever it needs an oil change or its tires rotated. Let's take a look at some other inventions planned to merge minds and vehicles.... Some people have commented that the solution to the surveillance and hacking is simply to not buy these products. Yes, rather awesome.

KissKissBankBank — Soutenons la création ensemble ! Accidental discovery dramatically improves electrical conductivity Quite by accident, Washington State University researchers have achieved a 400-fold increase in the electrical conductivity of a crystal simply by exposing it to light. The effect, which lasted for days after the light was turned off, could dramatically improve the performance of devices like computer chips. WSU doctoral student Marianne Tarun chanced upon the discovery when she noticed that the conductivity of some strontium titanate shot up after it was left out one day. "It came by accident," said Tarun. The phenomenon they witnessed—"persistent photoconductivity"—is a far cry from superconductivity, the complete lack of electrical resistance pursued by other physicists, usually using temperatures near absolute zero. And while other researchers have created persistent photoconductivity in other materials, this is the most dramatic display of the phenomenon. The research, which was funded by the National Science Foundation, appears this month in the journal Physical Review Letters.

Self-Driving Pod Cars Are Coming to the U.K. in 2015 | Autopia Photo: Lee Durant/Ultra Global PRT The U.K. town of Milton Keynes isn’t waiting for Google or General Motors to bring autonomous cars to the masses. Instead, it’s enlisting a fleet of 100 self-driving pods to run between the city’s central train station, shopping center, and office parks beginning in 2015. The autonomous pods will carry two passengers, plus shopping bags, luggage, or a baby stroller, and will travel up to 12 mph in dedicated lanes inside the city. The first 100 pods are set to take to the streets in 2015 as part of a £65 million infrastructure investment by Milton Keynes, with a full roll-out of the pods coming in 2017, when passengers will pay £2 per trip and summon their rides through a smartphone app. The pods — similar to those used at Heathrow airport since 2011 — will be fully electric, with motors mounted at each wheel and charging handled by an inductive system set up along the route.

Tesla Hyperloop Train Can Travel At 4000 mph Billionaire entrepreneur Elon Musk has revealed more information on his top-secret Hyperloop, a vehicle he says will take passengers from Los Angeles to San Francisco in a mere half hour. The Tesla Motors co-founder called the fast train “a cross between a Concorde and a railgun and an air hockey table” at the D11 Conference earlier this year. The pneumatic tube train system will be “twice as fast as what an average aircraft can do.” Once constructed, the Hyperloop will leave as soon as passengers board as opposed to running on a strict schedule. The train will also be weather immune which might put a damper on some people who still enjoy the occasional snow day. Some are calling Musk’s idea pure insanity, but others including physicist Brian Dodson of Gizmag, are willing to give the Hyperloop a chance after examining all of its parts. English please?

Au Bout Du Monde - Konstantin Bronzit (1998).avi Car Answers -- Electric Cars For Sale Today (2013) Are electric cars your thing? Good, this is a page packed full of electric car facts, including electric cars for sale in 2014 and their prices. Electric car answers for any question you have should be on this page. Keep up with the latest EV news here, and keep up with the latest EV sales updates here. Beyond the info below, the following posts may interest you: Basic Electric Car Answers Electric vehicles (EVs) run on electricity.Some EVs run 100% on electricity, while others (hybrid electric vehicles) run partly on electricity and partly on some other fuel (e.g., gas).100% electric vehicles and plug-in hybrid electric vehicles (PHEVs) are clearly much better for the environment (and, thus, humans) than their gasoline-powered equivalents. Currently Available Electric Cars The following are electric cars that are for sale today today or are supposed to be for sale at some point in 2014. Links on the car names are mostly to our story history for these cars. Nissan Leaf – $28,800 ($21,300)