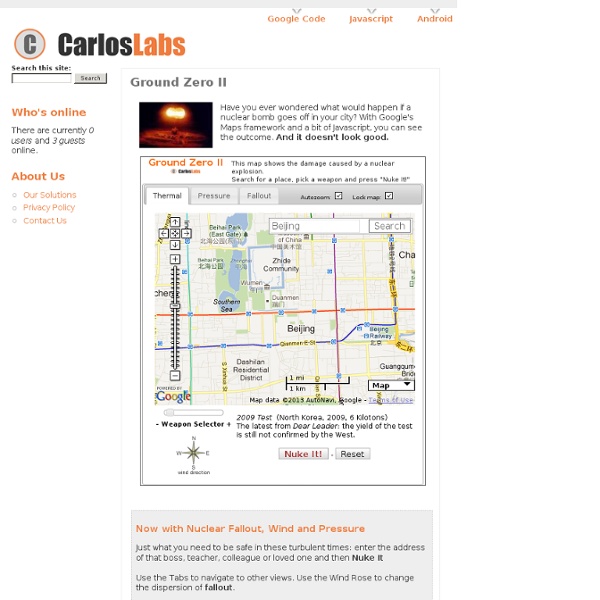 Have you ever wondered what would happen if a nuclear bomb goes off in your city? With Google's Maps framework and a bit of Javascript, you can see the outcome. And it doesn't look good. Now with Nuclear Fallout, Wind and Pressure Just what you need to be safe in these turbulent times: enter the address of that boss, teacher, colleague or loved one; select a weapon and a damage map mode. By clicking repeatedly on "Fallout" you can change the wind direction at the moment of the explosion. Where's the older version? Copy and paste the following to mashup the Ground Zero II script into your own website or blog: A ZIP archive with the source code can be found here. Science Caveat The damage caused by a nuclear explosion is affected by a multitude of variables, and some of these require powerful super-computers to be simulated properly. Fallout shows the possible dispersion of radioactive isotopes after six hours of the explosion, assuming a constant gentle breeze. Project: 200903A

Repeal the Drinking Age - Jeffrey A. Tucker Somehow, and no one seems to even imagine how, this country managed to survive and thrive before 1984 without a national minimum drinking age. Before that, the drinking question was left to the states. In the 19th century, and looking back even before — prepare yourself to imagine horrific anarchistic nightmares — there were no drinking laws anywhere, so far as anyone can tell. The regulation of drinking and age was left to society, which is to say families, churches, and communities with varying sensibilities who regulated such things with varying degrees of intensity. Probably some kids drank themselves silly — and we all know that this doesn't happen now (wink, wink) — but many others learned to drink responsibly from an early age, even drinking bourbon for breakfast. Really, it is only because we are somehow used to it that we accept the complete absurdity of a national law that prohibits the sale of beer, wine, and liquor to anyone under the age of 21. Do we really believe it?

WW2 People's War - Timeline Starting over: Let's decimalise time - science-in-society - 28 March 2011 We have seven days a week because the Babylonians named one for each planet they knew. There are 12 hours in each day and each night because they gave one hour to each sign of the zodiac. Sixty minutes in an hour because they thought 60 an auspicious number. Divide the day into 10 "hours", with 100 "minutes" in each hour and 100 "seconds" in each minute. China was working with a decimal system millennia ago.

World Building Links | Enderra There are a many great resources on the web when it comes to worldbuilding, and some of the best are not even dedicated to the craft but are generic scientific resources. I’ll attempt to collect everything that is useful – and I need your help to update this list. Please send me links you think should be included, and I’ll take a look. Since there are so many links, I’ll group them into categories: About World Building – What is worlbuilding all about? Linguistics and Con-Languages Mark Rosenfelder, aka the Zompist, has a good site on conlanguages. Real World Resources If you base your world on our current Earth, you’ll sooner or later have to look up facts that you do not know. Wikipedia is always a good starting point for research.The CIA World Factbook answers all the basic questions you have about the nations of Earth. Everything else Articles that didn’t fit elsewhere. Like this: Like Loading...

Destructive Effects Counting the Dead Chaotic conditions made accurate accounts most difficult. Some victims were vaporized instantly, many survivors were horribly disfigured, and death from radiation was uncertain—it might not claim its victims for days, weeks, months, or even years. The initial death count in Hiroshima, set at 42,000–93,000, was based solely on the disposal of bodies, and was thus much too low. Later surveys covered body counts, missing persons, and neighborhood surveys during the first months after the bombing, yielding a more reliable estimate of 130,000 dead as of November 1945. Additional counts indicated high levels of short-term mortality in both cities: —Over 90% of persons within 500 meters (1,600 ft.) of ground zero in both cities died. Most persons close to ground zero who received high radiation dosages died immediately or during the first day. *Figure 11. *Figure 12. Injury Phases Stages of A-bomb illness 1. —primary (flash burns) —secondary (scorch, contact, and flame burns) 2.

The Hidden Message in Pixar’s Films | Science Not Fiction I love Pixar. Who doesn’t? The stories are magnificently crafted, the characters are rich, hilarious, and unique, and the images are lovingly rendered. Popular culture is often dismissed as empty “popcorn” fare. Buried within that constant and complex goodness is a hidden message. Now, this is not your standard “Disney movies hide double-entendres and sex imagery in every film” hidden message. What if I told you they were preparing us for the future? Before we begin, I ask you to watch the video below. People love these films. To understand Pixar films, one must first to go back to Disney before Toy Story was released – to be precise, The Lion King. The Lion King gives us a clean slate. The relationship between humans and the non-human characters is critical to understanding Pixar’s movies. The third rule is that at least one main character is an intelligent being that isn’t a human. You can see where I’m going here. Non-humans are sentient beings.

Patricia C. Wrede's Worldbuilder Questions: Index Index About This Page This page is not Patricia Wrede's web site. This page is not for young fans of Patricia C. This page is about creating fantasy worlds. This page (actually the many pages in this section) are derived of a number of postings Ms. Originally the questions did not have the sort-of-alphabetic arrangement I have given them here. I put the questions on the web many years ago and obtained Ms. The implications of all of that are: these pages have no connection with any software product, any building-block toys, game creation system, or any other product which uses the word "Worldbuilder" as a trademark. Index of Patricia C.

Average Faces From Around The World Added on Feb 08, 2011 / Category : StrangeNews / 228 Comments Finding the average face of people across the world was a tough job but someone had to do it. This guy basically takes a thousands and thousands images of everyday people from any city and the software makes an 'average' of the people, giving one final portrait. Take a look at this amazing project called "World of Facial Averages" If you like this article, Share it with the world: