Getting Started: Building a Chrome Extension 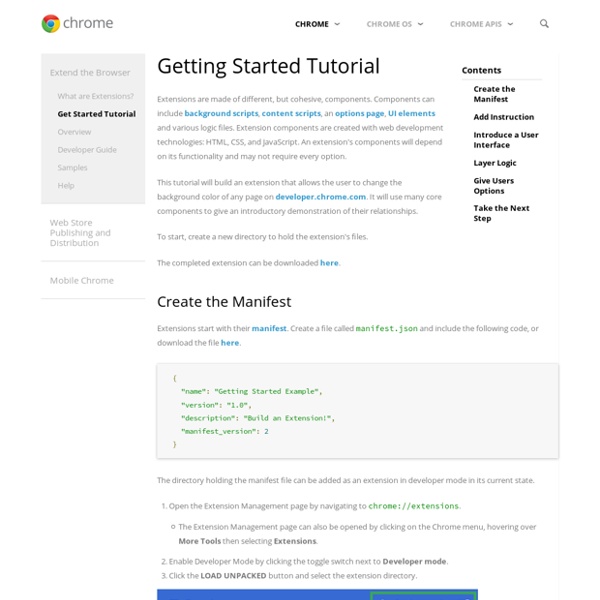 Extensions are made of different, but cohesive, components. Components can include background scripts, content scripts, an options page, UI elements and various logic files. Extension components are created with web development technologies: HTML, CSS, and JavaScript. An extension's components will depend on its functionality and may not require every option. This tutorial will build an extension that allows the user to change the background color of any page on developer.chrome.com. To start, create a new directory to hold the extension's files. The completed extension can be downloaded here. Extensions start with their manifest. The directory holding the manifest file can be added as an extension in developer mode in its current state. Open the Extension Management page by navigating to Ta-da! Although the extension has been installed, it has no instruction. Background scripts, and many other important components, must be registered in the manifest. <! What's next? Related:  Empty Dropzone

editors - Save HTML from clipboard as markdown text storage Overview This API has been optimized to meet the specific storage needs of extensions. It provides the same storage capabilities as the localStorage API with the following key differences: User data can be automatically synced with Chrome sync (using storage.sync). Manifest You must declare the "storage" permission in the extension manifest to use the storage API. Usage To store user data for your extension, you can use either storage.sync: or storage.local: When using storage.sync, the stored data will automatically be synced to any Chrome browser that the user is logged into, provided the user has sync enabled. When Chrome is offline, Chrome stores the data locally. Confidential user information should not be stored! The storage.managed storage is read-only. Storage and throttling limits chrome.storage is not a big truck. For details on the current limits of the storage API, and what happens when those limits are exceeded, please see the quota information for sync and local. Examples

Creating a Simple Chrome Extension As a front-end developer there are a lot of different technologies to keep up with. Whether I’m working with AngularJS or trying to set up Grunt tasks, I find myself having to look up a lot of things. To make that easier on myself, I decided to write Google Chrome extensions to simplify the process. It turns out that’s pretty darn easy! There are only two files you’ll need to create to make a Chrome extension: manifest.json and background.js. manifest.json The first file we need is manifest.json. The majority of this manifest’s contents are fairly self-explanatory, but the two we care most about right now are the “omnibox” and “background” settings. You can find out more about Background Pages here. The background.js file is where all the magic happens for this extension, but you aren’t limited to using a single background script. background.js Next we need to create a background.js file. Omnibox Events For now though, we only need one event: onInputEntered. Testing it out Next Steps

Precise web clipping to Markdown with Bullseye GrabLinks went over pretty well, so I’ve been motivated to finish up a similar project I had going. It’s called Bullseye, and it lets you click a section of a webpage and “Markdownify” just that content. It’s like Readability, but you get to just tell it which part is the good stuff. I improved the rollover highlighting so that it doesn’t highlight every parent element, just the one it’s actually going to grab. I added this fix to GrabLinks as well, so if you have that installed you should already be seeing the improvement. Like GrabLinks, Bullseye loads from a GitHub Gist and will “auto-update” when I make changes. I also improved the relative-url-to-absolute tricks, so images in the page that are locally linked will still work when you preview the Markdown elsewhere. Installation Just drag the link below to your bookmarks bar. Using Bullseye Making use of it is simple. Technical details It’s kind of a cool trick. Future

Making Your First Google Chrome Extension Martin Angelov The Google Chrome web browser is slowly growing in popularity. This is no surprise, as it is a great browser, and is backed by no other than Google. With the introduction of extensions, Google Chrome became even more agile and powerful. In this tutorial, we are going to create a simple extension, which puts a small icon next to Chrome’s address bar, and, when clicked, will fetch Tutorialzine’s RSS feed and display a fancy preview of our latest tutorials. First a few words about extensions. How Extensions Work Extensions in Google Chrome are basically webpages. The extensions are, however, treated a bit differently than your regular webpage, which is displayed in the browser. You also have the benefit (or the limitation) that your extension runs only on one browser. Tutorialzine's Google Chrome Extension Developing extensions Extension are packed in a .crx file (arenamed zip file) but during development, you can map your working folder as an extension. Step 1 – Manifest.json <!

Web Apps and Google Sites Gadgets - Google Apps Script If you build a user interface for a script, you can publish the script as a web app. For example, a script that lets users schedule appointments with members of a support team would best be presented as a web app so that users can access it directly from their browsers. Both standalone scripts and scripts bound to Google Workspace applications can be turned into web apps, so long as they meet the requirements below. Requirements for web apps A script can be published as a web app if it meets these requirements: It contains a doGet(e) or doPost(e) function.The function returns an HTML serviceHtmlOutput object or a Content serviceTextOutput object. Request parameters When a user visits an app or a program sends the app an HTTP GET request, Apps Script runs the function doGet(e). For instance, you could pass parameters such as username and age to a URL as shown below: Then, you can display the parameters like so: In the above example, doGet(e) returns the following output: Permissions

Developing Google Chrome Extensions It's no secret that my favorite browser is Google Chrome. I like it because it's fast, reliable, it doesn't crash (very often), and it looks good. There's also something else which I find even more valuable. So at the end of this article you will find a working Chrome extension which uses most of the techniques explained below. I always encourage people to use better tools to speed up their workflow. Thankfully there is a way to test your extension without having to upload it to Chrome's web store. Make sure that you check Developer mode and click the Load unpacked extension... button. Here's a diagram of the architecture for a Chrome extension: And now let's take a closer look at each element within the architecture. The entry point of your extension is the manifest.json file. The required properties are name, version, and manifest_version. Every extension has an invisible background page which is run by the browser. Here is how you should describe it in the manifest:

Is Bernie Sanders Really Unelectable? If Bernie Sanders continues to improve his poll numbers and becomes a genuine threat to Hillary Clinton’s nomination, undecided Democrats will increasingly hear from Clinton supporters that Mr. Sanders is not electable. Frequently, the electability argument is simply a normal campaign tactic, but it occasionally takes on ugly undertones. In 2008, many Democrats were told that the country wasn’t ready for an African-American president and therefore they would be foolish to support Barack Obama. This may not exactly have been a racist appeal, but if not, it was very close. For the Democrats, the electability narrative was at its most clear and compelling from roughly 1988-2000. Since 2004, however, the electability equation for the Democrats has been in flux. In reality, both Ms. Mr. Nonetheless, even the most ardent supporter of Mr. And if Mr. Lincoln Mitchell is national political correspondent at the Observer.

How to Create Chrome Apps and Extensions for your Website - Tutorial Today I published a Chrome app and an extension for this website in the Google Chrome store. I have never written apps for Chrome before but it turns out (see video tutorial) that one can write a basic Chrome app and push it to the Chrome store in less than five minutes. My Chrome app essentially adds an icon in Chrome’s New Tab page that takes you to the associated website upon clicking (much like any bookmark). The Chrome extension offers a little more functionality. Install Chrome App Install Chrome Extension Chrome is now the most popular web browser and it thus makes perfect sense to have some sort of a presence in the Chrome Store. Write a Chrome App for your Website This is easy. Add your website name in Line #2, put a short description of the website in line #3 (it should be less than 132 characters) and then replace labnol.org in lines #5 & #7 with your own website URL. Save the manifest.json file. Publish your Web App to the Chrome Store Create a Chrome Extension for your Website