Besse Cooper, world’s oldest living person offers tips on longevity. Besse Cooper is the oldest person in the world. (The Canadian Press, File) What does it take to live to be the oldest person on the planet? Besse Cooper knows. The American super centenarian celebrated her 116 th birthday on Saturday, a milestone that the Guinness Book of World Records says only eight people have ever reached. The oldest living person — she's held that title since 2011 — celebrated her birthday surrounded by friends and family in the nursing home where she resides in Monroe, Georgia.

So what are the secrets to her incredible longevity? Whether it's genes or lifestyle, we can't deny that Cooper offers some sound advice to living to a ripe old age: "I mind my own business," she also says. [See also: Celebrities who've aged gracefully ] Cooper isn't the only centenarian with tips to share on living an extended lifespan.

Watch the video below to learn about an 80-year-old woman with the memory of a 50-year-old. More from Shine on Yahoo!

A wake-up call on care for the elderly. When Dubai authorities revealed in October 2010 that 468 (out of about 8,000) elderly people in the emirate had not been provided care, the news was surprising to many. 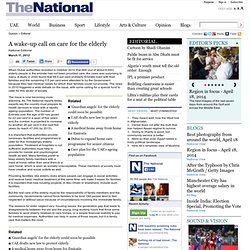 A study in 2000 found that 99.5 per cent of elderly Emiratis lived with their families and the remaining 0.5 per cent were attended to by the Government because they had medical needs for which their families could not provide. The news in 2010 triggered a wide debate on the issue, with some calling for a special fund to cater for this sector of society. The issue is now becoming more alarming. As The National reports today, experts say the country must prepare its health services to cope with a rapidly ageing population. The number of Emiratis over the age of 60 has grown by 22 per cent in a span of five years and the number is projected to increase by another 20 per cent in the next five years (to reach 47,000 by 2015). Andrew D. Blechman - author of LEISUREVILLE and PIGEONS. LEISUREVILLE Adventures in a World Without Children From the author of Pigeons comes a first-hand look at America’s senior utopias, gated retirement communities where no kids are allowed. 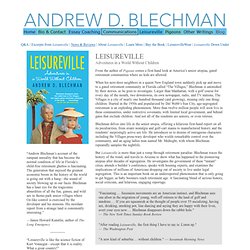 When his next-door neighbors in a quaint New England town suddenly pick up and move to a gated retirement community in Florida called “The Villages,” Blechman is astonished by their stories, so he goes to investigate. Larger than Manhattan, with a golf course for every day of the month, two downtowns, its own newspaper, radio, and TV stations, The Villages is a city of nearly one hundred thousand (and growing), missing only one thing: children.

Started in the 1950s and popularized by Del Webb’s Sun City, age-segregated retirement is an exploding phenomenon. More than twelve million people will soon live in these communities, under restrictive covenants, with limited local government, and behind gates that exclude children. Laura Carstensen: Older people are happier. Experts warn of UAE's greying population. Looking after a rapidly growing number of elderly people is one the most significant challenges facing health authorities, experts in geriatric care have warned. 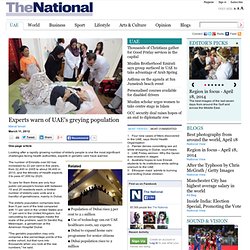 The number of Emiratis over 60 has increased by 22 per cent in five years, from 32,400 in 2005 to about 39,400 in 2010, and the Ministry of Health expects it to pass 47,000 by 2020. To care for them there are only four public old people's homes with between 10 and 20 residents each, a limited number of elderly-care units and a handful of geriatricians, mainly in Dubai. The elderly population comprises less than 5 per cent of the total compared with 11 per cent in the United States and 17 per cent in the United Kingdom, but calculating by percentages masks the scale of the problem, said Dr Senthil Raj Meenrajan, a geriatrician at the American Hospital Dubai.

"The geriatric population may only comprise a few percentage points of the entire cohort, but that runs into thousands when you look at the raw numbers," he said. Page 2 of 2. The Villages - Lifestyle. Jane Fonda: Life's third act.