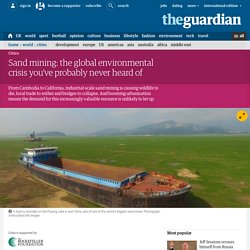 A genial, middle-aged businessman based near Shanghai, China, Fey says he is raking in the equivalent of £180,000 a year from trading in the humblest of commodities: sand. Fey often works in a fishing village on Poyang Lake, China’s biggest freshwater lake and a haven for millions of migratory birds and several endangered species. The village is little more than a tiny collection of ramshackle houses and battered wooden docks. It is dwarfed by a flotilla anchored just offshore, of colossal dredges and barges, hulking metal flatboats with cranes jutting from their decks. Fey comes here regularly to buy boatloads of raw sand dredged from Poyang’s bottom. The demand is voracious. Hundreds of dredgers may be on the lake on any given day, some the size of tipped-over apartment buildings. 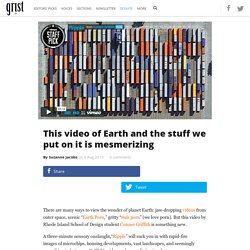 But this video by Rhode Island School of Design student Conner Griffith is something new. A three-minute sensory onslaught,“Ripple” will suck you in with rapid-fire images of microchips, housing developments, vast landscapes, and seemingly everything in between. Griffith’s video makes no distinction between what’s human-made and what’s nature-made, and all the pictures he uses are either extreme closeups or broad overhead views, so sometimes it’s hard to tell what you’re even looking at — is that marble?

Are those rivers? How big is that sandbank? So grab your good headphones and give it a watch. 35 facts that will make you never want to eat fish again. Next time you reach for a spicy tuna handroll, you may want to keep the following infographic in mind. 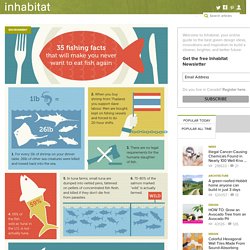 Eating fish may seem like the safer choice when it comes to environmental impact, but things aren’t as good as they may appear. Did you know that there are no requirements for the humane slaughter of fish? Or that for every pound of shrimp caught, 26 pounds of other sea creatures were killed and tossed back into the sea? Read on for 35 facts that may make you reconsider your next fishy meal. + Nuique The article above was submitted to us by an Inhabitat reader. Shark Finning. The Dizzying Grandeur of 21st-Century Agriculture. Our industrialized food system nourishes more people, at lower cost, than any comparable system in history. 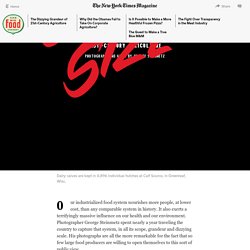 It also exerts a terrifyingly massive influence on our health and our environment. Photographer George Steinmetz spent nearly a year traveling the country to capture that system, in all its scope, grandeur and dizzying scale. His photographs are all the more remarkable for the fact that so few large food producers are willing to open themselves to this sort of public view. Cranberry cultivation began in Massachusetts, and it still brings to mind quaint images of New England. But the bogs that farmers have created in Wisconsin can be more efficient — they’re both flatter and neatly rectangular, making them easier for machines to fertilize, irrigate and harvest.

Lifts tip trucks to pour out their cranberry hauls. During its busiest season, Gary’s Gobblers might have up to 60,000 turkeys living on five acres of its 160-acre facility. By World War II, the J.R. No Soil & Water Before 100% Renewable Energy. Many say we can have 100% renewable energy by 2050. 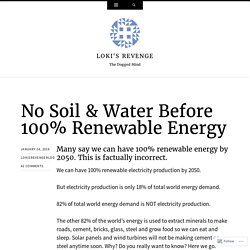 This is factually incorrect. We can have 100% renewable electricity production by 2050. But electricity production is only 18% of total world energy demand. 82% of total world energy demand is NOT electricity production. The other 82% of the world’s energy is used to extract minerals to make roads, cement, bricks, glass, steel and grow food so we can eat and sleep. TWED = Total World Energy Demand 18% of TWED is electrical grid generation. 82% of TWED is not electrical grid generation. In 20 years, solar & wind energy is up from 1% to 3% of TWED. Solar & wind power are projected to provide 6% of TWED by 2030.