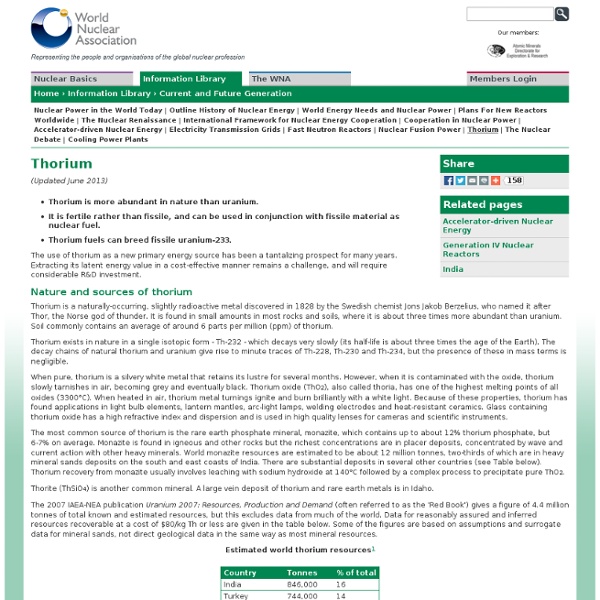 (Updated March 2014) Thorium is more abundant in nature than uranium.It is fertile rather than fissile, and can only be used as a fuel in conjunction with a fissile material such as recycled plutonium.Thorium fuels can breed fissile uranium-233 to be used in various kinds of nuclear reactors.Molten salt reactors are well suited to thorium fuel, as normal fuel fabrication is avoided. The use of thorium as a new primary energy source has been a tantalizing prospect for many years. Extracting its latent energy value in a cost-effective manner remains a challenge, and will require considerable R&D investment. This is occurring preeminently in China, with modest US support. Nature and sources of thorium Thorium is a naturally-occurring, slightly radioactive metal discovered in 1828 by the Swedish chemist Jons Jakob Berzelius, who named it after Thor, the Norse god of thunder. When pure, thorium is a silvery white metal that retains its lustre for several months. Thorium as a nuclear fuel

New age nuclear Credit: Justin Randall What if we could build a nuclear reactor that offered no possibility of a meltdown, generated its power inexpensively, created no weapons-grade by-products, and burnt up existing high-level waste as well as old nuclear weapon stockpiles? And what if the waste produced by such a reactor was radioactive for a mere few hundred years rather than tens of thousands? It may sound too good to be true, but such a reactor is indeed possible, and a number of teams around the world are now working to make it a reality. What makes this incredible reactor so different is its fuel source: thorium. Named after Thor, the warlike Norse god of thunder, thorium could ironically prove a potent instrument of peace as well as a tool to soothe the world’s changing climate. But nuclear power comes with its own challenges. A thorium reactor is different. That may not sound like much, but small changes in the global average can mask more dramatic localised disruptions in climate.

Thorium fuel cycle The thorium fuel cycle is a nuclear fuel cycle that uses the naturally abundant isotope of thorium, 232Th, as the fertile material. In the reactor, 232Th is transmuted into the fissile artificial uranium isotope 233U which is the nuclear fuel. Unlike natural uranium, natural thorium contains only trace amounts of fissile material (such as 231Th), which are insufficient to initiate a nuclear chain reaction. Additional fissile material or another neutron source are necessary to initiate the fuel cycle. In a thorium-fueled reactor, 232Th absorbs neutrons eventually to produce 233U. This parallels the process in uranium breeder reactors whereby fertile 238U absorbs neutrons to form fissile 239Pu. The thorium fuel cycle claims several potential advantages over a uranium fuel cycle, including thorium's greater abundance, superior physical and nuclear properties, better resistance to nuclear weapons proliferation[1][2][3] and reduced plutonium and actinide production.[3] History[edit] [edit]

Uranium Is So Last Century — Enter Thorium, the New Green Nuke | Magazine Photo: Thomas Hannich The thick hardbound volume was sitting on a shelf in a colleague’s office when Kirk Sorensen spotted it. A rookie NASA engineer at the Marshall Space Flight Center, Sorensen was researching nuclear-powered propulsion, and the book’s title — Fluid Fuel Reactors — jumped out at him. Published in 1958 under the auspices of the Atomic Energy Commission as part of its Atoms for Peace program, Fluid Fuel Reactors is a book only an engineer could love: a dense, 978-page account of research conducted at Oak Ridge National Lab, most of it under former director Alvin Weinberg. At the time, in 2000, Sorensen was just 25, engaged to be married and thrilled to be employed at his first serious job as a real aerospace engineer. Weinberg and his men proved the efficacy of thorium reactors in hundreds of tests at Oak Ridge from the ’50s through the early ’70s. Today, however, Sorensen spearheads a cadre of outsiders dedicated to sparking a thorium revival.

Accelerating Future » A Nuclear Reactor in Every Home Sometime between 2020 and 2040, we will invent a practically unlimited energy source that will solve the global energy crisis. This unlimited source of energy will come from thorium . A summary of the benefits, from a recent announcement of the start of construction for a new prototype reactor: There is no danger of a melt-down like the Chernobyl reactor. If nuclear reactors can be made safe and relatively cheap, how popular could they get? It depends on how cheap we’re talking about. State-of-the-art nuclear reactors, such as Westinghouse’s AP1000 , cost $1.5 billion to build and produce 1.1 gigawatts of electricity. The AP1000 is a Generation III reactor, a new class of reactor that started coming online in 1996. Commonwealth Edison, the utility serving the Chicago area, completed its Dresden nuclear plants in 1970-71 for $146/kW, its Quad Cities plants in 1973 for $164/kW, and its Zion plants in 1973-74 for $280/kW. That something is huge safety restrictions. Anti-nuclear:

Plutonium Plutonium is the heaviest primordial element by virtue of its most stable isotope, plutonium-244, whose half-life of about 80 million years is just long enough for the element to be found in trace quantities in nature.[3] Plutonium is mostly a byproduct of nuclear reactions in reactors where some of the neutrons released by the fission process convert uranium-238 nuclei into plutonium.[4] Both plutonium-239 and plutonium-241 are fissile, meaning that they can sustain a nuclear chain reaction, leading to applications in nuclear weapons and nuclear reactors. Plutonium-240 exhibits a high rate of spontaneous fission, raising the neutron flux of any sample containing it. The presence of plutonium-240 limits a plutonium sample's usability for weapons or its quality as reactor fuel, and the percentage of plutonium-240 determines its grade (weapons grade, fuel grade, or reactor grade). Plutonium-238 has a half-life of 88 years and emits alpha particles. Characteristics Physical properties

Beta particle Alpha radiation consists of helium nuclei and is readily stopped by a sheet of paper. Beta radiation, consisting of electrons or positrons, is halted by an aluminum plate. Gamma radiation is dampened by lead. Beta particles are high-energy, high-speed electrons or positrons emitted by certain types of radioactive nuclei such as potassium-40. β− decay (electron emission)[edit] Beta decay. An unstable atomic nucleus with an excess of neutrons may undergo β− decay, where a neutron is converted into a proton, an electron and an electron-type antineutrino (the antiparticle of the neutrino): n → p + e− + ν e This process is mediated by the weak interaction. Beta decay commonly occurs among the neutron-rich fission byproducts produced in nuclear reactors. β+ decay (positron emission)[edit] Unstable atomic nuclei with an excess of protons may undergo β+ decay, also called positron decay, where a proton is converted into a neutron, a positron and an electron-type neutrino: p → n + e+ + ν e Uses[edit]