How to Build a Chrome Extension 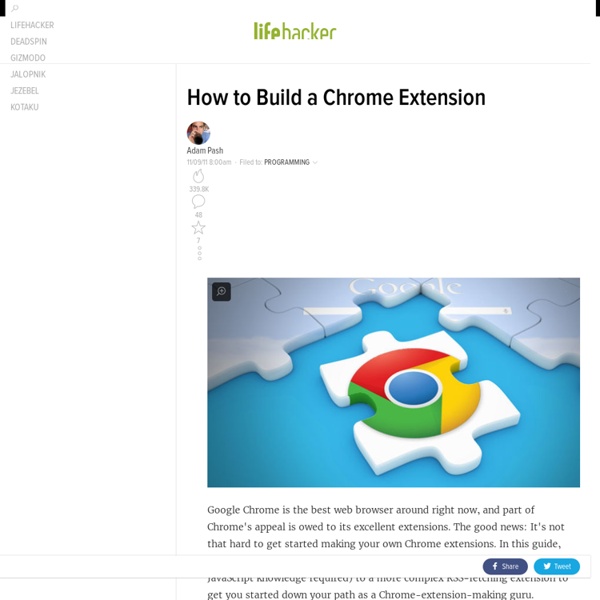 The Car Repairs You Can (Seriously) Do Yourself, Despite Your Abilities Replacing belts is not something you just swap, at least on newer cars. On only cars, like early 80s or older, it was feasible. With cars from that era there was often a lot of room within the engine bay. On anything from the 90s on the bay is so cramped that you're going to have to do a lot of dismantling to get at belts. And if you're looking at swapping the timing belt then on some cars you might even have to lift the engine. Something like the alternator has the potential for being nearly as bad, depending on where the automaker likes to stick it. The first thing anyone considering to work on their car should do is buy a service manual. Brakes are relatively easy to do, but it's obviously a critical component on the car and there are things you need to keep in mind.

How to Calibrate Your HDTV and Boost Your Video Quality in 30 Minutes or Less Don't know about you... but TVs I've owned have Store and Home modes, Store is horribly bright, high contrast, Home is sensibly done. Last time this article came around it only needed a DVD player. Now you've made it even harder to do. You *can* use a DVD player, but considering no DVD player is capable of 1080p/i display, it wouldn't make much sense. That said, "Store" or "Cinema" or "Vivid" is the mode warned against in the open.

storage Overview This API has been optimized to meet the specific storage needs of extensions. It provides the same storage capabilities as the localStorage API with the following key differences: User data can be automatically synced with Chrome sync (using storage.sync). Your extension's content scripts can directly access user data without the need for a background page. A user's extension settings can be persisted even when using split incognito behavior. Manifest You must declare the "storage" permission in the extension manifest to use the storage API. Usage To store user data for your extension, you can use either storage.sync: or storage.local: When using storage.sync, the stored data will automatically be synced to any Chrome browser that the user is logged into, provided the user has sync enabled. When Chrome is offline, Chrome stores the data locally. Confidential user information should not be stored! The storage.managed storage is read-only. Storage and throttling limits Examples

How to Take Your First Coding Project from Start to Finish I've used various versions of Windows for years, Linux in various flavours for another few years, and OS X for about 2-3 years total. I'm now a convert to OS X (though proudly not part of the cult of Mac — I enjoy the OS, I don't want Jobs' offspring) for general desktop use, switching to Windows for gaming. I find app quality is generally significantly higher on OS X than Windows (and certainly Linux). Do note the word "generally" — some of this stuff is cross-platform and in some cases Windows offers something better! The drawback of this is that most of it costs a couple of bucks, but that's a small price to pay if you're using your computer for various tasks daily. The UNIX core and bash are very important to me. User experience also plays a large part. Then there are the extras, like the *virtual* immunity to malware.

How to Build a Computer from Scratch, Lesson 4: Installing Your Operating System Ah, good eye! So, generally, your motherboard runs all RAM at the lowest speed (correct me if I'm wrong on any nuance of that particular fact, guys). As I mentioned in part 2, RAM speeds don't really matter. You're not going to get any noticeable difference from 300MHz in your RAM. However, where those RAM speeds DO come in useful is if you overclock your processor. Many of today's processors are tightly linked with the RAM, meaning that if you raise the clock speed of your processor, you also raise the clock speed of your RAM. So in the end? RAM speed do provide performance increase, visible in memory intensive task, such as photo editing, CAD or gaming. Your problem is easy to solve. Hope this helps. :) (please keep posted) I had this problem with my new build I bought some 1600 ram but it was running at 1333 on auto. Also, if I recall correctly, there are dividers associated with the bus speed and memory speed so it's still possible to overclock the CPU and keep the RAM in spec.

Getting Started: Building a Chrome Extension Extensions are made of different, but cohesive, components. Components can include background scripts, content scripts, an options page, UI elements and various logic files. Extension components are created with web development technologies: HTML, CSS, and JavaScript. An extension's components will depend on its functionality and may not require every option. This tutorial will build an extension that allows the user to change the background color of any page on developer.chrome.com. It will use many core components to give an introductory demonstration of their relationships. To start, create a new directory to hold the extension's files. The completed extension can be downloaded here. Extensions start with their manifest. The directory holding the manifest file can be added as an extension in developer mode in its current state. Open the Extension Management page by navigating to Ta-da! Although the extension has been installed, it has no instruction. <! What's next?

Terminology, Syntax, & Introduction - A Beginners Guide to HTML & CSS Before beginning our journey to learn HTML and CSS it is important to understand the differences between the two languages, their syntax, and some common terminology. As an overview, HTML is a hyper text markup language created to give content structure and meaning. CSS, also known as cascading style sheets, is a presentation language created to give content style and appearance. To put this into laymen terms, HTML determines the structure and meaning of content on a web page while CSS determines the style and appearance of this content. Taking this concept a bit further, the HTML p element is used to display a paragraph of text on a web page. Common HTML Terms When getting started with HTML you are likely to hear new, and often strange, terms. Elements Elements are designators that define objects within a page, including structure and content. Tags Elements are often made of multiple sets of tags, identified as opening and closing tags. <a>... Attributes HTML Document Structure & Syntax <!

Stream Your Music Online From Wired How-To Wiki Vintage radio photo by monogatari via Flickr You've spent a lot of time and money collecting digital music. But let's say you want to take that library to go? This article is a wiki. Step 1: Host it somewhere Most web hosts offer data plans around $10 per month that come with plenty of storage and bandwidth to hold and serve your music. Besides the cost, you trade off a good deal of control over the data because it resides on some machine out there in the ether. Hosting music on your own computer using a broadband connection is a preferable option, especially since you know exactly where it is and there's is no need to transfer your music anywhere. Tip: Webmonkey.com has an excellent introduction to using Dynamic DNS.Tip: Dan Hilgert also has an explanation of his Dynamic DNS setup and streaming music guide. Step 2: Create a playlist Perhaps the easiest way to get your music online is to use your favorite music player. Extended M3U The XSPF format is below. <?

Making Your First Google Chrome Extension Martin Angelov The Google Chrome web browser is slowly growing in popularity. This is no surprise, as it is a great browser, and is backed by no other than Google. It also provides great tools for web developers and I find myself using it more and more (actually Firebug is the only thing keeping me from crossing to the other side). With the introduction of extensions, Google Chrome became even more agile and powerful. In this tutorial, we are going to create a simple extension, which puts a small icon next to Chrome’s address bar, and, when clicked, will fetch Tutorialzine’s RSS feed and display a fancy preview of our latest tutorials. First a few words about extensions. How Extensions Work Extensions in Google Chrome are basically webpages. The extensions are, however, treated a bit differently than your regular webpage, which is displayed in the browser. You also have the benefit (or the limitation) that your extension runs only on one browser. Tutorialzine's Google Chrome Extension <!

The Always Up-To-Date Guide to Rooting the Most Popular Android Phones We love Android, but rooting your phone can give you the opportunity to do so much more than your phone can do out of the box—whether it’s wireless tethering, speeding it up with overclocking, or customizing the look of your phone with themes. Here’s what you need to know about the rooting process, and where to find a guide for your phone. Update: This used to be our always up-to-date rooting guide, which proved to be too large an undertaking for us to keep up. It was a nice try, but seeing as we only have a few Android phones to test, we couldn’t reliably keep it up to date. So, we’ve removed the links to individual rooting instructions and kept this as a general resource for those of you that want to get into rooting (though many of the old comments still remain). Check out the glossary below to get acquainted with important rooting terms, then check out the FAQ for more info on your burning questions. What Is Rooting, Exactly? Glossary of Rooting Terms Frequently Asked Rooting Questions

What is the universal edibility test?" G­etting lost or stranded in the wilderness is serious business, and ­you need to make sound decisions to give yourself the best chance at survival. It also helps to know some basic wilderness survival skills. To make sure you're safe from the elements, you'll need to know how to build a shelter. But just because you can live without food doesn't mean you should. It's dangerous to eat a plant you're unsure of, especially in a survival scenario. If you're in a survival situation and you don't have a book on local edible plants, there is a test you can perform to give yourself a good shot at eating the right thing.