Works to ensure that the nation's stockpile of nuclear weapons is safe and secure. Also works to ensure the safety of naval nuclear reactors, is the first responder in case of nuclear emergency, and works on worldwide nuclear nonproliferation issues. 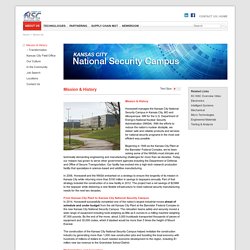 Department of Energy’s National Nuclear Security Administration (NNSA). With the efforts to reduce the nation’s nuclear stockpile, we deliver safe and reliable products and services for national security programs in the most cost efficient way possible. Beginning in 1949 as the Kansas City Plant at the Bannister Federal Complex, we’ve been solving some of the NNSA’s most intricate and technically demanding engineering and manufacturing challenges for more than six decades.

Today, our mission has grown to serve other government agencies including the Department of Defense and Office of Secure Transportation. In 2006, Honeywell and the NNSA embarked on a strategy to ensure the longevity of its mission in Kansas City while returning more than $100 million in savings to taxpayers annually. From Kansas City Plant to Kansas City National Security Campus. 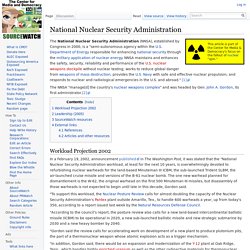 Department of Energy responsible for enhancing national security through the military application of nuclear energy. NNSA maintains and enhances the safety, security, reliability and performance of the U.S. nuclear weapons stockpile without nuclear testing; works to reduce global danger from weapons of mass destruction; provides the U.S. Wikileaks. National Endowment for the Humanities. Sixty years ago Las Vegas was a dusty desert crossroads. 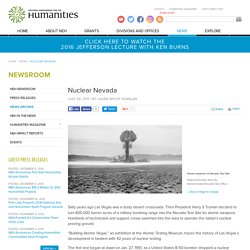 Then President Harry S Truman decided to turn 800,000 barren acres of a military bombing range into the Nevada Test Site for atomic weapons. Hundreds of technicians and support crews swarmed into the area to operate the nation’s nuclear proving ground. “Building Atomic Vegas,” an exhibition at the Atomic Testing Museum, traces the history of Las Vegas’s development in tandem with 42 years of nuclear testing.

The first test began at dawn on Jan. 27, 1951, as a United States B-50 bomber dropped a nuclear warhead from nearly 20,000 feet onto Frenchman Flats in the Nevada desert. The device, codenamed Able, detonated 1060 feet above the desert floor, shaking the earth and echoing through the nearby mountains. “Mushroom clouds could be seen from Vegas,” some forty-five miles away, says Karen Green, curator at the Atomic Testing Museum. The doors to the exhibition open onto a view of a giant mushroom cloud against a dark sky. 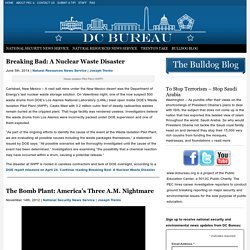 On Valentines night, one of the now suspect 500 waste drums from DOE’s Los Alamos National Laboratory (LANL) blast open inside DOE’s Waste Isolation Pilot Plant (WIPP). Casks filled with 3.2 million cubic feet of deadly radioactive wastes remain buried at the crippled plant. That huge facility was rendered useless. Investigators believe the waste drums from Los Alamos were incorrectly packed under DOE supervision and one of them exploded. “As part of the ongoing efforts to identify the cause of the event at the Waste Isolation Pilot Plant, we are evaluating all possible causes including the waste packages themselves,” a statement issued by DOE says. The disaster at WIPP is rooted in careless contractors and lack of DOE oversight, according to a DOE report released on April 24. (learn more about this documentary) [GOV ACCOUNTABILITY OFFICE] Agency Expanded Use of Some Federal Oversight Reforms, but Is Still Determining Future Plans. What GAO Found Key reforms at the National Nuclear Security Administration's (NNSA) Kansas City Plant (KCP)—a site in Missouri that manufactures electronic and other nonnuclear components of nuclear weapons—included (1) streamlining operating requirements by replacing Department of Energy (DOE) requirements with industry standards, where appropriate; (2) refocusing federal oversight to rely on contractor performance data for lower-risk activities; and (3) establishing clear contractor goals and incentives. 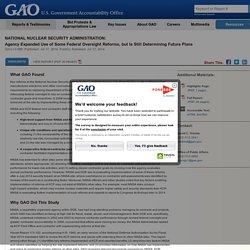 A 2008 review of the reforms reported nearly $14 million in cost reductions were achieved at the site by implementing these reforms. NNSA and KCP federal and contractor staff identified key factors that facilitated implementation of reforms at KCP, including the following: High-level support from NNSA and field office leadership . Gaining and maintaining the support of the NNSA Administrator and buy-in of some KCP Field Office staff for changes from the reforms was critical. BUDGET-2014-APP-1-9. Department of State and Department of Energy's National Nuclear Security Administration to Host "Nuclear Explosion Monitoring: 60 Years of Science and Innovation" The Department of State, in partnership with the Department of Energy’s National Nuclear Security Administration (NNSA), will host “Nuclear Explosion Monitoring: 60 Years of Science and Innovation,” on November 30, 2016, from 1:00 p.m. to 6:30 p.m., in the Dirksen Senate Office Building, Room SD-G50. 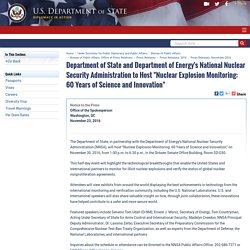 This half-day event will highlight the technological breakthroughs that enable the United States and international partners to monitor for illicit nuclear explosions and verify the status of global nuclear nonproliferation agreements. Attendees will view exhibits from around the world displaying the best achievements in technology from the international monitoring and verification community, including the U.S. National Laboratories. U.S. and international speakers will also share valuable insight on how, through joint collaboration, these innovations have helped contribute to a safer and more secure world.

[Federal Register LINK] National Nuclear Security Administration Documents. We've been hard at work to make the various types of content you are viewing on FederalRegister.gov more clear and to improve the display of our documents. 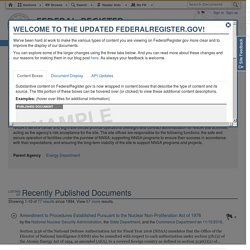 You can explore some of the larger changes using the three tabs below. And you can read more about these changes and our reasons for making them in our blog post here. As always your feedback is welcome. Substantive content on FederalRegister.gov is now wrapped in content boxes that describe the type of content and its source.

The title portion of these boxes can be hovered over (or clicked) to view these additional content descriptions. Examples: (hover over titles for additional information) We've changed the way we display documents to make them easier to read and to make document tools more readily available. National Nuclear Security Administration. National Nuclear Security Administration.