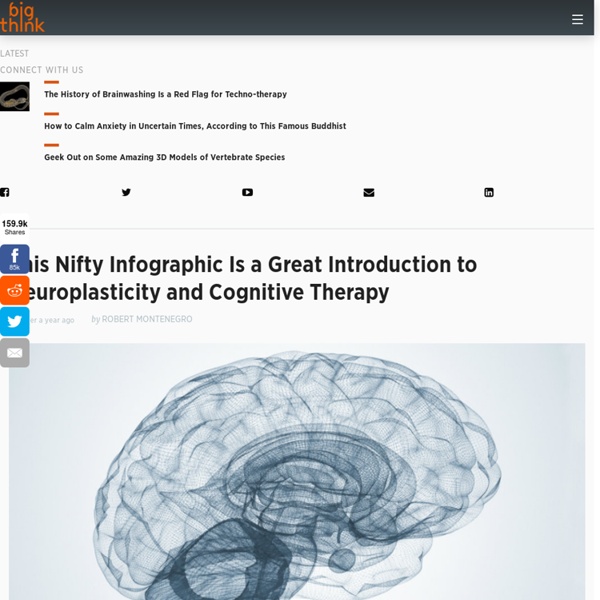 It's startling to think about how we've got a spaceship billions of miles away rendezvousing with Pluto, yet here on Earth there are major aspects of our own anatomy that we're almost completely ignorant about. We've climbed Everest, sent men to the moon, and invented the Internet — but we still don't know how our brains work. The positive outlook is that many health, science, and research specialists believe we're on the precipice of some major neuroscientific breakthroughs. One example of a recent discovery with major implications is our further understanding of neuroplasticity. Simply put, we used to think our brain was what it was — unchangeable, unalterable. We were stuck with what nature gave us. Below, broken up into two parts, is a terrific infographic detailing the essence of what we know about neuroplasticity and how it works. Want a high-res, unedited version of the image above? (h/t @DaniMansfield) Want to learn more about neuroplasticity?

Neurocomic: A Graphic Novel About How the Brain Works by Maria Popova From the caves of memory to the castles of deception, by way of naughty neurotransmitters and giddy ganglia. Scientists are only just beginning to understand how the brain works — from what transpires in it while we sleep to how to optimize its memory to what love does to it to how music affects it — and the rest of us fall somewhere on the spectrum between fascinated and confused when it comes to the intricate inner workings of our master-controller. From British indie press Nobrow — who also brought us Freud’s graphic biography, those lovely illustrated chronicles of the Space Race and aviation, as well as Blexbolex’s magnificent No Man’s Land — comes Neurocomic (public library | IndieBound), a graphic novel about how the brain works. This remarkable collaboration between Dr.

Half of Your Friends Aren’t Actually Your Friend Here’s a fun exercise: Take a minute and count up all your friends. Not just the close ones, or the ones you’ve seen recently — I mean every single person on this Earth that you consider a pal. Got a number in your mind? Good. Repetition compulsion - Wikipedia Repetition compulsion is a psychological phenomenon in which a person repeats a traumatic event or its circumstances over and over again. This includes reenacting the event or putting oneself in situations where the event is likely to happen again. This "re-living" can also take the form of dreams in which memories and feelings of what happened are repeated, and even hallucination. The term can also be used to cover the repetition of behaviour or life patterns more broadly: a "key component in Freud's understanding of mental life, 'repetition compulsion'...describes the pattern whereby people endlessly repeat patterns of behaviour which were difficult or distressing in earlier life.

The problem of Shouganai: What can be done? Shouganai is a widely used phrase in Japan, but the philosophy behind it goes much deeper, embedded at the very core of the society. Erik recently wrote to great extent about this phrase over at his travel journal. I also have come to feel the desire to examine the phenomenon of shouganai. Shouganai (しょうがない) is actually a shortened or slurred way of saying shiyou ga nai. Directly translated, shiyou ga nai means, “there is no way of doing/going.” It is used interchangeably with shikata ga nai, which translates identically. Aphantasia Aphantasia is the suggested name for a condition where one does not possess a functioning mind's eye and cannot visualize imagery.[1] The phenomenon was first described by Francis Galton in 1880,[2] but has remained largely unstudied since. Interest in the phenomenon renewed after the publication of a study conducted by a team led by Prof. Adam Zeman of the University of Exeter,[3] which also coined the term aphantasia.[4] Research on the subject is still scarce, but further studies are planned.[5][6] History[edit]

Twelve Things You Were Not Taught in School About Creative Thinking 2382 516Share Synopsis Aspects of creative thinking that are not usually taught. Diamonds turn nuclear waste into nuclear batteries One problem with dealing with nuclear waste is that it's often hard to tell what's waste and what's a valuable resource. Case in point is the work of physicists and chemists at the University of Bristol, who have found a way to convert thousands of tonnes of seemingly worthless nuclear waste into man-made diamond batteries that can generate a small electric current for longer than the entire history of human civilization. How to dispose of nuclear waste is one of the great technical challenges of the 21st century. The trouble is, it usually turns out not to be so much a question of disposal as long-term storage. If it was simply a matter of getting rid of radioactive material permanently, there are any number of options, but spent nuclear fuel and other waste consists of valuable radioactive isotopes that are needed in industry and medicine, or can be reprocessed to produce more fuel.

How Removing Half of Someone's Brain Can Improve Their Life We may be biased, but we think the human brain is pretty special. All this week, mentalfloss.com is celebrating this miracle organ with a heap of brain[y] stories, lists, and videos. It all leads up to Brain Surgery Live With mental_floss, a two-hour television event that will feature—yes—live brain surgery. The Effects Of Emotional Abuse & How To Heal Them - mindbodygreen Insomnia, appetite changes, constant fear, a sense of doom, and hopelessness: self-destruct mode. This is your body saying "no more." Your patchwork — the above four solutions — aren't working anymore, and your body is going to torture your mind until you surrender to the only permanent solution: love. You should seek professional therapy for anxiety and depression, but I would highly recommend that all emotional abuse survivors approach therapy from the perspective of love rather than constant analysis of your undesirable behaviors. Instead of searching your memories, try feeling your feelings.

5 Things People Don't Get About Borderline Personalities Photodisc/Photodisc/Getty Images Considering movies tend to portray us as violent stalkers (or at the very least, out-of-control whirlwinds of emotional destruction), it's easy to lump BPD sufferers in with sociopaths or other groups that lack basic human empathy. But more recent studies suggest that we actually just have way too much of it. Since you're constantly assessing the emotional state of the people around you (primarily because it's all your fault, and oh god you have to fix it), people with borderline personality disorder kind of have people-reading superpowers. That's bad if it leads you to overreact, like I did at the grocery store, but it can also mean you're the Stephen Hawking of interpersonal relations.

Swipe Right for Prom: how teens are using Tinder On a Sunday night sleepover last Christmas, 16-year-old Hannah from Los Altos Hills, California, signed up for Tinder for the first time. It started off as an inside joke between three slumber party attendees, like how teenage girls in the 1990s dared each other to call boys and to discreetly put their conversations on speakerphone. Hannah and her friends spent the rest of the night rolling around the bed, collectively swiping left or right on the iPhone app.

Important Link between the Brain and Immune System Found When the ancient Egyptians prepared a mummy they would scoop out the brain through the nostrils and throw it away. While other organs were preserved and entombed, the brain was considered separately from the rest of the body, and unnecessary for life or afterlife. Eventually, of course, healers and scientists realized that the three pounds of entangled neurons beneath our crania serve some rather critical functions. Yet even now the brain is often viewed as somewhat divorced from the rest of the body; a neurobiological Oz crewing our bodies and minds from behind the scenes with unique biology and unique pathologies. Perhaps the most commonly cited division between body and brain concerns the immune system. A Short Dictionary of Psychoanalysis Views: 3466 All subjects have their specialised vocabularies; a set of words that initially sound unusual, even a touch frightening, but that can also prove oddly beautiful and beguiling. To their enemies, key words are mere jargon, but jargon has its advantages: it allows us swiftly to get a firm hold of ideas that might otherwise have been confusing and cumbersome. They also provide touching evidence of the existence of a group of people who have come together to agree on the meaning of some dauntingly fiddly things. Psychoanalysis has been very fruitful at generating a vocabulary.

Related:
Related:  Nuerobiology   -  Psycho   -  Mental Health   -  Matthieu Ricard: The habits of happiness | Video on TED.com   -  Revenge of the Introvert   -  How To Treat Others: 5 Lessons From an Unknown Author - Global One TV: Multimedia for Mystics   -  Health research : mood and intellectual performance   -  Emotions Are A Resource, Not A Crutch   -  Buddhism and the Brain § SEEDMAGAZINE.COM   -  » Blog Archive » 50 Ways to Be More Humble and to Act Humbly   -  CureTogether Blog » Blog Archive » 23 Surprisingly Effective Treatments for Depression (One Year Later)   -  A Little Meditation Goes a Long Way | Greater Good   -  Antidepressants in Bipolar Disorder   -  Login - FetLife   -  Touch the Sky: 7 Psychoactive Substances to Expand Your Mind | Matador Network   -  The 7 Chakras for Beginners - mindbodygreen   -  Positively Positive   -  The Secret to Not Caring What People Think   -  How to Motivate Yourself: 14 Easy Ways | Inc.com   -  Thyroid, Depression and Mental Health - Stop The Thyroid Madness   -  Welcome to GoCognitive | GoCognitive   -  Encyclopedia of Mental Disorders   -  Myrko Thum's Personal Development Blog   -  Boost Your Brain Power: A Simple Exercise | Inc.com   -  Assertiveness Skills - Counseling Center (NDSU)   -  Magnesium for Depression: A Cure for Depression using Magnesium?   -  Post-Traumatic Stress Disorder   -  Mindfulness Exercises - Mindfulness Techniques That Work   -  10 Reasons Why Oxytocin Is The Most Amazing Molecule In The World   -  Stress (biology) - Wikipedia, the free encyclopedia   -  How To Get Rid of Negative Thoughts - PsyBlog   -  Psychology 102: Educational Psychology Course - Online Video Lessons | Education Portal   -  Happy Thoughts: Here are the things proven to make you happier:   -  MoodGYM Training Program   -  Rosenhan experiment   -  The Best of Socially Awkward Penguin   -  Depression Test - Am I depressed | Moodscope   -  Abusive parents: What do grown children owe the mothers and fathers who made their childhood a living hell?   -  The Future of Self-Improvement, Part I: Grit Is More Important Than Talent - 99U   -  Rosalind Robertson (the DIY Couturier) (21 Tips to Keep Your Shit Together When You're...)   -  Depression Part Two