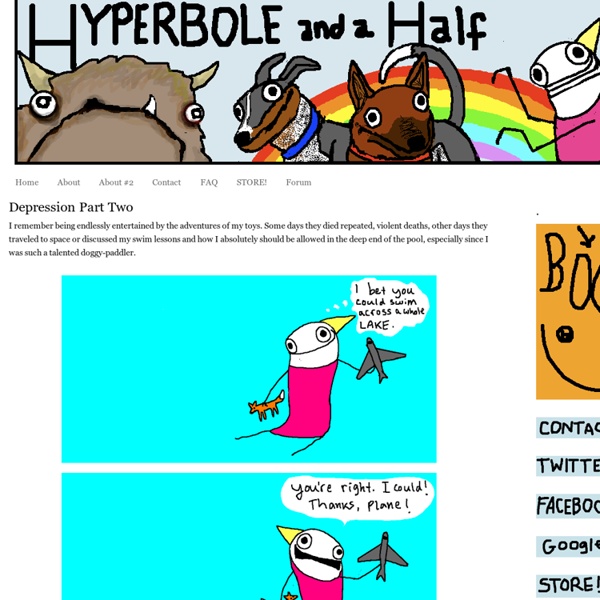 I remember being endlessly entertained by the adventures of my toys. Some days they died repeated, violent deaths, other days they traveled to space or discussed my swim lessons and how I absolutely should be allowed in the deep end of the pool, especially since I was such a talented doggy-paddler. I didn't understand why it was fun for me, it just was. But as I grew older, it became harder and harder to access that expansive imaginary space that made my toys fun. I remember looking at them and feeling sort of frustrated and confused that things weren't the same. I played out all the same story lines that had been fun before, but the meaning had disappeared. Depression feels almost exactly like that, except about everything. At first, though, the invulnerability that accompanied the detachment was exhilarating. The beginning of my depression had been nothing but feelings, so the emotional deadening that followed was a welcome relief. Which leads to horrible, soul-decaying boredom.

How To Get Through Damn Near Anything Apr 18, 2010 Ever have one of those tough-as-hell weeks where it feels like the world is unloading both barrels at you – where things fly at you at such an vicious, unrelenting speed that you feel like life is pushing your limits simply to see where your breaking point is? Where the pressure is on, the sleep is never restful, and you find yourself bubbling up with frustration about your job, your endurance, your attitude … and it seems like at any moment that life is about to break you? I recently had a week of exactly that. It was curious. And by “curious” I mean fricking hell. Carbon-dioxide levels are at their highest point in at least 800,000 years Since 1956, the Mauna Loa Observatory in Hawaii has been gathering data on how much carbon dioxide is in the atmosphere — a very basic measure of how humans are transforming the planet and setting the stage for future climate change. The so-called Keeling Curve is attracting even more attention than usual this month, as the amount of carbon in the atmosphere is on the verge of hitting 400 parts per million, a new milestone (the readings hit 399.71 on Tuesday): Notice that the curve is jagged. As humans keep burning fossil fuels, the amount of carbon dioxide in the atmosphere has trended upward over time. But there are still seasonal fluctuations.

Dreaming And Depression by Maria Popova “Memory is never a precise duplicate of the original… it is a continuing act of creation. Dream images are the product of that creation.” For the past half-century, sleep researcher Rosalind D. Cartwright has produced some of the most compelling and influential work in the field, enlisting modern science in revising and expanding the theories of Jung and Freud about the role of sleep and dreams in our lives. In The Twenty-four Hour Mind: The Role of Sleep and Dreaming in Our Emotional Lives (public library), Cartwright offers an absorbing history of sleep research, at once revealing how far we’ve come in understanding this vital third of our lives and how much still remains outside our grasp.

Ontology Study of the nature of being, becoming, existence or reality, as well as the basic categories of being and their relations Parmenides was among the first to propose an ontological characterization of the fundamental nature of reality. Etymology[edit] While the etymology is Greek, the oldest extant record of the word itself, the New Latin form ontologia, appeared in 1606 in the work Ogdoas Scholastica by Jacob Lorhard (Lorhardus) and in 1613 in the Lexicon philosophicum by Rudolf Göckel (Goclenius). The first occurrence in English of ontology as recorded by the OED (Oxford English Dictionary, online edition, 2008) came in a work by Gideon Harvey (1636/7–1702): Archelogia philosophica nova; or, New principles of Philosophy. Leibniz is the only one of the great philosophers of the 17th century to have used the term ontology.[6]

How to Be Assertive (Without Losing Yourself) Your very lucky your knew who you wanted to be in high school. I'm 27 and I still dont know who/what I want to be. Thanks. I'm your age, actually. It wasn't so much deciding what I wanted to be, but who I wanted to be. I wanted to be the guy people could count on, but also be someone who fought for what he wanted (having been trampled on a lot as an awkward kid).

List of threatened sharks Binding legislation and harvest management strategies... are urgently needed to address the disproportionate impact of fisheries on cartilaginous fishes. Threatened sharks are those vulnerable to endangerment (extinction) in the near future. The International Union for Conservation of Nature (IUCN) is the world’s oldest global environmental organization.[2] It evaluates threatened species, and treats threatened species not as a single category, but as a group of three categories, depending on the degree to which they are threatened:[3] Vulnerable species

Philosophy of mind A phrenological mapping[1] of the brain – phrenology was among the first attempts to correlate mental functions with specific parts of the brain Philosophy of mind is a branch of philosophy that studies the nature of the mind, mental events, mental functions, mental properties, consciousness, and their relationship to the physical body, particularly the brain. The mind–body problem, i.e. the relationship of the mind to the body, is commonly seen as one key issue in philosophy of mind, although there are other issues concerning the nature of the mind that do not involve its relation to the physical body, such as how consciousness is possible and the nature of particular mental states.[2][3][4] Mind–body problem[edit] Our perceptual experiences depend on stimuli that arrive at our various sensory organs from the external world, and these stimuli cause changes in our mental states, ultimately causing us to feel a sensation, which may be pleasant or unpleasant.

waldosia - The Dictionary of Obscure Sorrows The Dictionary of Obscure Sorrows is a compendium of invented words written by John Koenig. Each original definition aims to fill a hole in the language—to give a name to emotions we all might experience but don’t yet have a word for. The author's mission is to capture the aches, demons, vibes, joys and urges that roam the wilderness of the psychological interior. Each sorrow is bagged, tagged and tranquilized, then released gently back into the subconscious. Einstein was right - honey bee collapse threatens global food security The agri-business lender Rabobank said the numbers of US bee colonies failing to survive each winter has risen to 30pc to 35pc from an historical norm of 10pc. The rate is 20pc or higher in much of Europe, and the same pattern is emerging in Latin America and Asia. Albert Einstein, who liked to make bold claims (often wrong), famously said that "if the bee disappeared off the surface of the globe, man would have only four years to live". Such "apocalyptic scenarios" are overblown, said Rabobank. The staples of corn, wheat, and rice are all pollinated by wind. However, animal pollination is essential for nuts, melons and berries, and plays varying roles in citrus fruits, apples, onions, broccoli, cabbage, sprouts, courgettes, peppers, aubergines, avocados, cucumbers, coconuts, tomatoes and broad beans, as well as coffee and cocoa.

Lucid Dreaming/Induction Techniques This page describes a number of lucid dream induction techniques. It is recommended that you be able to recall at least one dream per night in order to maximize the effectiveness of these methods. Preliminary Knowledge[edit]