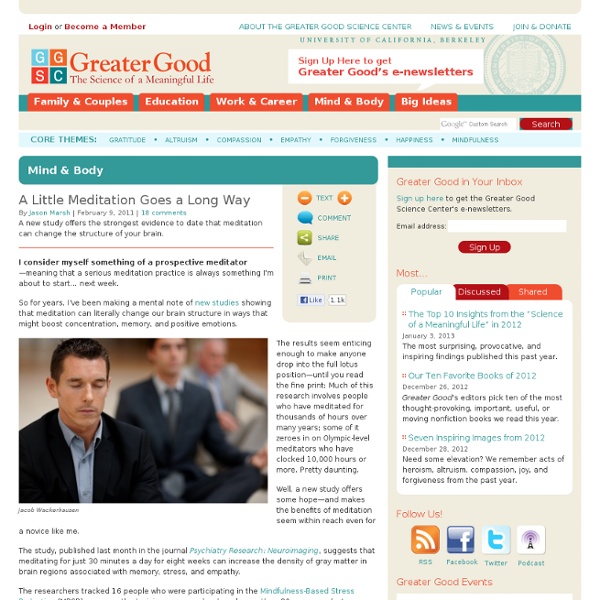 I consider myself something of a prospective meditator—meaning that a serious meditation practice is always something I’m about to start… next week. So for years, I’ve been making a mental note of new studies showing that meditation can literally change our brain structure in ways that might boost concentration, memory, and positive emotions. Jacob Wackerhausen The results seem enticing enough to make anyone drop into the full lotus position—until you read the fine print: Much of this research involves people who have meditated for thousands of hours over many years; some of it zeroes in on Olympic-level meditators who have clocked 10,000 hours or more. Pretty daunting. Well, a new study offers some hope—and makes the benefits of meditation seem within reach even for a novice like me. The researchers tracked 16 people who were participating in the Mindfulness-Based Stress Reduction (MBSR) program, the training program developed more than 30 years ago by Jon Kabat-Zinn.

» Decluttering as Zen Meditation Post written by Leo Babauta. Decluttering your home or workspace can often seem overwhelming, but in truth it can be as peaceful as meditation, and can be a way to practice living mindfully and in the moment. Decluttering can be your zazen, as it is often mine. Recently I was honored with the chance to speak to a class at the San Francisco Zen Center, with the wonderful Zen priest Susan O’Connell (one of my favorite people in the world, and my favorite movie star friend). I talked with the Zen students about decluttering, and a couple things stood out for me as I talked: Clutter is a manifestation of a) holding onto the past and b) fear of what might happen in the future.Letting go of clutter is a way to live more mindfully and in the present.The act of decluttering itself can be a mindfulness practice. Let’s talk about each of those things briefly. Clutter is holding onto the past, or fear of the future Why do we have clutter in the first place? 1. 2. Let go of clutter to live mindfully

MIT Student Develops $3 Cutting-Edge Healing Device, Field Tested in Haiti No one really knows why, but for an open wound, simply applying suction dramatically speeds healing times. (The theory is that the negative pressure draws bacteria out, and encourages circulation.) But for almost everyone, that treatment is out of reach--simply because the systems are expensive--rentals cost at least $100 a day and need to be recharged every six hours. No more. Danielle Zurovcik, a doctoral student at MIT, has created a hand-powered suction-healing system that costs about $3. The device is composed of an airtight wound dressing, connected by a plastic tube to a cylinder with accordion-like folds. Zurovcik originally intended to field-test the device in Rwanda, but then the Haiti Earthquake struck. Currently, Zurovcik is verifying the healing benefits of the device, and developing a new model that can be readily carried and concealed. [Top image: Melanie Gonick/MIT; Bottom image: Patrick Gillooly/MIT]

Positive Psychology Exercise - Emoclear Self-Helpapedia Emoclear Positve Psychology Exercise I: Doing Pleasurable, Important, and Meaningful Activities Every day for two weeks do the following: 1. Emoclear Positive Psychology Exercise II: Building Character. Based on Character Strengths (Peterson & Seligman, 2004). For two weeks pick two activities per day from the list below. The Activity List: 1. Here's a reflection exercise for accessing appreciation and gratitude: This exercise is to be done daily for two weeks. 1. Have fun, Steve How to Meditate - Guided Meditation Techniques - Buddhist Meditations How to Meditate: What you didn’t know about Empty Mind Techniques and your bliss Sow a thought and you reap an act; Sow an act and you reap a habit; Sow a habit and you reap a character; Sow a character and you reap a destiny. Empty mind meditation is one of the most popular and yet misunderstood types of meditation. I love it because it trains you to still (or control, depending on what you want) your thoughts and emotions. Empty mind meditation is also a neutral form – it is free of all the different teachings and belief systems, so everyone can practice it without getting sucked into something they might not want to. I’ve been asked a few times about my favourite meditations, so I’ll describe it here, with a few personal variations. If you’re an experienced meditator, you can skip the next few sections and get straight to the goods. Benefits of empty mind meditation I have used empty mind meditation to great effect; it was one of the most important practices I used to get out of extreme negativity. Continued practice of meditation: When and where Posture Frustration.

Simple Productivity | Zen Habits Driving High on Marijuana Not an Impairment, Study Says | Medical Marijuana News | CannaCentral August 17, 2010 by Aaron Turpen Despite what the nation’s “Drug Czar” Gil Kerlikowske might say and what his office might promote, it’s being proven that driving under the influence of marijuana does not make you a dangerous driver. In fact, a new study shows that it makes virtually no difference in the driving abilities of most drivers. Of course, that may not be saying much given the state of some highways in this nation, but at least the road hogs and blind spot lurkers don’t drive any worse while high. Most of the studies for stoned and drunk driving were conducted in the 1970s. The research is legitimate, double-blind, placebo-controlled and used 85 subjects (50 men, 35 women) on driving simulators. The only measurable difference in driving between those who were sober when stoned was that they tended to slow down and drive slower than otherwise. Other studies conducted overseas, including one in Israel published in 2008,2 showed similar results.

Audio: Meditation Guided Meditations with Malcolm Huxter Body Scan gives instructions on bringing awareness to bodily sensations. For the most part this exercise is relaxing. Occasionally practitioners initially feel uncomfortable with this exercise. If it becomes overwhelmingly distressing, merely distract or direct attention to something outside your body until you are more comfortable with the exercise at another time. Progressive Relaxation gives guidance for a common muscle tension and release exercise often used for stress management. Calming the body with the breath, describes a mindfulness of breath exercise coupled with relaxation. Cultivating peace and joy with the breath, is an extension of the track "Calming the body with the breath". Mindful Standing and Walking, provides simple instructions for mindful standing and walking. Mindfulness of Breath gives instructions for mindfulness of breath, as is it experienced as movement in the abdomen. Open awareness. A guided Loving kindness meditation.

Zentips Dichloroacetic acid Although preliminary studies have shown DCA can slow the growth of certain tumors in animal studies and in vitro studies, there is currently insufficient evidence to support the use of DCA for cancer treatment.[3] Chemistry and occurrence[edit] The chemistry of dichloroacetic acid is typical for halogenated organic acids. It is a member of the chloroacetic acids family. The dichloroacetate ion is produced when the acid is mixed with water. DCA has been shown to occur in nature in at least one seaweed, Asparagopsis taxiformis.[5] It is a trace product of the chlorination of drinking water and is produced by the metabolism of various chlorine-containing drugs or chemicals.[6] DCA is typically prepared by the reduction of trichloroacetic acid (TCA). Therapeutic uses[edit] Topical chemoablation[edit] Both DCA and TCA are used for cosmetic treatments (such as chemical peels and tattoo removal) and as topical medication for the chemoablation of warts, including genital warts. Cancer[edit]