Asia's Global Influence: How Is It Exercised? What Does It Mean? A report from the 2010 Asia Policy Assembly As we enter the second decade of the 21st century, the international landscape reflects the global influence of an empowered and developing Asia-Pacific. 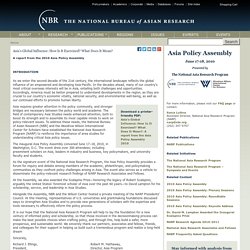 Governing for the Future: How to Bring the Long-Term Into Short-Term Political Focus. THE GLOBAL FUTURE OF SOCIAL POLICY final.pdf. Acharya-Can Asia Lead.pdf. Globalization with Few Discontents? Pew Research Center June 3, 2003 For more than a decade, globalization has been a deeply divisive topic among social activists, intellectuals, business leaders, policy makers and politicians. 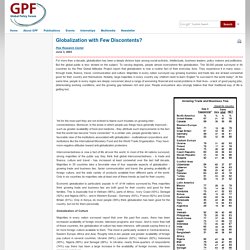 But the global public is less divided on the subject. Economy and Culture : Looking for Public Regulation Issues. PlanetagoraJuly 2003 What is at stake in culture cannot be merely reduced to identity expressions (national, geographical, religious, communities). 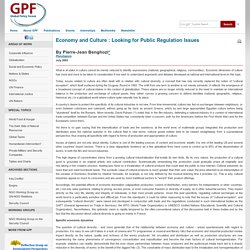 Economic dimension of culture has more and more to be taken in consideration if one wish to understand arguments and debates developed at national and international level on this topic. Today, issues related to culture are often dealt with in relation with cultural diversity, a concept that has only recently replaced the notion of "cultural exception", which itself surfaced during the Uruguay Round in 1993. The shift from one term to another is not merely semantic. Converting the Masses: Starbucks in China. Far Eastern Economic Review July 17, 2003 How's this for people-watching? 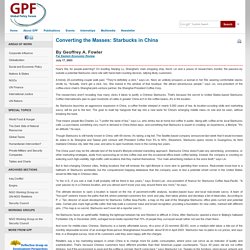 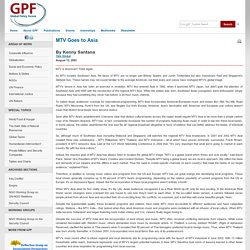 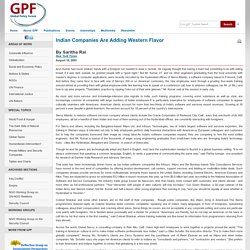 War of Words. GuardianSeptember 9, 2003 The use of English terms by German speakers is of increasing concern to linguistic purists in Europe's biggest country, writes Ben Aris. 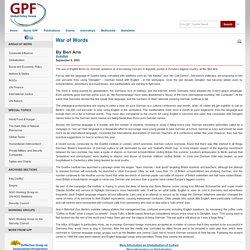 Fed up with the language of Goethe being corrupted with additions such as "die Kiddies" and "der Call Centre", Germany's politicians are proposing to ban civil servants from using "Denglish" - German mixed with English - in the workplace. Is France Ready for Starbucks? Associated PressSeptember 26, 2003. 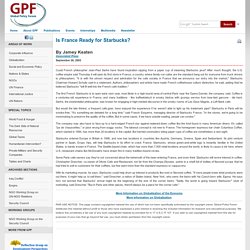 Localizing Cultures. Korea HeraldJanuary 13, 2004 Although the word globalization suggests a comprehensive and self-evident process, it is an incomplete term. 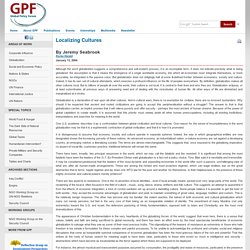 It does not indicate precisely what is being globalized: the assumption is that it means the emergence of a single worldwide economy, into which all economies must integrate themselves, or more accurately, be integrated in the passive voice. But globalization does not obligingly halt at some ill-defined frontier between economics, society and culture. Indeed, it has its own set of cultural attendants, which exercise a profound influence on the life of peoples everywhere. By definition, globalization makes all other cultures local. Globalization is a declaration of war upon all other cultures. One U.S. academic describes it as a confrontation between global civilization and local cultures. In 2,000 Years, Will the World.

Christian Science MonitorJanuary 15, 2004 Down in the mall, between the fast-food joint and the bagel shop, a group of young people huddles in a flurry of baggy combat pants, skateboards, and slang. 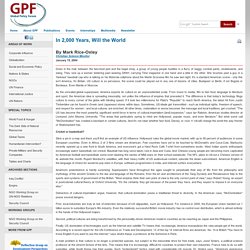 All Cultures Are Not Equal. New York TimesAugust 10, 2005 Let's say you are an 18-year-old kid with a really big brain. You're trying to figure out which field of study you should devote your life to, so you can understand the forces that will be shaping history for decades to come. Go into the field that barely exists: cultural geography. Study why and how people cluster, why certain national traits endure over centuries, why certain cultures embrace technology and economic growth and others resist them.

UN Body Endorses Cultural Protection. Washington PostOctober 21, 2005 In a vote cast as a battle of global conformity vs. cultural diversity, delegates to a U.N. agency turned aside strong U.S. objections Thursday and overwhelmingly approved the first international treaty designed to protect movies, music and other cultural treasures from foreign competition. The 148 to 2 vote at the U.N. Manifold Ways That Societies Express Themselves. Le Monde DiplomatiqueNovember 2005 A large majority of countries last month approved a Unesco motion that seeks to counter the commercial treatment of cultural goods as promoted by the World Trade Organisation. Now the motion must be ratified by at least 30 countries - and implemented.

A convention on the protection of the diversity of cultural contents and artistic expressions was approved by member states at the Unesco general conference last month. It intends to provide a legal framework for the universal declaration on cultural diversity, unanimously adopted soon after 11 September 2001. From Cultural Revolution. Inter Press ServiceJuly 28, 2006 While the world is getting used to China's ballooning global trade surplus, Chinese mandarins fret over the one area that the country has been posting a continuous deficit in -- culture. China may be now the world's fourth largest economy, wielding increasing influence in everything from global trade talks to currency rates but it lacks the success stories of "Harry Potter" and "The Da Vinci Code", which would transform it into a cultural heavyweight producing works of universal appeal. Across Latin America, Mandarin Is in the Air. Washington PostSeptember 22, 2006 Elizabeth Zamora is a busy mother and executive.

Still, for three hours every Saturday, she slides into a battered wooden desk at Bogota's National University and follows along as Yuan Juhua, a language instructor sent here by China's government, teaches the intricacies of Mandarin. Zamora already speaks German and English, but she struggles to learn written Chinese characters and mimic tones unknown in Spanish. Dumpling.pdf. India Attracts Universities from the US. New York TimesMarch 26, 2007 It was an unusual university entrance interview.

Cross-Cultural Leadership: How Will China Influence The World? Cultall.pdf. The Useless Tree: On Global Cultural Influence in Modern/Post-Modern Times. The Buddhist World: Spread of Buddhism to the West. The Influence of Buddhism. Chinese Culture Broadens Its World Influence. China's culture once influenced the world, and it can again - People's Daily Online. Confucius’ impact on Chinese society. How Korean culture stormed the world. Influence Of Asian Culture (India, China, Japan, Pak Etc.) On The West.