Explicit cookie consent. The Asia Market for Self-paced eLearning Products and Services: 2011-2016 Forecast and Analysis - AmbientInsight-2011-2016-Asia-SelfPaced-eLearning-Market-Abstract.pdf. How to win at leapfrog. There’s a general tendency in life to want to do what others have done. 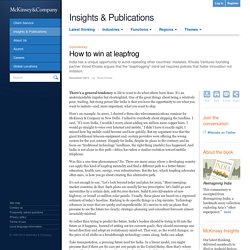 It’s an understandable impulse but shortsighted. One of the great things about being a relatively poor, trailing, but rising power like India is that you have the opportunity to see what you want to imitate—and, more important, what you want to skip. Here’s an example. In 2000, I chaired a three-day telecommunications seminar for McKinsey & Company in New Delhi. I talked to everybody about skipping the landline. Was this a one-time phenomenon? It’s not enough to say, “Let’s look beyond today and plan for 2025.” So rather than trying to predict the future, India’s leaders should be trying to fit into the future as it happens. Take transportation, a pressing future need for India. The first implication is that we’ll need a different type of transportation infrastructure.

Such a distributed system would be much more adaptive than making a massive investment in a new electric rail network. About the author. Reading in the mobile era: a study of mobile reading in developing countries; 2014 - 227436e.pdf. PPT-Plenary2_Cheng_Xiandong__Chinese_.pdf. Laos education gets boost from Village Science project - SciDev.Net South-East Asia & Pacific. Many people around the world take for granted the availability of educational tools and materials online and that quality educational resources can be found with just a few clicks of the mouse. 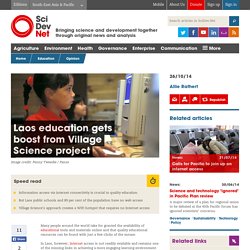 In Laos, however, Internet access is not readily available and remains one of the missing links in achieving a more engaging learning environment that fosters creativity and exploration. In the past ten years, the country has made substantial gains in expanding access to education. The net enrolment ratio for primary education increased from 63 per cent in 1990 to about 92 per cent in school year 2008-2009. Gender differences are also decreasing. The government's vision on education highlights the need to increase female participation in all aspects of society and the economy. [1] However, substantial reforms of the educational system are still needed to bring positive social and economic changes. 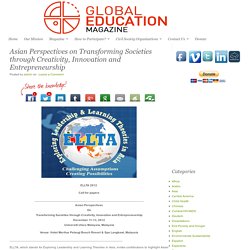 Given the enormity and diversity of challenges facing the world at large, and Asia, in particular, the transformation of societies requires creative and innovative responses, and individual and collective entrepreneurship. ‘Creativity, Innovation, and Entrepreneurship’- as expressions and embodiments of Leadership and Learning – are, thus, the key catalysts for social transformations in the contemporary Knowledge Era. Laos education gets boost from Village Science project - SciDev.Net South-East Asia & Pacific. East Asia & Pacific - Higher Education in East Asia - Innovation. New Technologies Lead to New Opportunities in Higher Education Innovation and technological capacity is fundamental to diversifying and upgrading product lines, but this capacity is still under-developed in much of East Asia. 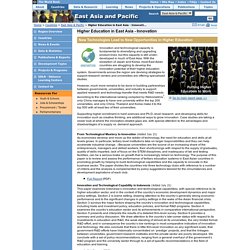 With the exception of Japan and Korea, most East Asian countries are struggling to develop the innovation potential of their higher education system. Governments across the region are devising strategies to support research centers and universities are offering specialized studies. However, much more remains to be done in building partnerships between governments, universities, and industry to support applied research and technology transfer that meets R&D needs. According to the international ranking compiled by Webometrics1, only China manages to have one university within the top 200 universities, and only China, Thailand and Korea make it to the top 500 with at least two of their universities. MOOCs and ODL in Higher Education in Asia-Pacific. © Flickr/@matylda A closer look at higher education in Asia and the Pacific reveals that more and more people are becoming aware of the importance of attending university and getting at least an undergraduate degree, which increases the chances of getting employed. 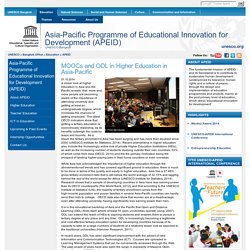 The latest OECD indicators show that getting a tertiary education is economically rewarding, as its benefits outweigh the costs by leaps and bounds. As a result, the tertiary enrolment in Asia has been surging and has more than doubled since 2000 (UNESCO Institute for Statistics, 2014). Recent phenomena in higher education also include the increasingly active role of private Higher Education Institutions (HEIs), as well as the increasing number of students studying outside their own countries, 53% of which come from Asia (OECD, 2014) and the the primary motivation being the prospect of landing higher-paying jobs in their home countries or even overseas. References: Hanover Research. (2011).