EVERYONE READ ME! Important! Walter Tull. Walter Tull, the son of Daniel Tull, was born at 57 Walton Road, Folkestone, on 28th April 1888. 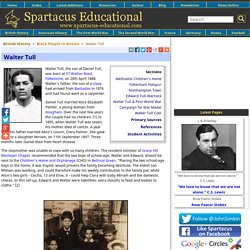 Walter's father, the son of a slave, had arrived from Barbados in 1876 and had found work as a carpenter. Daniel Tull married Alice Elizabeth Palmer, a young woman from Hougham. Over the next few years the couple had six children. (1) In 1895, when Walter Tull was seven, his mother died of cancer. A year later his father married Alice's cousin, Clara Palmer. She gave birth to a daughter Miriam, on 11th September 1897. The stepmother was unable to cope with so many children. Ira Aldridge (1807 – 1867) Famous 19th century black Shakespearean actor. He is the only actor of African-American descent among the 33 actors of the English stage honored with bronze plaques at the Shakespeare Memorial Theatre at Stratford-upon-Avon. 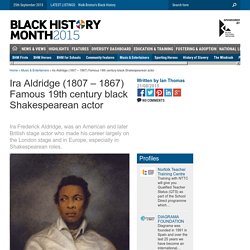 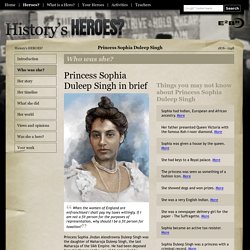 More Her father came from the Punjab in India and her mother the daughter of a German father and Abyssinian mother. Her mother had grown up in Cairo and spoke at first only Arabic Her father presented Queen Victoria with the famous Koh-i-noor diamond. The young deposed Maharaja Duleep Singh was sent to England at the age of 12. Maharaja Dalip Singh. I1843 after the violent upheavals in the Punjab caused by the death of Ranjit Singh, his only remaining son, the seven-year-old Dalip Singh, became Maharaja. 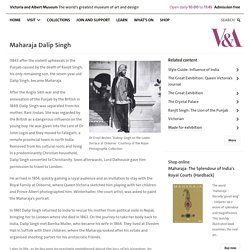 After the Anglo-Sikh war and the annexation of the Punjab by the British in 1849, Dalip Singh was separated from his mother, Rani Jindan. She was regarded by the British as a dangerous influence on the young boy. He was given into the care of Dr John Login and they moved to Fategarh, a remote provincial town in north India. Removed from his cultural roots and living in a predominantly Christian household, Dalip Singh converted to Christianity. Soon afterwards, Lord Dalhousie gave him permission to travel to London. He arrived in 1854, quickly gaining a royal audience and an invitation to stay with the Royal Family at Osborne, where Queen Victoria sketched him playing with her children and Prince Albert photographed him. John Kent – the First Black Police Officer - 1837. However PC John Kent beat his record, as the son of a Caribbean slave who joined the police force in 1837. 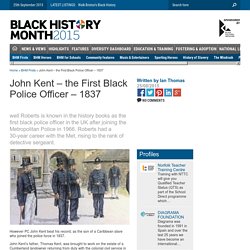 John Kent’s father, Thomas Kent, was brought to work on the estate of a Cumberland landowner returning from duty with the colonial civil service in the West Indies. His son was PC John Kent, who worked in Carlisle from 1837. The surname Thomas adopted was in recognition of the county where he landed late in the 18th century. John was born near Carlisle around 1795. A black figure was a rare sight in that corner of north-west England at the time and even before he joined the police Mr Kent would attract crowds as he worked laying pavements for the city corporation.

Sislin Fay Allen Britain’s First Black Policewoman. Sislin Fay Allen was an inspiration for many when she became the Metropolitan Police’s first black female police officer, based at Croydon in the late 1960s. 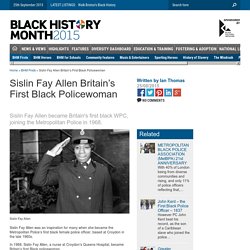 In 1968, Sislin Fay Allen, a nurse at Croydon’s Queens Hospital, became Britain’s first Black policewoman. Sislin Fay Allen was flicking through a newspaper in 1968 when she saw an advert for male and female police officers to which she replied. At the time there were no black female officers so the mum-of-two sat down and wrote an application. Within a few weeks Sislin had made it to the interview stage, shocking her husband and family when she was accepted. Sislin Fay Allen. James Peters the 1st black Rugby Player. James Peters (August 1879 – 26 March 1954) was an English rugby union player and, later, a rugby league player. 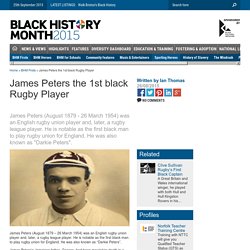 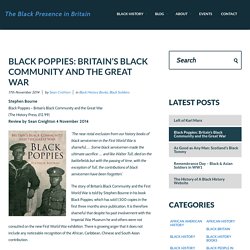 The Missing Tudors: black people in 16th-century England. When we think of Tudor England, we don’t immediately imagine black Africans being part of that society. 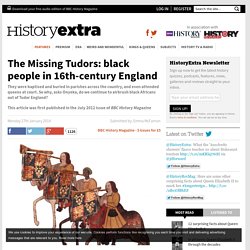 Yet there were Africans here at that time, and they were considered numerous enough in Tudor towns and cities to inspire the phrases “to manie” and “great numbers” in two letters signed by Elizabeth I in July 1596. Both letters sought to have groups of these Africans treated as slaves and exchanged for white English prisoners held captive in Spain and Portugal. Yet it appears that the letters’ authors – an English merchant Thomas Sherley, Sherley’s son of the same name, and a Dutch slave-trader from Lubeck in Germany called Casper Van Senden – were to meet with disappointment. They failed, in their own words “to get any” of the Africans – perhaps because Robert Cecil, the most influential man in Elizabeth’s court, did not like a “commission of that nature”.

Piracy and adventure Other Africans buried in England include “Anthony John, a Neyger” on 18 March 1587. Going missing. Ken Johnson - Black British Swing Music in the 1930s. To jazz followers, however, it meant the arrival of Jamaican alto saxophonist, Joe Harriott and other modern musicians who rode the wave of emigration to find professional opportunities in England. 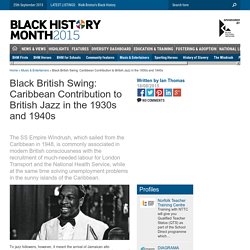