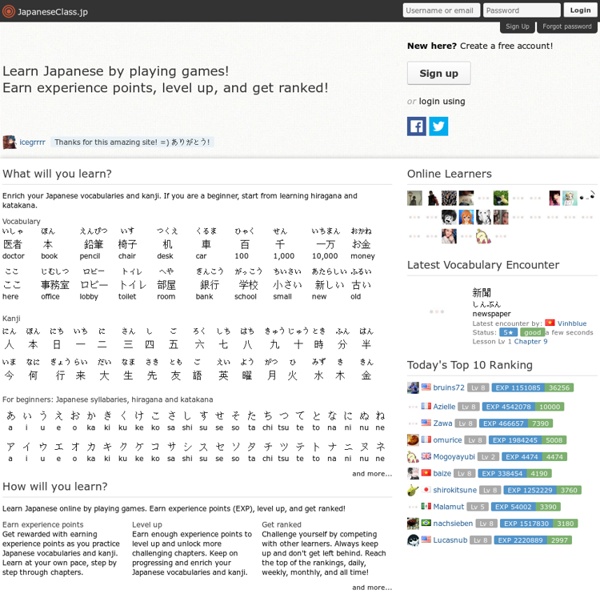 Japanese Lessons with Maggie Beintoo.com Japanese blog | LinguaLift College is a blast for Japanese kids. After all of the time spent studying for entrance exams, they get to cut loose, party, hang out with friends, and occasionally attend class. But in the last year and a half of school, it's time to get down to brass tacks. — Read the full story While writing came to Japan from China and Chinese characters are used in Japanese, there are native Japanese characters called Kokuji (国字). — Read the full story Tsutomu Yamaguchi was a man that held a unique place in history - he survived two atomic bombings. — Read the full story There's a new foodie craze in Japan that celebrates the regional downhome cooking you find in kitchens across the country - B-grade gourmet. — Read the full story If you want to experience something out of the ordinary, give owl cafes in Japan a try. — Read the full story The beautiful, almost meditative video ‘January in Japan’ created quite a lot of buzz when it received the well deserved Staff Pick badge at Vimeo earlier this month.

Machine Assisted Visual Novel Reading [Copied and Updated] [v2.1] » Oyatsu Fansubs Well, this is not related to anime, but is about helping people with basic Japanese knowledge read Visual Novels and understand hopefully most of it. I originally learned this technique from this awesome article, and many thanks to the author Blitzwing for writing such a great article. However, at the time of writing this, the site isn’t in such a great shape, so I thought of writing this here. It’s basically based on the original article with a few updates and modifications. Hence the [Copied and Updated] part. NOTE: If you would like to see the original article, a saved version is here . So, many of us have used, and use ATLAS and/or SYSTRAN 6 with ITH/AGTH to extract text from the Visual Novels (referred to as VNs from hereon), and get a machine-translated, half-Engrish version of the text displayed within the VN. Please note that this requires that you have some very basic knowledge of Japanese, especially its sentence structure. Software we’ll need: So, let’s get started. Screenshots:

Teemo App Turns Exercising Into A Travel Game Runkeeper and Nike+ are fantastic tools for people who are already exercising as a habit, but how do you get someone who’s inactive off the couch for the first time--how do you make exercising appealing to the undecideds, so to speak? Teemo is a new, free iPhone app by Bonnier R&D and Ammunition that takes short interval exercises and places them in the context of worldwide adventure. It’s designed, not for the athlete or the would-be athelete, but for the masses of the rest of us. “We know there is a large portion of the population that wants to feel fit, but they are stuck in a stressful holding pattern,” Ammunition’s Matt Rolandson tells Co.Design. “Imagine people who keep meaning to join a gym, but don’t. Or people who actually have joined a gym, but never go (the stock and trade of the gym industry.)” Teemo makes the baby steps into exercise easy. “As far as verification goes, a user could cheat,” admits Rolandson. Download it here. [Image: RexRover/Shutterstock]

The Best Sites for Learning Japanese - Nihongo Shark - Japanese Lessons Through years of studying, I’ve come across a lot of truly amazing resources for learning Japanese. If you know of any that I’ve missed, please let me know in the comments section, and I’ll add them to this page! Our Favorite Tools for Learning Japanese This list is ever-changing as we find new and awesome things that deserve to appear on it. Anki: Smart flashcards are the most powerful language learning tool in existence. Learning Japanese Lessons JapanesePod101.com: Hands down my favorite source for lessons. Tools, Books & Other Stuff from Japan White Rabbit Japan: Typically where I buy all of my Japanese study books, especially ones I can’t get in the US.Amazon.com: Cheaper when buying books published in the US.Amazon.co.jp: All in Japanese, but they do ship internationally. Kanji Studies Reviewing the Kanji: I firmly believe that RTK, combined with this site, is the fastest way to learn the kanji. Listening Practice Living, Working & Studying in Japan Jobs Job Posting Sites Eikaiwa Housing Visas

To improve listening 5 Apps That Reward You Just for Using Them It turns out you can be rewarded for watching television, going shopping or buying music from the iTunes store. In fact, you can collect points with the punch of a button on your iPhone or Android smartphone and redeem those points for gift cards, discounts, and gadgets like tablets. How's this possible? Creators behind apps like Viggle, ShopKick, CheckPoints, and Wikets all find that mobile devices are changing the ways people interact and shop, which is why these companies are jumping on the bandwagon. So if you like rewards, here are five mobile apps that insist you treat yourself. 1. This app practically pays you for watching television. 2. With this easy-to-use app, all you have to do is simply walk into a participating store, check in via the app, and earn points. 3. If you walk into a store and fire up CheckPoints, you'll see a list of featured items. 4. iPoints Since we already have to pay to purchase music and movies on iTunes, why not be rewarded for it in the process?