Buddha's remains may have been discovered by Chinese archaeologists. A discovery found hidden inside a 1,000-year-old Chinese chest could help archaeologists reach enlightenment. 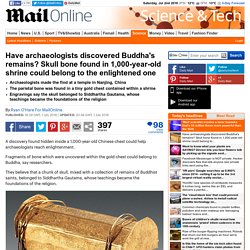 Fragments of bone which were uncovered within the gold chest could belong to Buddha, say researchers. Ancient Shrine That May Hold Buddha's Skull Bone Found in Crypt. Archaeologists have discovered what may be a skull bone from the revered Buddha, Siddhartha Gautama. 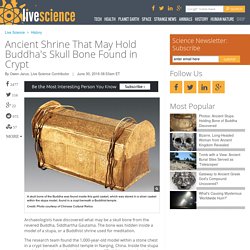 The bone was hidden inside a model of a stupa, or a Buddhist shrine used for meditation. The research team found the 1,000-year-old model within a stone chest in a crypt beneath a Buddhist temple in Nanjing, China. Inside the stupa model archaeologists found the remains of Buddhist saints, including a parietal (skull) bone that inscriptions say belonged to the Buddha himself. The model is made of sandalwood, silver and gold, and is covered with gemstones made of crystal, glass, agate and lapis lazuli, a team of archaeologists reported in an article published in the journal Chinese Cultural Relics.

The last living Chinese women with bound feet more than 100 years after the centuries-old symbol of beauty and status was banned. Women who had their feet bound as children in rural China photographed by Hong Kong-based Jo FarrellPractice, also called lotus feet, was a symbol of beauty and status and was started when girls were aged around fourHaving bound feet was a sign that a woman would be a good wife, as they would be subservient to their husbandsTradition started during the Song Dynasty and was banned in 1911 but continued in rural areas until around 1939 By Lucy Crossley Published: 20:04 GMT, 8 June 2014 | Updated: 21:25 GMT, 8 June 2014. 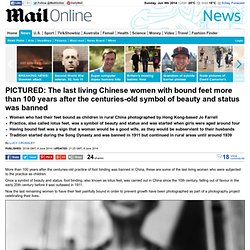 End of the Samurai: Stunning portraits of Japan¿s warrior class captures men at the height of their power before 19th century demise. The portraits are thought to have been taken in the late 1860sThe Samurai had long been Japan's highest social casteShortly afterwards, the Samurai was abolished by Emporer Meishi By Steve Nolan Published: 18:11 GMT, 16 April 2013 | Updated: 06:44 GMT, 17 April 2013 They were once Japan's highest social caste, remembered for their fearsome fighting skills and immortalized in popular culture since their demise at the end of the 19th century. 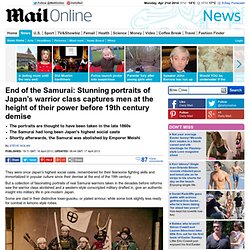 But a collection of fascinating portraits of real Samurai warriors taken in the decades before reforms saw the warrior class abolished and a western-style conscripted military drafted in, give an authentic insight into military life in pre-modern Japan. Some are clad in their distinctive tosei-gusoku, or plated armour, while some look slightly less ready for combat in kimono style robes. Japanese transport 100 years ago in pictures. Beautiful collection reveals simple transport used before car and train The images show how the upper classes paid others to carry them around while poor used cattle-drawn carts By Becky Evans Published: 11:14 GMT, 9 April 2013 | Updated: 23:38 GMT, 9 April 2013 It boasts one of the most advanced transport systems in the world and is renowned for pushing technological boundaries. 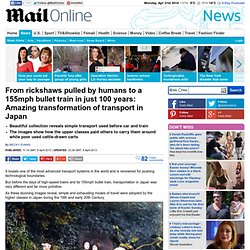 But before the days of high-speed trains and its 155mph bullet train, transportation in Japan was very different and far more primitive. As these stunning images reveal, simple and exhausting modes of travel were adopted by the higher classes in Japan during the 19th and early 20th Century. Fascinating photographs capture the opulent life of the royal family in a UNITED Korea more than a century ago.

The pictures give a glimpse of what life was like in Korea at the end of the turn of the 20th centuryThe nation, then united, was in the midst of huge upheaval with a 500-year-old dynasty about to lose powerThe decades that followed set the scene for the division into North and South Korea and the bloody Korean War By Steve Nolan Published: 01:58 GMT, 26 March 2013 | Updated: 08:08 GMT, 26 March 2013 With a young leader trying to assert his authority, mounting international tension and a growing army trying to establish itself as a military force to be reckoned with, life in Korea at the end of the 19th century would probably not sound all that alien to the inhabitants of at least one half of the former empire today. 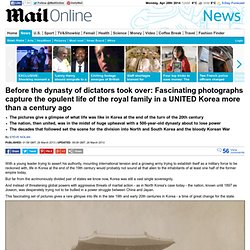 But far from the acrimoniously divided pair of states we know now, Korea was still a vast single sovereignty. Collection of 100-year-old photos show hidden wonders of Japan as it prepared to open its doors to the world. Pictures taken by Tamamura Kozaburo in 1910 were the first ever to be used to promote tourism in Japan Country only began trading with other countries following the Convention of Kanagawa in 1854 By Daily Mail Reporter Published: 12:33 GMT, 13 November 2012 | Updated: 08:01 GMT, 14 November 2012. 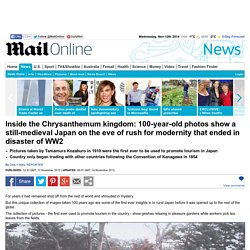 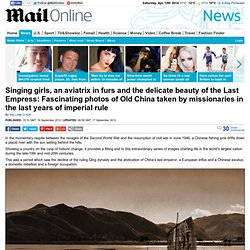 Bound By Tradition. On 20 October 1998, the Zhiqiang Shoe Factory in Harbin, China sent out a press release stating that they were officially halting production of a curious variety of footwear known as “lotus shoes.” 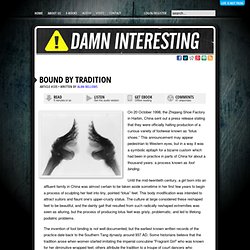 This announcement may appear pedestrian to Western eyes, but in a way it was a symbolic epitaph for a bizarre custom which had been in practice in parts of China for about a thousand years: a process known as foot binding. Until the mid-twentieth century, a girl born into an affluent family in China was almost certain to be taken aside sometime in her first few years to begin a process of sculpting her feet into tiny, pointed “lotus” feet. This body modification was intended to attract suitors and flaunt one's upper-crusty status. Generations of trial and error led practitioners of foot binding to master the craft of twisting and reshaping a young girl's sole. Foot binding was usually conducted in winter months so that the cold could be used to help numb the injuries and prevent infection.