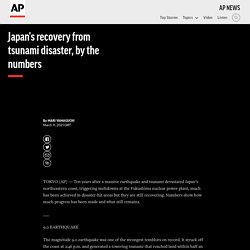 Numbers show how much progress has been made and what still remains. The magnitude 9.0 earthquake was one of the strongest temblors on record. The National Police Agency says 18,426 people died, mostly in the tsunami, including 2,527 whose remains have not been found. Nearly half a million people were displaced across the northeastern region. The government has spent 32 trillion yen ($295 billion) for the region’s recovery, including construction of roads, seawalls and houses, and support for people’s livelihoods. A decade after the disaster, no-go zones remain in nine Fukushima municipalities surrounding the wrecked nuclear plant. A Village Erased. The earthquake and tsunami of March 11, 2011, wiped away the ancient Japanese village of Kesen. 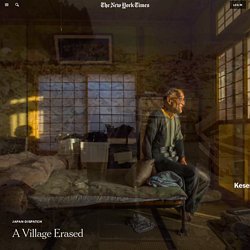 In the past decade, a small group of survivors has valiantly tried to rebuild the community, but a grim reality has set in: This emptiness will last forever. KESEN, Japan — For centuries, this village rode the currents of time: war and plague, the sowing and reaping of rice, the planting and felling of trees. Then the wave hit. Time stopped. Japan’s Three Great Gardens. The aesthetic sense of old Japan lives on in its three most famous gardens. 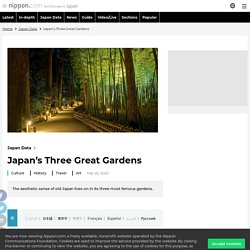 Japan’s “three great gardens”—Kairakuen, Kenrokuen, and Kōrakuen—were all created by daimyō (feudal lords) during the Edo period (1603–1868). The sense of beauty from centuries past still has the power to inspire today. All three were created in the kaiyū (circuit) style, based around a central pond, that typifies the Edo period.

People enjoyed the scenery while walking along garden paths, in contrast to zakanshiki gardens, which were designed to be viewed from indoor spaces such as the drawing rooms of palatial homes.

Sumo. Earthquakes - disasters. Hokusai and the wave that swept the world - BBC Culture. Rising in the East It’s worth recalling that what brought Hokusai and other ukiyo-e printmakers to the attention of Monet, Degas, Cassatt, and Lautrec were trade deals, on uneven terms, between Japan and the West. 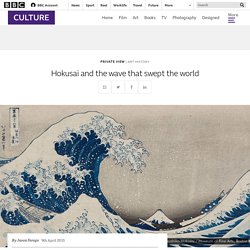 France and other industrial powers were thriving; Japan was in upheaval, as the shogunate gave way to the Meiji Restoration. So the exchange was uneven from the start, economically and culturally as well. 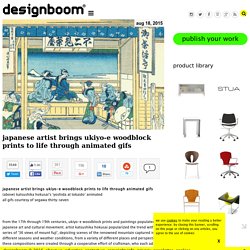 History of japan. Japanese mythology. Japanese myths, as generally recognized in the mainstream today, are based on the Kojiki, the Nihon Shoki, and some complementary books. 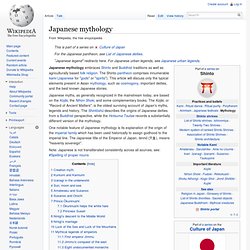 The Kojiki, or "Record of Ancient Matters", is the oldest surviving account of Japan's myths, legends and history. 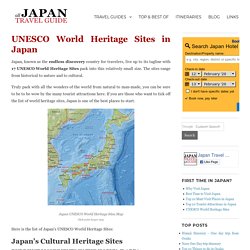 The sites range from historical to nature and to cultural. Truly pack with all the wonders of the world from natural to man-made, you can be sure to be to be wow by the many tourist attractions here. If you are those who want to tick off the list of world heritage sites, Japan is one of the best places to start. Japan UNESCO World Heritage Sites MapClick on for larger map. WORLD HERITAGE SITES - Japan Specialist. Skip to content Home/WORLD HERITAGE SITES We use cookies on this site to enhance your user experience. 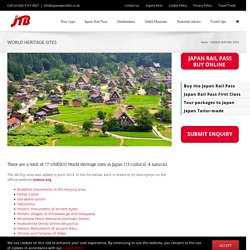 By continuing to use this website, you consent to the use of cookies in accordance with our Cookie Policy Accept. Black Lives Matter pushes Japan to confront racism. Image copyright Reuters To many Japanese, racism towards black people has long been considered something that happens in the US or Europe, not at home. 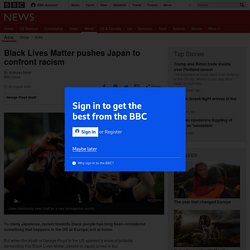 But when the death of George Floyd in the US sparked a wave of protests demanding that Black Lives Matter, people in Japan joined in too. The protests and marches in major cities pushed a debate about racism in the country, and whether enough was being done to confront and change things. 'Paper cuts of racism' Best UNESCO World Heritage Sites in Kyoto, Japan - Travel Caffeine.

Vanishing without a trace. Clash Of The Samurai: The History Of Japan's Genpei War - HistoryExtra. Impaled by an arrow, samurai general Minamoto Yorimasa knelt and wrote a farewell poem on his fan: “Like a fossil tree from which we gather no flowers, sad has been my life, no fruit to produce.” 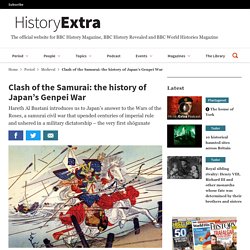 Accompanied by the symphony of ringing steel and bloodcurdling screams from the battle close by, the 74-year-old calmly pulled out his dagger and cut open his belly, leaving instructions for one of his men to throw his head into the river. His death, in 1180, is notable as perhaps the first recorded instance of the ritualistic suicide known as seppuku, but unremarkable as one of many caused by the Genpei War, the samurai civil war that swept through Japan at the tail end of the 12th century. Two noble houses, the powerful Minamoto and Taira clans, came to blows over who held the most influence over the emperor on the Chrysanthemum Throne. 72 photos By Shin Noguchi. Expresses solidarity with Japan as fire rips through World Heritage site in Okinawa. UNESCO offers its sincere solidarity with the people of Japan, and in particular the residents of Okinawa, who have lost a cultural and historical symbol of the Ryukyu islands.

UNESCO stands ready to assist the authorities as needed. In the early morning hours of 31 October, a number of buildings, including Shuri Castle of the World Heritage site of “Gusuku Sites and Related Properties of the Kingdom of Ryukyu” (Japan) were damaged by a large fire. Damaged buildings, including three main halls, were reconstructed after World War II, as they were previously destroyed during the war. This work was based on detailed documentation of the original and was noted in the World Heritage inscription as respecting the authenticity.

The authorities already announced that they will rehabilitate and reconstruct the damaged structures. Japanese Aesthetics. 1. Introduction Two preliminary observations about the Japanese cultural tradition to begin with. The first is that classical Japanese philosophy understands the basic reality as constant change, or (to use a Buddhist expression) impermanence. The world of flux that presents itself to our senses is the only reality: there is no conception of some stable “Platonic” realm above or behind it. This is a Japanese drum line! PHOTOGRAPHS OF HIROSHIMA AND NAGASAKI (GENSUIKIN) 1. Women protest judicial system after incestuous rapist walks free：The Asahi Shimbun. Hundreds of women in Tokyo protested two recent court rulings in which the judges recognized that rapes had occurred but allowed the perpetrators to walk because the victims could have offered more resistance.

At a rally called “Standing demonstration protesting sexual violence and sexual violence court rulings” near Tokyo Station on April 11, the demonstrators expressed disgust with the rulings and held signs that read “#MeToo,” “Yes Means Yes!” And “Give judges an education on human rights and sex!” “I am confounded and terrified by the not-guilty rulings,” said Minori Kitahara, a writer and activist. “I am afraid that victims of sexual abuse will not be able to raise their voices after such verdicts were given.” Dying Alone: Kodokushi, Japan's epidemic of isolation through the eyes of a 'lonely death' cleaner.

Learn how to read japanese kanji! Hundreds flock to get historic newspaper in Tokyo on day Japan announces new imperial era. (22) BEGIN Japanology - Moss. Thieves stole a rare 400-year-old bonsai from a Japanese garden. The grief-stricken owner offered care instructions. A Japanese Artist Depicts The Daily Life Of His Hamster, And It’s Adorable. Monmon Cats Tattooing Other Cats click 2x. Horitomo has been tattooing for over 20 years and is well-versed in the Japanese practice of tebori—a technique in which the body art is applied by hand. Many of his works reflect this influence, with one cat tattooing another. In addition, they feature an ancient ink wash painting style, so at first glance, it looks like they existed long ago. It's only after studying them that you realize: Monmon Cats is a peculiar and modern twist on a centuries-old art.

Here are illustrations of some tatted cats with their new ink: To make it even more meta, here are Horitomo's monmon cats as striking tattoos: On occasion, Horitomo also makes monmon dogs! Monmon Cats: Website | Instagram | Facebook h/t: [Spoon & Tamago] BBC: Hokusai - Old Man Crazy to Paint (2017) 12 Things NOT to do in Japan. Yoko Kanno & Seatbelts - Cowboy Bebop (Original Soundtrack 3) Blue. Kyoto at night. Aichi - Heartland of Japan's Craft Traditions - CYCLE AROUND JAPAN. Portland Taiko & No-No Boy. Tokyo 2020: The Olympics of the Future (INFOGRAPHIC) 2 clicks. How a kingfisher, an owl, & a penguin helped redesign Japan's Shinkansen. Kirie Octopus Cut From a Single Piece of Paper by Masayo Fukuda. Hot Spring Manners -How to bathe in a hot spring - A Paper Memo Pad That Excavates Objects as It Gets Used click 2x. Still life: Death and love dolls in Japan. Customers are asked to keep conversation to a minimum upon entering Leiya Arata’s home studio in Osaka.

By the time make-up and costumes are done, they are expected not to utter a single word, their transformation into a doll now complete. “I wanted to be beautiful and be possessed by someone. Not to be dominated, but to be loved and cherished, like sex dolls are,” Ai Kaneko, a 39-year-old single nurse who travelled down from Tokyo, tells EPA. Kaneko says the ‘factory’ saved her life from suicidal thoughts she began to have 15 years ago after finding the body of her boyfriend, who had hanged himself. “For many years after my boyfriend’s death, I was very unwell. Arata’s unique services have provided her with more stability. The strain Kaneko feels is, sadly, quite common in Japan’s highly regimented society. That is where Arata and her ‘factory’ of fantasies come in, catering to those with desires and dreams that might not be welcome in mainstream society.

Photos by Dai Kurokawa, EPA. NHK WORLD-JAPAN On Demand. Kanji of the year, meaning 'disaster,' symbolizes 2018 amid natural and human calamities. Tokyo fish market Tsukiji. 11 Beautiful Japanese Words That Don't Exist In English. Once, when I asked my friend from a small tribe in Burma how they would say “breakfast” there, she told me that they didn’t have a word for it because they only ate twice a day--lunch and dinner. I happen to have a lot of friends who speak English as their second language and that made me realize that a language has a lot to do with its culture’s uniqueness. 鼓童「打男 DADAN」 Kodo "Dadan"

West Japan Railways (JR West) last Friday (May 11) issued a statement after a train at Notogawa Station in Shiga Prefecture, which was running on the Biwako Line, mistakenly left the platform at 7.11.35am, reported Japanese website SoraNews24. This meant that the train was 25 seconds too early from its scheduled departure time of 7.12am. "The great inconvenience we placed upon our customers was truly inexcusable," JR West said in its statement.

According to SoraNews24, the conductor had thought that the train was supposed to depart at 7.11am, which was when he closed the doors to the 12-car train. Japanese. Mysterious snow scenes in Japan. [Image] Find a reason for being. Girl Drummer at Japanese Mall! So Cool! The Children’s Book That Caused Japan’s Raccoon Problem. Today, raccoons are a nuisance animal in Japan, rummaging through trash, stealing goods from vendors, feasting on crops and even damaging ancient Japanese temples with their sharp claws and abundant poop. Japanese fans pick up trash after World Cup match. 'Dementia towns': how Japan is evolving for its ageing population. Tokyo Medical University faces government pressure to quickly disclose results of sex discrimination probe. Gives Birth In Japan, Shows Food She Was Fed In The Hospital. Brothels and blossom: Japan's grandest journey – in pictures click 2x.