Breaking news, special reports, world, business, sport coverage of all South African current events. Africa's news leader. A strong earthquake with a preliminary magnitude of 7.2 hit off the coast of northeastern Japan today, the Japanese Meteorological Agency (JMA) said, but there were so far no reports of damage from the quake. 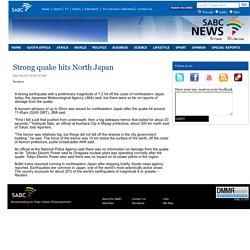 A tsunami advisory of up to 50cm was issued for northeastern Japan after the quake hit around 11:45am (0245 GMT), JMA said. "First I felt a jolt that pushed from underneath, then a big sideways tremor that lasted for about 20 seconds," Yoshiyuki Sato, an official at Kurihara City in Miyagi prefecture, about 300 km north east of Tokyo, told reporters. Breaking news, special reports, world, business, sport coverage of all South African current events. Africa's news leader. A team of South African rescue workers is among 30 groups which are on standby to travel to Japan following an earthquake which struck the north-east of the country earlier today. 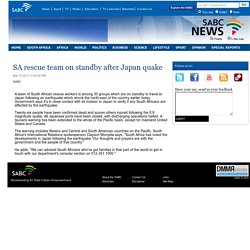 Government says it's in close contact with its mission in Japan to verify if any South Africans are affected by the earthquake. Twenty-six people have been confirmed dead and scores others injured following the 8.9 magnitude quake. All Japanese ports have been closed, with discharging operations halted. A tsunami warning has been extended to the whole of the Pacific basin, except for mainland United States and Canada. The warning includes Mexico and Central and South American countries on the Pacific. He adds: "We can advised South Africans who've got families in that part of the world to get in touch with our department's consular section on 012-351 1000.

" Breaking news, special reports, world, business, sport coverage of all South African current events. Africa's news leader. An earthquake with a magnitude of 6.1 struck off the northern Philippines today, shaking the capital Manila and northern provinces, but there were no reports of damage or casualties. 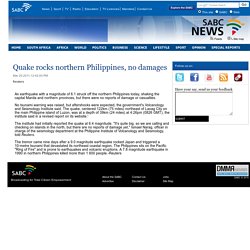 No tsunami warning was raised, but aftershocks were expected, the government's Volcanology and Seismology Institute said. The quake, centered 122km (75 miles) northeast of Laoag City on the main Philippine island of Luzon, was at a depth of 39km (24 miles) at 4:26pm (0826 GMT), the institute said in a revised report on its website.' The institute had initially reported the quake at 6.4 magnitude. "It's quite big, so we are calling and checking on islands in the north, but there are no reports of damage yet," Ismael Narag, officer in charge of the seismology department at the Philippine Institute of Volcanology and Seismology, told Reuters. The tremor came nine days after a 9.0 magnitude earthquake rocked Japan and triggered a 10-metre tsunami that devastated its northeast coastal region. 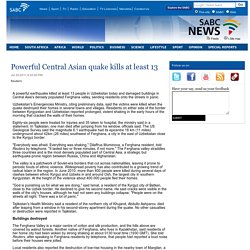 Uzbekistan's Emergencies Ministry, citing preliminary data, said the victims were killed when the quake destroyed their homes in several towns and villages. Residents on either side of the border between Kyrgyzstan and Uzbekistan reported prolonged, violent shaking in the early hours of the morning that cracked the walls of their homes. Eighty-six people were treated for injuries and 35 taken to hospital, the ministry said in a statement. Huge quakes strike off Indonesia:Wednesday 11 April 2012. The US Geological survey says the quakes were about 300 miles (500 km) southwest of the city of Banda Aceh, on the northern tip of Indonesia's Sumatra island. 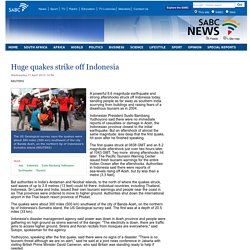 (REUTERS) A powerful 8.6 magnitude earthquake and strong aftershocks struck off Indonesia today, sending people as far away as southern India scurrying from buildings and raising fears of a disastrous tsunami as in 2004. Indonesian President Susilo Bambang Yudhoyono said there were no immediate reports of casualties or damage in Aceh, the Indonesian province closest to the initial earthquake. But an aftershock of almost the same magnitude, less deep that the first quake, hit soon after he finished speaking. The first quake struck at 0838 GMT and an 8.2 magnitude aftershock just over two hours later, at 1043 GMT. 7.2 earthquake shakes northern Japan :Friday 19 April 2013. Earthquake of 6 magnitude strikes Thailand, some damage:Monday 5 May 2014. Earthquake of 6 magnitude strikes Thailand, some damage:Monday 5 May 2014. Strong quake hits northern Japan:Tuesday 17 February 2015. Earthquakes are common in Japan, one of the world's most seismically active areas. 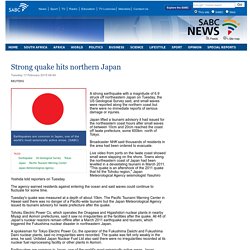 (SABC) A strong earthquake with a magnitude of 6.9 struck off northeastern Japan on Tuesday, the US Geological Survey said, and small waves were reported along the northern coast but there were no immediate reports of serious damage or injuries. Japan lifted a tsunami advisory it had issued for the northeastern coast hours after small waves of between 10cm and 20cm reached the coast off Iwate prefecture, some 600km north of Tokyo.

Broadcaster NHK said thousands of residents in the area had been ordered to evacuate. Live video from ports on the Iwate coast showed small wave slapping on the shore. The agency warned residents against entering the ocean and said waves could continue to fluctuate for some time. Tuesday's quake was measured at a depth of about 10km.