The Surreal Paintings of Vladimir Kush 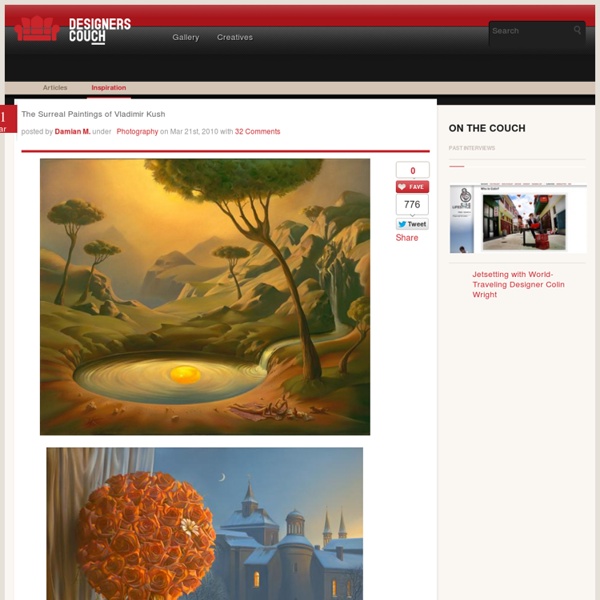 Artists Series - Steve Payne In Artists Inspire Artists’s “Artists Series” we single out one amazing artist who’s work could stand alone. Today we have Steve Payne, who created the Replaceface series, where Steve took digital copies of George Dawe’s paintings of russian generals and added celebrities faces to the portrait using photoshop. So as always, enjoy & live inspired! Related 3D Sketchbook Drawings Art & Design Nagai Hideyuki is Japanese artist who has the impressive skills to create 3D drawings. Using light and shadow his drawings give the illusion of jumping of the page when seen from the right angle.

22 Incredible Photos of Faraway Places Thailand Chances are you already know Steve McCurry as the man who took one of the most iconic photos of our time. It was of a 12-year-old Afghan refugee girl who's piercing green eyes told us her harrowing story. The image itself was named "the most recognized photograph" in the history of the National Geographic magazine and her face became famous as the cover photograph on their June 1985 issue. Beyond just that one photo, McCurry has shot over a million images spanning 35 years. More than anything, he is one of a few that has that amazing ability to capture stories of our shared human experience. 100 Illustrated Horror Film Posters: Part 1 For some, Halloween means costume parties and drunken debauchery. That’s never really been my style. Personally, I like to spend my Halloween evenings eating candy and watching scary movies. Yeah, I’m a nerd – I know.

textorizer Textorizer allows you to make pictures formed with text. It is best described by the sample images below. Although there are many versions around, the only one that is continuing to supported is this one. Excoffizer takes a picture and produces a vector rendition of the picture, made of parallel lines of varying thickness. It is inspired by Roger Excoffon's pictograms for the 1968 Grenoble Winter Olympics. The previous version of Textorizer came as a downloadable application. Minjae Lee – Colorful Illustrations Minjae Lee is a young South Korean artist whose work is filled with powerful colors, aggressive scenes and a clever blend of beauty, innocence and fragility. At just 22 years old, he’s a self-taught artist, that uses old-fashioned tools, such as markers, pens, crayons, acrylics, to create his illustrations. His dramatic works are all about pattern and texture that just add more authenticity to his illustrations. You can check out more of his fantastic works on his DeviantArt profile. For purchasing his canvas prints and other products, check out the artist’s website. I have loved color since I was 7 year old.

The Worlds Weirdest Book A truly unique work of fiction, ‘The Codex Seraphinianus‘ is a book that appears to be a visual encyclopedia of some unknown world or dimension. Written down in one of that worlds beautiful curving languages, the book by Italian artist, architect and industrial designer Luigi Serafini, explains the odd inhabitants and their colorful behaviors. The book was created between 1976 and 1978 and for the low price of about $500.00 you can ponder over your own copy… then again, if you can’t afford that, check out the video at the bottom. See Also MOUNTAINS OF BOOKS BECOME MOUNTAINS P:R Approved: Igor Kieryluk’s Gotham 1459! Note: In recent years we’ve seen Batman pop up throughout human history, but this arresting rendition by artist Igor Kieryluk takes the cake. Taking the denizens of Gotham City back 553 years and moving them to Europe, Kieryluk gives us a stunning rendition of what the Dark Knight would be if he was actually a knight. – Chris A.

Original John Berkey Sketches For Sale These are "Prelims" Sketches that John Berkey has done over the years. These were rough sketches sent out to the client to approve for angle, color, content... Some of these were selected to be used as finals for John Berkey to paint from and some were never used as finals at all. Curious Digital Paintings By Cyril Rolando Cyril Rolando is a young artist lives in the southern France. He is a self-taught artist, His approaches is set between surreal and fantasy style. In this post, we’ll showcase Cyril's curious digital paintings.

Brilliant Works by Pavel Guzenko Arthur Mask is an amazingly gifted 2d artist and illustrator based in Sao Paulo, Brazil. If you like video game inspired fan artworks, make sure to scroll through his great illustrations below… N.C. Winters is an artist based in the sunny San Diego, constantly drawing, painting, making webcomics, working digitally and even at times sculpting. He paints in watercolor and,or acrylic, usually on paper or wood and often resin the final piece for extra depth and shine. Maria Ilieva was born in 1973 in Sofia, Bulgaria.

John Berkey: A Tribute (John Berkey in his studio.) Sadly, this last week on April 29th, 2008-the master artist has left us. He was 75. He leaves behind a stunning lifetime of work. Shintaro Ohata Japanese Artist Shintaro Ohata has a unique approach in blending his mediums… Physical sculptures painted with painted canvas backgrounds. His everyday theme pieces give of a 3D/2D look when viewed as an installation piece. Take a further look, Top 100 of 2011?

I have never heard of this artist and I think this is abfab. Thank you. by gepocock Nov 29