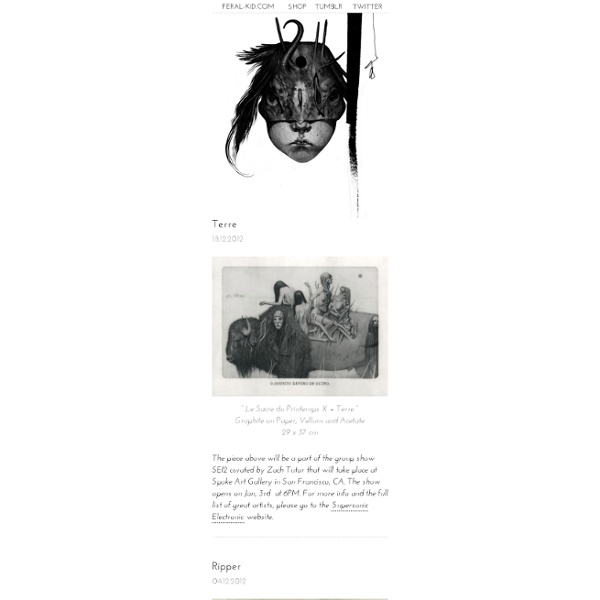 VERSO at Thinkspace, LA ” Godiva ”Acrylic on Paper and Wood64 x 74 cm It’s been a century since I last posted here, mainly because I want to change the blog system (also I am overwhelmingly busy). A lot of things happened that I will try to backtrack in the coming months and keep this space updated. The reason I am posting is that in two weeks (!) my next solo will be opening at Thinkspace Gallery in Los Angeles.

Sean Cheetham: Oil Painting To achieve accuracy and harmony in his alla prima figure paintings, Californian Sean Cheetham stresses drawing and a system of mixing colors based from “mud” mixtures, as he calls them, that govern shadows, midtones, and highlights. He recently offered lengthy demonstrations of those techniques during a five-day workshop. by M. Stephen Doherty Even though he is not yet 30 years old, Sean Cheetham has already established a strong reputation with art collectors and students in Southern California. He has presented sold-out exhibitions of his figure paintings, received important commissions, and packed classes with students eager to watch him paint the human form with accuracy, style, and drama.

Tender Times by Scott C "Pollens" We are so excited to have Scott C. here at Cotton Candy Machine for his first solo show in Brooklyn! Scott's paintings have appeared in galleries and publications around the world. He lives here in Brooklyn now, SO we are couldn't be happier to put on this show with him on his home turf. "Candy Stripes" and "Little Guy Three Spirits" These all new paintings depicting incredibly tender moments are full of Scott's iconic style and incredibly clever humor.

jour de pluie One account. All of Google. Sign in to continue to Blogger Find my account Forgot password? Sign in with a different account Create account juliandenarvaez New set of posters made for ADNEditorial Design, Illustration, Print Design2013 I had the pleasure once again of working with Folio art to produce the illustrations for this Douglas and gordon campaign. Special thanks to Chris Belson from Folio Art, for all his hard work and excellent management, and to Ellie Kingsbury also from Folio Art, for always being ready to collaborate. Drawing, Illustration2013 PAPA SANGRE It was really nice to illustrate this amazing application game in which I work with with two wonderful creative teams, Folio art and Something Else. Papa Sangre is a video game with no video. It’s a first-person thriller, done entirely in audio by an award-winning team of game designers, musicians, sound designers and developers.

Artist Pictured: Eve on the pillar-Sophia in b.g. & the his oil painting Phoenix Arise within Leigh's painted 3D studio library and wonder-study-The Hieroglyph of the Human Soul. On 9-11 when the towers came down Leigh began painting this domestic / creative / mythic space and has over the years continued to work on it constantly. The painted home environment of the Hieroglyph of the Human Soul is a creative epiphany that becomes multidimensional with Chroma Depth 3D glasses. and is unprecedented in art. Take a look.

Designchapel March 21st, 2011 Selected Works: Illustration Labels: Designchapel, Work in progress I’m have started to prepare some stuff for an exhibition this spring in Stockholm. Two of the prints will be modified versions of my nun illustrations from 2001/2002. Barbara Cooney Barbara Cooney (August 6, 1917 – March 10, 2000) was an American writer and illustrator of more than 200 children's books, published over sixty years. She won two Caldecott Medals, which are awarded to the year's best-illustrated U.S. picture book[1] and a National Book Award. Her books have been translated into 10 languages.[2] For her contribution as a children's illustrator, Cooney was the U.S. nominee in 1994 for the biennial, international Hans Christian Andersen Award, the highest international recognition for creators of children's books.[3][4]

Cartoon Modern Illustrator Eric Sturdevant has posted some terrific Cliff Roberts illustrations on his blog Fun All Around . Roberts (1929-1996) drew these illustrations for the FORD TIMES in the late-1940s while living in Detroit. Right around the time he made these illustrations, he also began to work in animation at Detroit’s Jam Handy Organization.

A Stunning, Intricate Maze Made From 2,200 Pounds of Salt Motoi Yamamoto has to be the most patient man in the world. A Japanese artist, Yamamoto uses salt to create monumental floor paintings, each so absurdly detailed, it makes A Sunday Afternoon on the Island of La Grande Jatte look like child's play. He calls them, fittingly, his Labyrinths. Yamamoto's latest labyrinth creeps out from a brick tunnel at the Fondation Espace Ecureuil, a gallery in France. He made it -- as he makes all these installations -- by sprinkling salt on the floor through a plastic bottle used for machine oil, starting at the back of the tunnel, then moving forward to avoid stepping on the designs he's already drawn. The whole thing took 50 hours over the course of five days and a whopping 2,200 pounds of salt.