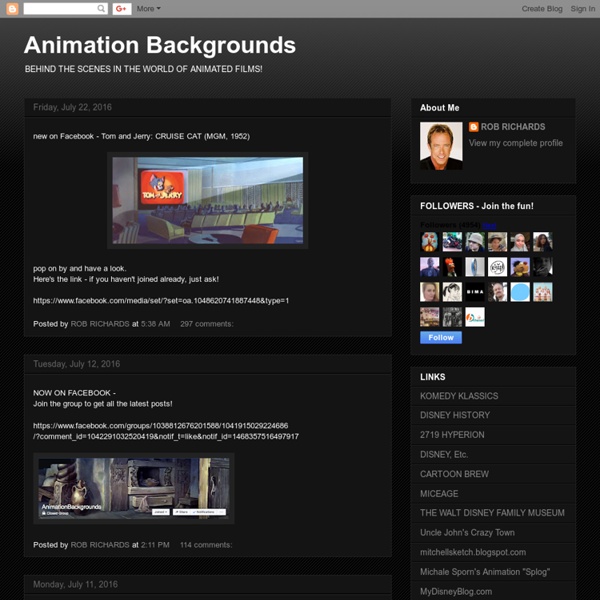 A little bit about the guy behind the blog... Taken July 2013 (at Disney World) After a long absence, I wanted to greet you personally... and explain my absence, my journey and my return. In 2009, my personal life took a dark turn. With all that was going on, I just didn't have the energy to blog after several years.

Animation with a moustache Posted on March 17, 2014 | Leave a CommentFiled under Animation Having moved back to London to work on a really cool cartoony game I can’t talk much of for now, I am currently focusing on life drawing and painting most of my evenings. London is probably the only place in the world where Life drawing classes happen pretty much every day. For that reason, I decided to start a new blog and I will be posting all sort of useful information I come across on it and I might even post some of my drawings. Hopefully you might find some information helpful .

Torchlight Works of Jeremy Huxley Followers Art Styles Tuesday, April 20, 2010 Torchlight Karen J Lloyd's Storyboard Blog And we’re back! Here’s Part 2 of the interview I did with Pixar Story Artist Matthew Luhn. You can find Part 1 of Matthew’s interview here. Enjoy. THE ART OF DAVE PIMENTEL Update: Any orders in the month of December will receive a 4x6 original signed sketch of my "French girlie" similar to this one. (Without the frame of course) My Book is now available!!! I've been developing my art for many years and learning as much as I possibly could from many great artists who surround me and from those who've come before me.

Animation Tidbits Creating a Chinese Firewatch logoLove the logo? Buy the shirt here!I first considered a Chinese localized name for Firewatch when I gave a talk at GDC China 2015, and they had translated the session title as <看火人> (word for word, this is “Watch Fire Man”). I grew up in Hong Kong reading Chinese, and I thought the localized name was well chosen—because while it mostly suggests “fire lookout” (which doesn’t specifically imply “firefighting”), it also allows a more ominous interpretation of “person watching the fire burn.”

stuff. (by ido yehimovitz): IPHONE PIMPIN - "Slide to open" i've decided to make an iphone wallpaper (and hopefully some more in the future, if i'll be able to commit to the task) for you humble folks. a little token of gratitude for all the love and support you guys been showing both here and on FB. so enjoy and..err.. stuff edit: had some requests, so i've added a tablet version, retina supported. now you can pimp out your tablet as well. enjoy! I am Captain Mexico Ravelle Elite 2006 Flametop (veneer) Honey Burst sjanweijers:I love painting marshlands and forests, creating places for little creatures to hide and sleep.. sjanweijers:Two pages I did for a children’s book called Myrmidons -written by Kid Toussaint.It’s about a little girl that is so bored that she’s using her imagination to create super cool worlds with ants and other animals as characters in an action adventure like story :) Heritage H150 CM Amber 1996 Sunny pics Guyatone Lapsteel Birthday present. Can’t be happier. antoinedode:joker-batmanI’m so in love with this designs!

Amir's Portfolio environments - Page 3 I have been experimenting with sky textures lately, and tried to use 16bit textures for skydomes to have high quality skies without any compression artefacts showing up no matter the resolution or the exposure of the texture. I also did some attempts to make stylised skies based on photo just by running a few photoshop scripts. Some results : I also did an "in engine" test with a low resolution 16bit texture projected on a dome to see how it looks. blog self portrait! turned out a bit cartoony, proportion-wise. process video here. the one and only green bikini! tried another sketch in the style of this one. i like doing these kinds of portraits/caricatures/whatever they are!

This is a blog that highlights some beautiful examples of animation backgrounds. This is a part of animation that many people over look, but adding a stunning background will help your whole animation pop. Whatever you do, don't forget to put time into it! by baileykretz Oct 22