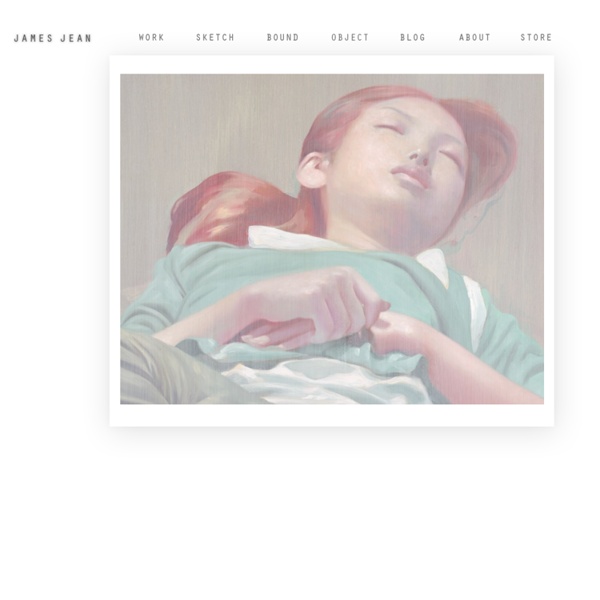 Dash Shaw Nice Google translation of a French review of New School: This should hit you at the opening of New School, the last BD Dash Shaw and published by Editions That There is of course the graphics. Detonates New School and impresses primarily through the shots and markers impressive colors of the author. Tender Times by Scott C "Pollens" We are so excited to have Scott C. here at Cotton Candy Machine for his first solo show in Brooklyn! Scott's paintings have appeared in galleries and publications around the world. He lives here in Brooklyn now, SO we are couldn't be happier to put on this show with him on his home turf.

2DBean Warmups Hmmm Good question. I cannot honestly tell you when or even if it even happened. I’m not trying to be a drama queen or self loathing. It’s truly an Amorphis thing what we call a portfolio/attractive/appealing art. You know it when you see it. Jed Henry Illustration Did you miss us? It’s been a while, but Dave has completed a brand new video (yay!): The Making of ‘Flight of Fantasy’.You can order your own handmade print at our website: ukiyoeheroes.com atelier-sento: Art of Nico Marlet You guys. Go see How to Train Your Dragon 2 this weekend, then come to the How to Train your Dragons 2 show next week!! It’ll have a tonne of artwork by artists from Dreamworks, including the above by James Baxter, Nico Marlet, Johane Matte (who made a badass comic you can get at the gallery), Megan Nicole Dong, Le Tang, Joe Pitt, and myself. June 21 @ Gallery Nucleus.

Barbara Cooney Barbara Cooney (August 6, 1917 – March 10, 2000) was an American writer and illustrator of more than 200 children's books, published over sixty years. She won two Caldecott Medals, which are awarded to the year's best-illustrated U.S. picture book[1] and a National Book Award. Her books have been translated into 10 languages.[2] For her contribution as a children's illustrator, Cooney was the U.S. nominee in 1994 for the biennial, international Hans Christian Andersen Award, the highest international recognition for creators of children's books.[3][4] Life[edit] Cooney was born on 6 August 1917 in Room 1127 of the Hotel Bossert in Brooklyn, New York,[2] to Russell Schenck Cooney (a stockbroker) and his wife Mae Evelyn Bossert (a painter).

Paul Robertson -Artificial neural network- Remember to check my patreon for sketches and works in progress 🌟Celestial Core🌟 Cartoon Modern Illustrator Eric Sturdevant has posted some terrific Cliff Roberts illustrations on his blog Fun All Around . Roberts (1929-1996) drew these illustrations for the FORD TIMES in the late-1940s while living in Detroit. Right around the time he made these illustrations, he also began to work in animation at Detroit’s Jam Handy Organization. Gene Deitch writes more about Roberts’s early animation career in his on-line autobiography . The first animated work that Roberts designed at Jam Handy was the industrial film BUILDING FRIENDS FOR BUSINESS (1950).

Yuchung Peter Chan Visual Development A crop of a painting I did for How to train your dragon 2. another still life and pleinair study combo. A pleinair and a still life study of my toys Peter Gut Peter Gut is a Swiss typographer, illustrator and caricaturist based in Winterthur. He has collaborated for years with the weekly magazine Facts, and today works for Weltwoche, the Neue Zürcher Zeitung and the business magazine Bilanz. Gut also designs book covers and thanks to my daughter Michelle, who bought me the postcard above. His surreal and whimsical humour

Halfway down the garbage chute tanglefootcomic: This is just a shot in the dark, but I don’t suppose anybody following me has experience doing freelance character design work? Say for animated TV series, feature films or computer games? I need a bit of business advice from somebody in the know. I’ve done a little of this kind of thing in a semi-professional capacity in the past, but I’m still pretty ill-equipped to deal with the financial side of the enterprise. Thanks in advance!

15 influences that stick with you, FOREVER. - Yuko Shimizu I don’t love getting asked about my artistic influences and inspirations. I had stopped answering the question all together some years ago. The biggest reasoning behind it was because I have lived long enough to the point things that have influenced me at some point in my life often have no relevance to who I am now, though, I may still see those early influences in my work. If I name all the influences, past and present, then my list would probably be as thick as a dictionary. Roman Muradov View high resolution This was made for Facegasm/CALA which I won’t be attending in person due to an immense fatigue that has been ruining my life & work for the last year or so, particularly recently. Probably this old thing that I’ve been neglecting for a decade. If anyone has any tips on dealing with chronic fatigue and resulting depression, drop me a line ok.