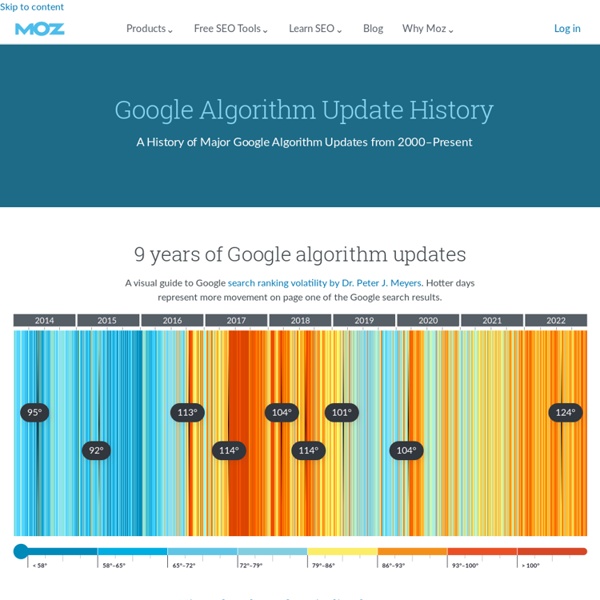 Related:  A set of resources for Web 3.0 and Instant Gratification • seonewindia

"Moving from Education 1.0 Through Education 2.0 Towards Education 3.0" by Jackie Gerstein Abstract This article compares the developments of the Internet and the Web with those of education. The web influences people's way of thinking, doing and being, and people influence the development and content of the web.

Google Algorithm Updates & Changes: A Complete History March 9, 2018 Broad Core Algorithm Update December 12, 2017 Maccabees Update September 8, 2017 Google's August Core Algorithm Update A.K.A Medic Update Is Global Google on 1st August has launched one search algorithm update. And after the complete rollout of this update, the SEO industry experts have come to a conclusion that this update has impacted the medical and health sector the most and named it as Medic Update. To provide some advice to webmasters on this update, Google said, “There’s no “fix” for pages that may perform less well other than to remain focused on building great content.

Google Ranking Factors: The Complete List You probably already know that Google uses about 200 ranking factors in their algorithm… But what the heck are they? Well today you’re in for a treat because I’ve put together a complete list. Some are proven. Some are controversial. Others are SEO nerd speculation. BBC Article by Cellan-Jones 2014 on Stephen Hawking Media playback is unsupported on your device Prof Stephen Hawking, one of Britain's pre-eminent scientists, has said that efforts to create thinking machines pose a threat to our very existence. He told the BBC:"The development of full artificial intelligence could spell the end of the human race."

How SEO company in India improve business search engine rankings? The SEO company is the experts in SEO who help to expand and grow the business. It takes care of the customer needs and ensure to make them happy and satisfied with prompt and quality services. They look at various key areas of SEO for the proper functioning of the website. [DATA] 100+ Sites Impacted By Google Medic Update Analyzed Contrary to initial speculation, Google’s Medic Update has ramifications that go way beyond the health industry and establishing author expertise. A year from now we may look back at August 2018 as a pivotal shift in how SEO works, on par with the introduction of Google Panda and Penguin (if less cutely named). As more hard data emerges, we’re starting to see a clearer picture of which factors played a role in rankings changes, and how the Medic Update was about much more than just Expertise, Authority, and Trust. A lot of great websites lost rankings after the Medic update.

The Swift Programming Language: A Swift Tour Tradition suggests that the first program in a new language should print the words “Hello, world!” on the screen. In Swift, this can be done in a single line: Information Search Process “Longitudinal Evidence of the Influence of the ISP on Information Workers.”, 2018. Read the full paper here. PowerPoint presentation of the Information Search Process The model of the Information Search Process (ISP) is one of the most highly cited works in Library and Information Science as noted in the following citation studies: Timelines of Creativity: A Study of Intellectual Innovators in Information Science. What are the advantages of e-commerce SEO? E-commerce SEO is an online platform ensuring users to increase the website ranking and appear among those ten organic search results. The SEO is all about the online traffic. People search for the keywords and the content related to it. The site with more relevant, fresh and genuine content will appear on the top of the page rather than the one with copied or non-relevant content.

Big Changes at Google: What is a "Broad, Core Algorithm Update"? Note: This is an edited version of research we put together for CanIRank Full Service clients. This is part 1, What is a broad core algorithm update?, part 2 dives into data around What changed in in the Google Medic Update?, and part 3 (coming soon!) On August 1st, Google’s Search Liaison Danny Sullivan tweeted that the company was rolling out a “broad core algorithm update”, since branded by some the “Medic Update” due to the outsized impact it had on sites in the health niche.