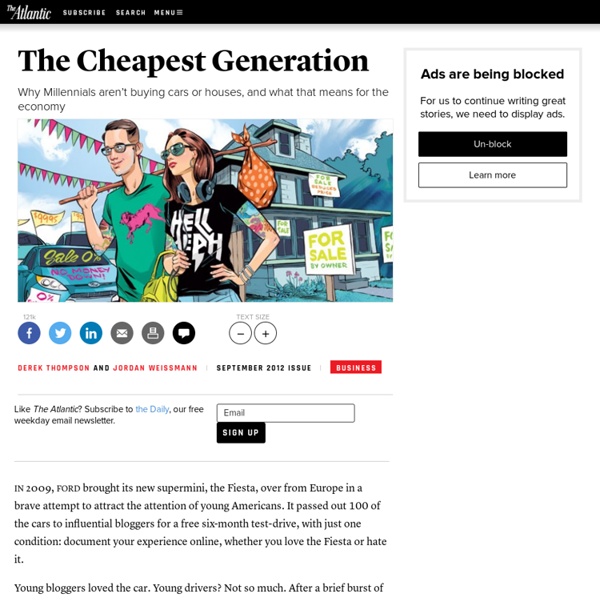 In 2009, Ford brought its new supermini, the Fiesta, over from Europe in a brave attempt to attract the attention of young Americans. It passed out 100 of the cars to influential bloggers for a free six-month test-drive, with just one condition: document your experience online, whether you love the Fiesta or hate it. Young bloggers loved the car. Young drivers? Not so much. After a brief burst of excitement, in which Ford sold more than 90,000 units over 18 months, Fiesta sales plummeted. Don’t blame Ford. Adulthood, Delayed The Great Recession changed young Americans' attitudes about what it means to be an adult.by Derek Thompson In a bid to reverse these trends, General Motors has enlisted the youth-brand consultants at MTV Scratch—a corporate cousin of the TV network responsible for Jersey Shore—to give its vehicles some 20-something edge. Perhaps. Since World War II, new cars and suburban houses have powered the economy and propelled recoveries.

Last Word On Mozilla I wrote about the Mozilla CEO termination thing (I, II, III). The point of my writing on it was just to continue my long-standing project of pointing out that most procedural arguments — by which I mean content-neutral and substance-neutral arguments nominally divorced from policy and cultural preferences — are not serious. It seems to me that most people have some extreme limit to the kind of processes they are willing to use, but within that limit, they just use and find arguments for whatever processes lean towards their preferred substantive outcomes. In making this point, I have not (as you would expect) tried to make some procedural justification for firing people for their political views. I have not tried to make some procedural justification for market coercion or civil coercion.

What are negative interest rates? 18 December 2014Last updated at 11:04 ET Tom Espiner Business reporter Switzerland's National Bank (SNB) is to impose an interest rate of minus 0.25% on large amounts of money deposited in the country. The negative rate will apply to "sight deposits" - a type of instant access account for banks and large companies - of more than 10m Swiss francs (£6.5m). But why would a bank want to cut the value of deposits it holds, or charge depositors? Swiss National Bank wanted to lower the value of the Swiss franc What are negative interest rates?

‘Slomo’ Slomo came into my life at an opportune moment. Having just rolled into my 30s, I was looking for both a film subject and some wisdom on how to approach the encroaching “middle third” of my life — the years when youthful idealism is so often blunted by adult responsibilities. Around this time, during a business trip to San Diego, my father had a chance meeting on the Pacific Beach boardwalk with John Kitchin, an old medical school classmate.

Swiss National Bank will cut interest rate to minus 0.25% 18 December 2014Last updated at 08:57 ET Switzerland's National Bank (SNB) will bring in a negative interest rate cutting the value of large sums of money left on deposit in the country. The Bank is imposing a rate of minus 0.25% on "sight deposits" - a form of instant access account - of more than 10m Swiss francs ($9.77m). It is trying to lower the value of the Swiss franc, which has risen recently. Russia's market meltdown and a dramatic plunge in the oil price have led investors to seek "safe havens". Brigid Schulte’s Overwhelmed and our epidemic of busyness. Photo by Thinkstock Are you too busy? You should be, and you should let people know in a proud but exasperated tone. Like this, from an old colleague I recently asked for advice: “I would like to help but I can not. I am desperately trying to finish a screenplay and a talk I need to give in Milan. Once I get an assistant I will be happy to help!”

Denmark, Deutschland and deflation: strange times for EU 29 January 2015Last updated at 14:06 ET By Andrew Walker BBC World Service Economics Correspondent Denmark has been tying its currency, the krone, to the euro. There have been two important, connected economic developments in Europe. New official figures from Germany show that prices have fallen, by 0.5%, over the previous 12 months. How economic news keeps us dumb and stops us changing the world In their more serious moods, news organisations tell us they want to explain the world to us. And that often means talking about money. There’s certainly a lot of information about money in the news: our eyes are regularly directed towards a variety of key indicators on the economic dashboard, including the money supply (M1, M2, MZM), central bank reserves, factory orders, the consumer price index (CPI), building permits, jobless claims, the deficit, the national debt and, most significantly of all, the GDP. © Petercam

End 'gross indignity', Greek FM Varoufakis tells Germany 5 February 2015Last updated at 13:53 ET Yanis Varoufakis is in Berlin attempting to renegotiate Greece's debt Greece's new finance minister has urged Germany to help end the "gross indignity" of the Greek debt crisis. Yanis Varoufakis said "too much time, hopes, lives" had been wasted by Greece's forced austerity programme. He was speaking after talks with his German counterpart, Wolfgang Schaeuble, who said a reduction of Greece's debt was off the agenda. Mr Varoufakis has been seeking support for Greece's plan to renegotiate its massive international bailout.

The Benefits of Interning on a Farm - The Atlantic - The Atlantic High in the mountains of Telluride, Colorado, Tomten Farms offers the opportunity to learn agriculture through an internship program. Named after a mischievous gnome in an old children’s tale, the farm teaches young people the pillars of permaculture. “Let’s give people the opportunity to try something,” says the farm’s owner Kris Holstrom in this short film, 9,000 Feet. “You learn the most from failing, but if you aren’t encouraged to try, you won’t.”