How to Identify Your Passions 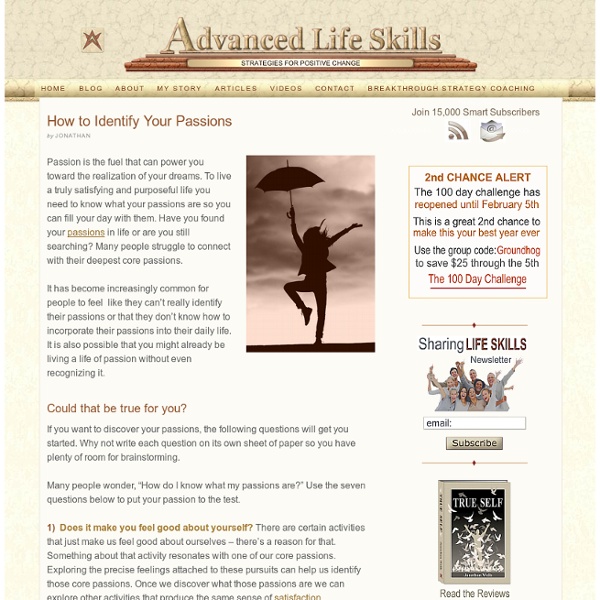 Passion is the fuel that can power you toward the realization of your dreams. To live a truly satisfying and purposeful life you need to know what your passions are so you can fill your day with them. Have you found your passions in life or are you still searching? Many people struggle to connect with their deepest core passions. It has become increasingly common for people to feel like they can’t really identify their passions or that they don’t know how to incorporate their passions into their daily life. Could that be true for you? If you want to discover your passions, the following questions will get you started. Many people wonder, “How do I know what my passions are?” 1) Does it make you feel good about yourself? 2) Would you do it for free? 3) Do you lose all track of time when you do it? 4) Do you talk about it to anyone who will listen? 5) Are you delighted to teach it to others? 6) Would you like to spend more of your time doing it? Your passions are waiting! Related:  kkinzinho

19 Websites That Will Make You Smarter in Every Way It’s almost unbelievable that in this day and age almost everyone is carrying around a library of knowledge, richer in resources than that of the Library of Alexandria. So it comes as no surprise that many want to utilise this resource, the internet, to become a better, smarter, productive being! With this in mind, 19 of the top websites that will make you a smart person, in every way, has been compiled for you. Academic 1. Smarterer Want to test your writing ability? 2. If you’re a fan of TED Talks, this is basically the TED Talks of the university world. 3. Flash cards, mixed with the addictive nature of gaming. 4. Don’t have the time or money to read a book, but still manage to sit and read on the internet for an obscene amount of time every day? 5. Treehouse basically has something for everyone. 6. A vast compendium of educational resources, on literally hundreds of different topics. 7. Udacity is almost like the vocational learning place of the Internet. 8. Classes streamed live. 9.

thought-waves | frequencies thought-waves by Gabriel Levy I grew up by the shores of Lake Michigan. Much later in my life I was exposed to the more gruesome power of such waves. In the short story, “The Seventh Man” Haruki Murakami describes a wave as a doorway into the “other world” that characterizes many of his stories. In the tip of the wave, as if enclosed in some kind of transparent capsule, floated K’s body, reclining on its side. I don’t know what spirituality is, but when I think of the word, I think of waves—thought waves. Because I am interested in the materiality of thought and its medium, I often ask myself: what is thought made of? Perhaps thought is like a sound wave. Certainly one medium of thought is sound waves. Sound waves are waves of pressure. Perhaps thoughts, like sound, need to travel in a medium. In former centuries physicists looked in vein for the medium in which light traveled; they called this imaginary medium aether. Perhaps thought has this dual nature too.

Mindfulness Is Not Meditation: How to Navigate Your Way to Prescence | High Existence Mindfulness is a word being thrown around a lot recently. But there seems to be a lot of misunderstanding about what it is. In this article I will show you the difference between mindfulness and meditation – and why it matters. To be mindful, in very general terms, is to be aware. Imagine this: You’re walking with a friend down a busy road, it’s the middle of winter, and there’s snow and ice, cars are flying past, and a hundred men in business suits scuttle by with coffees. Question: what does that mean to you? It means be aware of the ice, take notice of it, don’t let it escape you or you might suffer the repercussions. It’s not meditation. If there is one prerequisite to being mindful, it’s that you need to be ‘in the moment’ if you’re going to notice the goings-on around you. You can only focus on one world at a time—the one outside your head, or the one within it.Tweet This That’s the layman’s version of being mindful. There are, however, different interpretations. What is Meditation? Look:

Let It Ripple | Mobile Films for Global Change The Law of Attraction - Beyond The Secret...The Moses Code How to Build Self-Discipline Discipline is freedom. You may disagree with this statement, and if you do you are certainly not alone. For many people discipline is a dirty word that is equated with the absence of freedom. In fact the opposite is true. Self-discipline involves acting according to what you think instead of how you feel in the moment. Work on an idea or project after the initial rush of enthusiasm has faded awayGo to the gym when all you want to do is lie on the couch and watch TVWake early to work on yourselfSay “no” when tempted to break your dietOnly check your email a few of times per day at particular times In the past self-discipline has been a weakness of mine, and as a result today I find myself lacking the ability to do a number of things which I would like – e.g. to play the guitar. If you struggle with self-discipline, the good news is that it can be developed. 1. Discipline means behaving according to what you have decided is best, regardless of how you feel in the moment. 2. 3. 4. 5.

We are all core receivers.