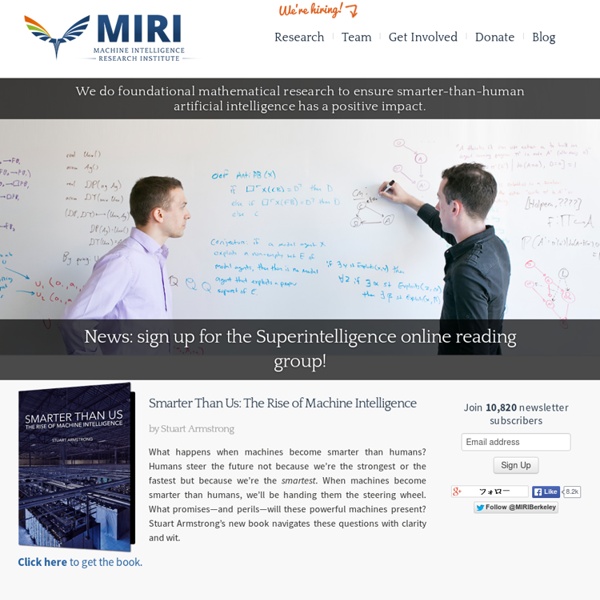 Artificial Intelligence introduction › cross-links to AI Context The PRL project aims to naturally express the reasoning of computer scientists and mathematicians when they are justifying programs or claims. It represents mathematical knowledge and makes it accessible in problem solving. These goals are similar to goals in AI, and our project has strong ties to AI. We see AI as having a definite birth event and date: the Dartmouth Conference in the summer of 1956 organized by John McCarthy and Marvin Minsky. According to many AI researchers, they have set the agenda for a large part of Computer Science in the sense that AI successes seeded separate research areas of CS, some no longer even associated with AI. It is clear that our project has benefitted substantially from AI research, and that will continue. For us, the science fiction is a world in which the progeny of Nuprl are helping computer scientists crack the P = NP problem or helping mathematicians settle the Riemann hypothesis. Knowledge Representation

Stanford to Research the effects of Artificial Intelligence What will intelligent machines mean for society and the economy in 30, 50 or even 100 years from now? That’s the question that Stanford University scientists are hoping to take on with a new project, the One Hundred Year Study on Artificial Intelligence (AI100). “If your goal is to create a process that looks ahead 30 to 50 to 70 years, it’s not altogether clear what artificial intelligence will mean, or how you would study it,” said Russ Altman, a professor of bioengineering and computer science at Stanford. “But it’s a pretty good bet that Stanford will be around, and that whatever is important at the time, the university will be involved in it.” The future, and potential, of artificial intelligence has come under fire and increasing scrutiny in the past several months after both renowned physicist, cosmologist and author Stephen Hawking and high-tech entrepreneur Elon Musk warned of what they perceive as a mounting danger from developing AI technology. Written By: Sharon Gaudin

Peering into the Future: AI and Robot brains In Singularity or Transhumanism: What Word Should We Use to Discuss the Future? on Slate, Zoltan Istvan writes: "The singularity people (many at Singularity University) don't like the term transhumanism. Transhumanists don't like posthumanism. See what the proponents of these words mean by them and why the old talmudic rabbis and jesuits are probably laughing their socks off. Progress toward AI? Baby X, a 3D-simulated human child is getting smarter day by day. "An experiment in machine learning, Baby X is a program that imitates the biological processes of learning, including association, conditioning and reinforcement learning. This is precisely the sixth approach to developing AI that is least discussed by “experts” in the field… and that I have long believed to be essential, in several ways. It's coming. Meet Jibo, advertised as "the world's first family robot." Ever hear of “neuromorphic architecture?” Now… How to keep what we produce sane? Creating Superintelligence Developing Brain

Artificial intelligence: two common misconceptions Recent comments by Elon Musk and Stephen Hawking, as well as a new book on machine superintelligence by Oxford professor Nick Bostrom, have the media buzzing with concerns that artificial intelligence (AI) might one day pose an existential threat to humanity. Should we be worried? Let’s start with expert opinion. A recent survey of the world’s top-cited living AI scientists yielded three major conclusions: AI scientists strongly expect “high-level machine intelligence” (HLMI) — that is, AI that “can carry out most human professions at least as well as a typical human” — to be built sometime this century. First, should we trust expert opinion on the timing of HLMI and machine superintelligence? But can we do better than expert opinion? Given this uncertainty, we should be skeptical both of confident claims that HLMI is coming soon and of confident claims that HLMI is very far away. Second, what about social impact?

FLI - Future of Life Institute (If you have questions about this letter, please contact tegmark@mit.edu) Artificial intelligence (AI) research has explored a variety of problems and approaches since its inception, but for the last 20 years or so has been focused on the problems surrounding the construction of intelligent agents - systems that perceive and act in some environment. In this context, "intelligence" is related to statistical and economic notions of rationality - colloquially, the ability to make good decisions, plans, or inferences. The adoption of probabilistic and decision-theoretic representations and statistical learning methods has led to a large degree of integration and cross-fertilization among AI, machine learning, statistics, control theory, neuroscience, and other fields. The progress in AI research makes it timely to focus research not only on making AI more capable, but also on maximizing the societal benefit of AI. List of signatories

Artificial intelligence AI research is highly technical and specialized, and is deeply divided into subfields that often fail to communicate with each other.[5] Some of the division is due to social and cultural factors: subfields have grown up around particular institutions and the work of individual researchers. AI research is also divided by several technical issues. Some subfields focus on the solution of specific problems. Others focus on one of several possible approaches or on the use of a particular tool or towards the accomplishment of particular applications. The central problems (or goals) of AI research include reasoning, knowledge, planning, learning, natural language processing (communication), perception and the ability to move and manipulate objects.[6] General intelligence is still among the field's long-term goals.[7] Currently popular approaches include statistical methods, computational intelligence and traditional symbolic AI. History[edit] Research[edit] Goals[edit] Planning[edit] Logic-based

Applications of artificial intelligence Artificial intelligence has been used in a wide range of fields including medical diagnosis, stock trading, robot control, law, remote sensing, scientific discovery and toys. However, many AI applications are not perceived as AI: "A lot of cutting edge AI has filtered into general applications, often without being called AI because once something becomes useful enough and common enough it's not labeled AI anymore," Nick Bostrom reports.[1] "Many thousands of AI applications are deeply embedded in the infrastructure of every industry." In the late 90s and early 21st century, AI technology became widely used as elements of larger systems, but the field is rarely credited for these successes. Computer science[edit] AI researchers have created many tools to solve the most difficult problems in computer science. Finance[edit] Banks use artificial intelligence systems to organize operations, invest in stocks, and manage properties. Hospitals and medicine[edit] Heavy industry[edit] Music[edit]