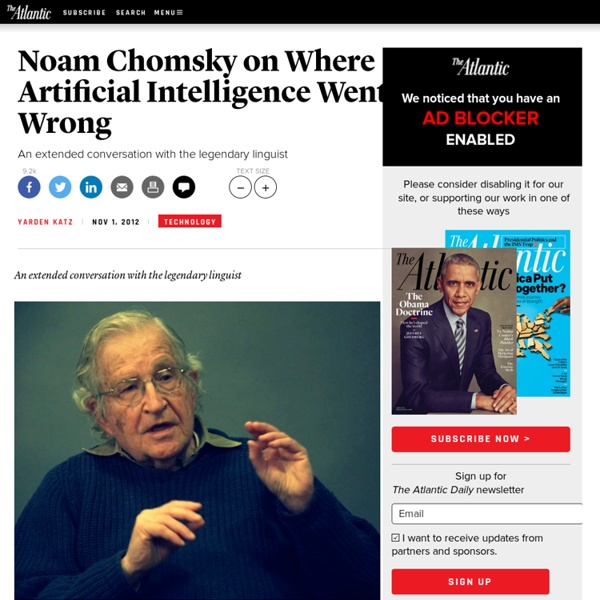 An extended conversation with the legendary linguist Graham Gordon Ramsay If one were to rank a list of civilization's greatest and most elusive intellectual challenges, the problem of "decoding" ourselves -- understanding the inner workings of our minds and our brains, and how the architecture of these elements is encoded in our genome -- would surely be at the top. Yet the diverse fields that took on this challenge, from philosophy and psychology to computer science and neuroscience, have been fraught with disagreement about the right approach. In 1956, the computer scientist John McCarthy coined the term "Artificial Intelligence" (AI) to describe the study of intelligence by implementing its essential features on a computer. Some of McCarthy's colleagues in neighboring departments, however, were more interested in how intelligence is implemented in humans (and other animals) first. Noam Chomsky, speaking in the symposium, wasn't so enthused. I want to start with a very basic question. Related:  articles

Why ‘Slacktivism’ Matters The following piece is a guest post. Read more about MediaShift guest posts here. We all have at least one social or political issue that gets our blood boiling. The question is whether it boils vigorously enough to incite action. Of course, the majority of us vent our frustrations about these issues at the water cooler and on social media, rather than marching in the streets. We create an echo chamber of like-minded people with whom we can openly share opinions and commiserate grievances. In April of 2014, hundreds of girls in Nigeria were kidnapped from their school by the militant group, Boko Haram. While the idea that a single post on social media could have an iota of impact on a global issue might sound absurd, it can actually be the catalyst for a successful awareness campaign given the right set of circumstances. SLACKTIVISM vs. I see Facebook as the most effective venue because it offers every tool needed to organize.

6 Things That Can Kill Your City's Startup Community Not every tech startup enjoys the luxury of launching in Silicon Valley — or Silicon Alley, or Austin, Texas, or another high-tech hotspot. What’s the solution? Instead of waiting for someone to offer a helping hand, or packing up the U-Haul and moving across the counryy, try taking the entrepreneurial approach and turning your home town into a high-tech startup community. Brad Feld author of Startup Communities: Building an Entrepreneurial Ecosystem in Your City, says it can be done. Feld, who has over 20 years of experience as both an entrepreneur and an early-stage investor, is a co-founder of tech accelerator TechStars and knows whereof he speaks. Too often, though, cities trying to build high-tech startup communities make one or more key mistakes that keep their plans from reaching fruition. 1. 2. 3. 4. 5. 6. See a common thread here?

Artificial Intelligence Depot What Ever Happened to the Pepsi Generation? | In the CEO Afterlife The concept of a Pepsi advertising campaign designed to capture America’s youth had its roots in the 1960’s. But it wasn’t until the 1980’s that “The Choice of a New Generation” struck 14-24 year olds like a social tsunami. Michael Jackson, the theme to “Billie Jean” and a phenomenal blend of marketing and entertainment drove the Pepsi brand to the pinnacle of contemporary culture. Coca-Cola was so taken aback by the success that they made a colossal error in judgment. They abandoned their century-old recipe and launched “New Coke”. The result was disastrous. Pundits attribute Coca-Cola’s rebound to the reintroduction of Coke Classic and better marketing and advertising. Make no mistake; the Pepsi-Cola brand is still big business. Did you like this?

New Innovative Services in Next Decade: IPv8 services Category:Artificial intelligence From Wikipedia, the free encyclopedia Subcategories This category has the following 32 subcategories, out of 32 total. Pages in category "Artificial intelligence" The following 200 pages are in this category, out of 256 total. (previous 200) (next 200)(previous 200) (next 200) Interview with Nick Hornby (Author of High Fidelity) February, 2015 English author and screenwriter Nick Hornby, perhaps best known for his autobiography Fever Pitch and his novels High Fidelity and About a Boy, returns to bookstores this month with Funny Girl, his first novel in over five years. Set in London in the mid-1960s, featuring a female protagonist who rejects a beauty queen title to instead pursue a career as a comedic television actor, Hornby's newest book captures a brief window of time in 20th century popular culture when over half of the U.K. would watch a hit TV show and the Beatles and Rolling Stones had yet to fully assert their dominance. With his usual humor, pop culture references, and enviable empathy, Hornby has created another cast of instantly memorable characters. Just before departing on his book tour, Hornby spoke with Goodreads Author J. Error rating book. Rate this book Clear rating Nick Hornby: I think anything I've ever done in movies has fed into this. GR: She's also very much her father's daughter. NH: Right. GR: Right.

The Lazy Person's Guide to a Happy Home: Tips for People Who (Really) Hate Cleaning I'm always a little ashamed to admit this, but I hate to clean. I really hate it. I mean, there are so many more interesting things I could be doing. And the annoying thing is that when you clean something, it just gets dirty all over again. I've been working at this for a while, and I've realized that "not caring about it" is not an effective solution. 1. 2. 3. 4. So if you dread cleaning (like me) because you're lazy but also sort of a crazy perfectionist and think everything has to be SUPER SUPER clean: it doesn't. 5. So drink a glass of wine while you wash the dishes. 6. I've experienced firsthand the difficulty of getting rid of things because I'm planning to sell my house soon, so I've been cleaning out bigtime. Even More Cleaning Tips for Lazy People: • How To Clean Your House in 20 Minutes a Day for 30 Days • How To Keep Your Bathroom Clean In 5 Minutes A Day • The Stress Free Plan: How To Clean House for a Party • Dirty Little Secrets of Tidy Families • "Tidy Time" vs.

la-ralit-augmente-au-bureau-ds-2014 - olivier-schmouker Publié le 02/11/2012 à 09:43, mis à jour le 08/11/2012 à 14:28 Notre regard sur le monde va changer... Photo: DR BLOGUE. La réalité augmentée, ça vous dit quelque chose? Sûrement. Découvrez mes précédents posts Artificial Intelligence After decades of start-and-stop, artificial intelligence is being advanced by major computing firms from Facebook and Google to IBM. In the left-... The James Martin 21st Century School at the University of Oxford in Oxford, England, founded in 2005, is more commonly known as the Oxford Martin... Social networks are capturing a phenomenal amount of data on their users. Suppose you're trying to navigate an unfamiliar section of a big city, and you're using a particular cluster of skyscrapers as a reference point.... Ipselex, a secretive Hong Kong artificial intelligence company, today announced the launch of its web platform. Jeff Hawkins has bet his reputation, fortune, and entire intellectual life on one idea: that he understands the brain well enough to create machines... We might soon be creating monsters, so we'd better figure out our duties to them.

In Praise of Melancholy and How It Enriches Our Capacity for Creativity by Maria Popova How the American obsession with happiness at the expense of sadness robs us of the capacity for a full life. “One feels as if one were lying bound hand and foot at the bottom of a deep dark well, utterly helpless,” Van Gogh wrote in one of his many letters expounding his mental anguish. And yet the very melancholy that afflicted him was also the impetus for the creative restlessness that sparked his legendary art. And yet the modern happiness industrial complex seems bent on eradicating this dark, uncomfortable, but creatively vitalizing state — something Eric G. With an eye toward the marketable ticker of bad news on which our commercial news media feed, Wilson writes: Our minds run over a daunting litany of global problems. Considering what lies behind our desire to eradicate sadness from our lives, Wilson admonishes that our obsession with happiness — something he considers a decidedly American export — “could well lead to a sudden extinction of the creative impulse.”