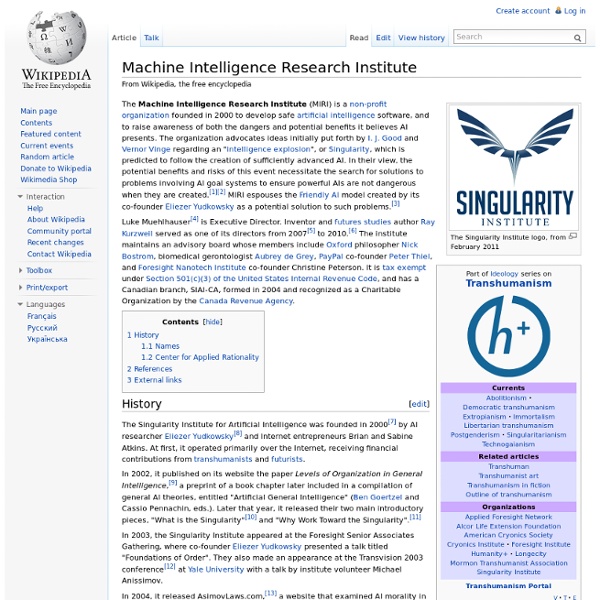 The Machine Intelligence Research Institute (MIRI) is a non-profit organization founded in 2000 to research safety issues related to the development of Strong AI. The organization advocates ideas initially put forth by I. J. Good and Vernor Vinge regarding an "intelligence explosion", or Singularity, which MIRI thinks may follow the creation of sufficiently advanced AI.[1] Research fellow Eliezer Yudkowsky coined the term Friendly AI to refer to a hypothetical super-intelligent AI that has a positive impact on humanity.[2] The organization has argued that to be "Friendly" a self-improving AI needs to be constructed in a transparent, robust, and stable way.[3] MIRI was formerly known as the Singularity Institute, and before that as the Singularity Institute for Artificial Intelligence. History[edit] In 2003, the Institute appeared at the Foresight Senior Associates Gathering, where co-founder Eliezer Yudkowsky presented a talk titled "Foundations of Order". Usefulness[edit] See also[edit] Related:  Superintelligence

Clarke's three laws Clarke's Three Laws are three "laws" of prediction formulated by the British science fiction writer Arthur C. Clarke. They are: When a distinguished but elderly scientist states that something is possible, he is almost certainly right. When he states that something is impossible, he is very probably wrong.The only way of discovering the limits of the possible is to venture a little way past them into the impossible.Any sufficiently advanced technology is indistinguishable from magic. Origins[edit] Clarke's First Law was proposed by Arthur C. The second law is offered as a simple observation in the same essay. The Third Law is the best known and most widely cited, and appears in Clarke's 1973 revision of "Hazards of Prophecy: The Failure of Imagination". A fourth law has been added to the canon, despite Sir Arthur Clarke's declared intention of not going one better than Sir Isaac Newton. Snowclones and variations of the third law[edit] and its contrapositive: See also[edit] References[edit]

Alvin Toffler Alvin Toffler (born October 4, 1928) is an American writer and futurist, known for his works discussing the digital revolution, communication revolution and technological singularity. He founded Toffler Associates, a management consulting company, and was a visiting scholar at the Russell Sage Foundation, visiting professor at Cornell University, faculty member of the New School for Social Research, a White House correspondent, an editor of Fortune magazine, and a business consultant.[3] Toffler is married to Heidi Toffler, also a writer and futurist. They live in the Bel Air section of Los Angeles, California, just north of Sunset Boulevard. The couple’s only child, Karen Toffler, (1954–2000), died at the age of 46 after more than a decade suffering from Guillain–Barré syndrome.[4][5] Early life and career[edit] Alvin Toffler was born in New York city in 1928. In the mid-’60s, the Tofflers began work on what would later become Future Shock.[6] His ideas[edit] Critical acclaim[edit]

Darpa sets out to make computers that teach themselves The Pentagon's blue-sky research agency is readying a nearly four-year project to boost artificial intelligence systems by building machines that can teach themselves -- while making it easier for ordinary schlubs like us to build them, too. When Darpa talks about artificial intelligence, it's not talking about modelling computers after the human brain. That path fell out of favour among computer scientists years ago as a means of creating artificial intelligence; we'd have to understand our own brains first before building a working artificial version of one. But the agency thinks we can build machines that learn and evolve, using algorithms -- "probabilistic programming" -- to parse through vast amounts of data and select the best of it. But building such machines remains really, really hard: The agency calls it "Herculean". It's no surprise the mad scientists are interested. The other question involves how to make computer-learning machines more predictable. Image: Darpa

Ray Kurzweil Raymond "Ray" Kurzweil (/ˈkɜrzwaɪl/ KURZ-wyl; born February 12, 1948) is an American author, computer scientist, inventor, futurist, and is a director of engineering at Google. Aside from futurology, he is involved in fields such as optical character recognition (OCR), text-to-speech synthesis, speech recognition technology, and electronic keyboard instruments. He has written books on health, artificial intelligence (AI), transhumanism, the technological singularity, and futurism. Kurzweil is a public advocate for the futurist and transhumanist movements, as has been displayed in his vast collection of public talks, wherein he has shared his primarily optimistic outlooks on life extension technologies and the future of nanotechnology, robotics, and biotechnology. Life, inventions, and business career[edit] Early life[edit] Ray Kurzweil grew up in the New York City borough of Queens. Kurzweil attended Martin Van Buren High School. Mid-life[edit] Later life[edit] Personal life[edit]

Promises and Perils on the Road to Superintelligence Global Brain / Image credit: mindcontrol.se In the 21st century, we are walking an important road. Our species is alone on this road and it has one destination: super-intelligence. The most forward-thinking visionaries of our species were able to get a vague glimpse of this destination in the early 20th century. One conversation on the ever accelerating progress of technology and changes in the mode of human life, which gives the appearance some essential singularity in the history of the race beyond which human affairs, as we know them, could not continue. For thinkers like Chardin, this vision was spiritual and religious; God using evolution to pull our species closer to our destiny. Today the philosophical debates of this vision have become more varied, but also more focused on model building and scientific prediction. It’s hard to make real sense of what this means. In contrast, today we can define the specific mechanisms that could realize a new world. Promise #1: Omniscience

Martin Börjesson (futuramb) On the hunt for universal intelligence How do you use a scientific method to measure the intelligence of a human being, an animal, a machine or an extra-terrestrial? So far this has not been possible, but a team of Spanish and Australian researchers have taken a first step towards this by presenting the foundations to be used as a basis for this method in the journal Artificial Intelligence, and have also put forward a new intelligence test. "We have developed an 'anytime' intelligence test, in other words a test that can be interrupted at any time, but that gives a more accurate idea of the intelligence of the test subject if there is a longer time available in which to carry it out", José Hernández-Orallo, a researcher at the Polytechnic University of Valencia (UPV), tells SINC. This is just one of the many determining factors of the universal intelligence test. The researcher, along with his colleague David L. Use in artificial intelligence Explore further: Ant colonies help evacuees in disaster zones

Mark Vickers (The Reticulum) Nick Bostrom’s Superintelligence and the metaphorical AI time bomb Frank Knight was an idiosyncratic economist who formalized a distinction between risk and uncertainty in his 1921 book Risk, Uncertainty, and Profit. As Knight saw it, an ever-changing world brings new opportunities, but also means we have imperfect knowledge of future events. According to Knight, risk applies to situations where we do not know the outcome of a given situation, but can accurately measure the odds. Uncertainty, on the other hand, applies to situations where we cannot know all the information we need in order to set accurate odds in the first place. “There is a fundamental distinction between the reward for taking a known risk and that for assuming a risk whose value itself is not known,” Knight wrote. A known risk is “easily converted into an effective certainty,” while “true uncertainty,” as Knight called it, is “not susceptible to measurement.” Sometimes, due to uncertainty, we react too little or too late, but sometimes we overreact. So what is superintelligence?