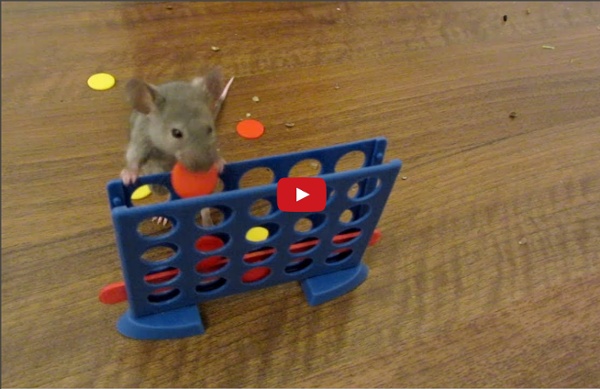 70 Amazing Examples of Street Art The attitude that art should be seen only in galleries is on its way out. This huge collection of creative street art will show you that city is probably the best canvas! Every wall, fence or column could be turned into an art piece. It brings smiles and raises eyebrows. It is closer to people than the best painting or installation shown in a art gallery. However, at the same time, bad street art can ruin a very nice downtown building making all neighborhoods seem run-down and uninviting. Now take a look at these 70 creative examples of street art. Tiny Mouse Climbing a Dandelion We've met the cutest kitten in the world and her equally adorable partner in crime, but this tiny harvest mouse on a dandelion rivals their cuteness! The photographer behind these pictures that just make you want to go "aww" is Matt Binstead, the head keeper of the British Wildlife Centre. Binstead, who only began snapping shots of the animals he works with in Summer 2009, says, "It was lovely to get these shots of the mouse in its element. I saw it on the stem and just waited for it to climb all the way to the top." Matt Binstead on FlickrMatt Binstead on 500px via [Enpundit, Matt's Photos, Daily Mail]

Researcher decodes prairie dog language, discovers they've been talking about us (Video) You might not think it to look at them, but prairie dogs and humans actually share an important commonality -- and it's not just their complex social structures, or their habit of standing up on two feet (aww, like people). As it turns out, prairie dogs actually have one of the most sophisticated forms of vocal communication in the natural world, really not so unlike our own. After more than 25 years of studying the calls of prairie dog in the field, one researcher managed to decode just what these animals are saying. According to Dr. And, when they're talking about humans, that might not always be flattering. "For example, a human alarm call not only contains information about the intruder being a human, but also contains information about the size, shape (thin or fat), and color of clothes the human is wearing," says Dr. Here's a remarkable video detailing what the researcher discovered: For more information on Dr.

Photographer waited in a river nightly for 4 years to get this singular shot of a beaver : TreeHugger Donning snorkeling gear and weights, Louis-Marie Preau would lie motionless on the riverbed for 2 to 3 hours a night waiting for the perfect photo. Suffice to say, photographers can be a bit obsessive. And wildly patient. Both of which are wonderfully, beautifully evident in this jaw-dropping photo of a Eurasian beaver fetching dinner in the Loire region of western France. WIth the unfortunate fate of having both fur and castoreum the subject of great lust for trappers, Eurasian beavers were nearly hunted to extinction by the middle of the 19th century. In France, the species (Castor fiber) was almost completely extinguished, save for a small population of about 100 individuals in the lower Rhone valley. Having grown up in the region, photographer Louis-Marie Preau spent a lucky childhood exploring nature and observing wildlife. Every night, wearing snorkeling gear and weights, he would lie still as a log on the riverbed for hours.

Jimmy Carter rabbit incident 1979 incident in which Jimmy Carter was attacked by a swamp rabbit April 20, 1979 White House photo of Carter and rabbit from the Carter Library The Jimmy Carter rabbit incident, sensationalized as a "killer rabbit attack" by the press, involved a swamp rabbit that swam toward then–U.S. President Jimmy Carter's fishing boat on April 20, 1979. Background[edit] President Carter was fishing in his hometown of Plains, Georgia on April 20, 1979, alone in a flat-bottomed boat while staff were on land nearby. When Carter returned to his office, his staff did not believe his story, saying rabbits could not swim, or that one would never approach a person threateningly.[2] A White House photographer took a picture of the incident, which was released by a later administration.[3] Media accounts and public perception[edit] Close up of rabbit cropped from White House photo In his 1986 book The Other Side of the Story, Powell recounted the story : See also[edit] References[edit]