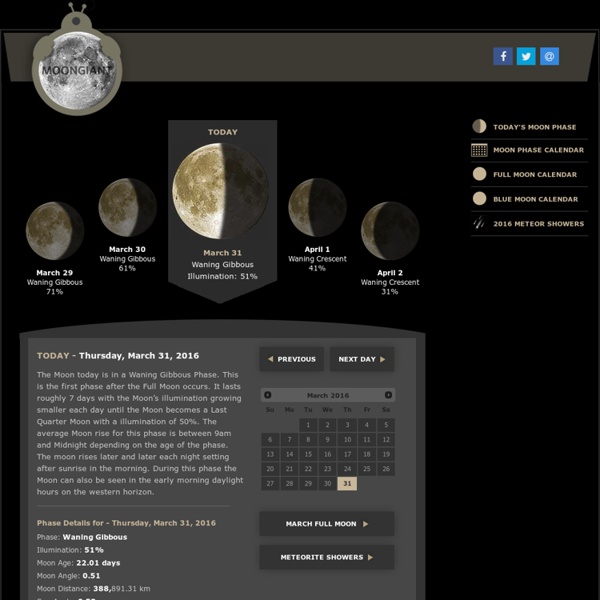 The Moon today is in a Waning Gibbous Phase. This is the first phase after the Full Moon occurs. It lasts roughly 7 days with the Moon’s illumination growing smaller each day until the Moon becomes a Last Quarter Moon with a illumination of 50%. The average Moon rise for this phase is between 9am and Midnight depending on the age of the phase. The moon rises later and later each night setting after sunrise in the morning. During this phase the Moon can also be seen in the early morning daylight hours on the western horizon. Phase: Waning GibbousIllumination: 92% Moon Age: 17.54 daysMoon Angle: 0.51Moon Distance: 392,125.92 kmSun Angle: 0.53Sun Distance: 149,764,642.22 km

Day and Night World Map +1 this page: Follow us on Google+: Like/share this page: Black Magic – The Bad and The Ugly 4th April 2016 By Claudia Ayaz Guest Writer for Wake Up World If the Moon Were Only 1 Pixel - A tediously accurate map of the solar system Mercury Venus Earth You Are Here Introduction to the Enneagram Copyright © Ewald Berkers The Enneagram system The Enneagram is a personality typing system that consists of nine different types. Everyone is considered to be one single type, although one can have traits belonging to other ones.

About Bruce Cathie Bruce Cathie Captain Bruce Cathie was born in 1930 in Auckland, New Zealand, and was educated at Otahuhu Technical College. On leaving school, he became an engineering apprentice, then joined the Royal New Zealand Air Force to train as a pilot. After completing his flying training, he spent three years in agricultural aviation. It was during that time in 1952, that with a group of friends, he made a prolonged evening sighting of a UFO at Mangere, Auckland.