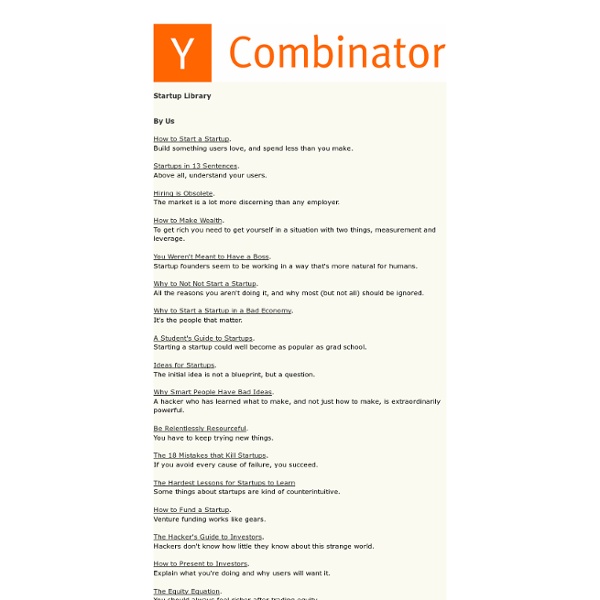 Instapaper Founder Marco Arment's Journey From Bagel Jockey to Publishing Pioneer Marco Arment started Instapaper, because he wanted to be able to read the Web pages he’d saved during the day on his train ride home. "A lot of people think that if you’re in a big city, you have [mobile connectivity] all the time," he laughs. The reality? So the co-founder of the micro-blogging service Tumblr put his considerable coding skills and a finely tuned sense of design and usability to work. The free-to-join bookmarking service is now available for the iPhone, iPad, and Kindle, and has been lauded by fans and reviewers alike. Ironically, now that he's working out of his home, Arment doesn’t have the commuting downtime that led him to build Instapaper in the first place. Funding: I’m intentionally not doing anything complicated with money. Cubicles and co-workers: Programmers work in bursts of productivity. Health insurance: It’s not cheap to insure yourself. Paywalls and micropayments: Micropayments are certainly an interesting idea, but not for me.

WorkHappy.net: killer resources for entrep Math Will Rock Your World Neal Goldman is a math entrepreneur. He works on Wall Street, where numbers rule. But he's focusing his analytic tools on a different realm altogether: the world of words. Goldman's startup, Inform Technologies LLC, is a robotic librarian. Every day it combs through thousands of press articles and blog posts in English. How do you convert written words into math? By the time you're reading these words, this very article will exist as a line in Goldman's polytope. The world is moving into a new age of numbers. From fledglings like Inform to tech powerhouses such as IBM (IBM), companies are hitching mathematics to business in ways that would have seemed fanciful even a few years ago. The rise of mathematics is heating up the job market for luminary quants, especially at the Internet powerhouses where new math grads land with six-figure salaries and rich stock deals. Math entrepreneurs, meanwhile, are raking in bonanzas. The Dark Side This industrial metamorphosis also has a dark side.

Guest Post by WetPaint CEO Ben Elowitz: How To Raise Venture Dollars Ben Elowitz has graciously agreed to a guest post. The timing is apropos since Ben just raised $25 million in the largest technology financing in Washington state this year. Wetpaint is the leader in social publishing with nearly one million hosted user-powered sites. They have recently made a very smart move by enabling their platform to be distributed (they call it ‘injected’) inside of any Web site. Since there is so much discussion around raising money (by entrepreneurs) combined with the lack of information available, we thought Ben’s insight would be pertinent and helpful to the startup community. For whatever cosmic reason, I cross paths with lots of early-stage entrepreneurs who are trying to figure out how to fund their startup. So what is my approach to getting the term sheet I want to sign? 1) Keep it exclusive. If you meet with too many firms you look desperate (trust me…word gets around); and as we all know, many of the very hottest companies meet with just a couple firms.

Startups in 13 Sentences February 2009 One of the things I always tell startups is a principle I learned from Paul Buchheit: it's better to make a few people really happy than to make a lot of people semi-happy. I was saying recently to a reporter that if I could only tell startups 10 things, this would be one of them. When I made the list there turned out to be 13: 1. Cofounders are for a startup what location is for real estate. 2. The reason to launch fast is not so much that it's critical to get your product to market early, but that you haven't really started working on it till you've launched. 3. This is the second half of launching fast. 4. You can envision the wealth created by a startup as a rectangle, where one side is the number of users and the other is how much you improve their lives. [2] The second dimension is the one you have most control over. 5. Ideally you want to make large numbers of users love you, but you can't expect to hit that right away. 6. Customers are used to being maltreated. 7.

What Exactly is a Business Model? Everyone in the tech world talks about business models. But I’ll bet that if you quizzed a random sample of these people, you’d find that they really don’t know what a business model is. I did just that with my students at UC-Berkeley. Most raised their hands, and MBA student Blake Brundidge’s attempt to answer the question was a valiant one—but none of them really had a clue. The only one who got the answer right was Lionel Vital, a Stanford student gatecrashing my iSchool class. The reality is that a business model is like the old saying about teenage sex: everyone talks about it all the time; everyone boasts about how well he or she is doing it; everyone thinks everyone else is doing it; almost no one really is; and the few who are are fumbling their way through it incompetently. I’ll tell you what a business model is, in case you are quizzed by your investors. But first, let me answer the big question that is surely on your mind: what is a Stanford student doing at Berkeley? 1. 2.

What Business Can Learn from Open Source August 2005 (This essay is derived from a talk at Oscon 2005.) Lately companies have been paying more attention to open source. Ten years ago there seemed a real danger Microsoft would extend its monopoly to servers. It seems safe to say now that open source has prevented that. A recent survey found 52% of companies are replacing Windows servers with Linux servers. [1] More significant, I think, is which 52% they are. But the biggest thing business has to learn from open source is not about Linux or Firefox, but about the forces that produced them. We may be able to get a fix on these underlying forces by triangulating from open source and blogging. Like open source, blogging is something people do themselves, for free, because they enjoy it. Another thing blogging and open source have in common is the Web. Amateurs I think the most important of the new principles business has to learn is that people work a lot harder on stuff they like. It's not that Microsoft isn't trying. Workplaces

The Power of the Marginal June 2006 (This essay is derived from talks at Usenix 2006 and Railsconf 2006.) A couple years ago my friend Trevor and I went to look at the Apple garage. That's one of California's hidden advantages: the mild climate means there's lots of marginal space. Some of Silicon Valley's most famous companies began in garages: Hewlett-Packard in 1938, Apple in 1976, Google in 1998. By conventional standards, Jobs and Wozniak were marginal people too. Outsiders Now a startup operating out of a garage in Silicon Valley would feel part of an exalted tradition, like the poet in his garret, or the painter who can't afford to heat his studio and thus has to wear a beret indoors. In 1976, everyone looked down on a company operating out of a garage, including the founders. They already had something few real companies ever have: a fabulously well designed product. It's an old idea that new things come from the margins. Insiders Maybe I got a little carried away with this example. Tests Anti-Tests Risk Focus

Y Combinator SWOT analysis A SWOT analysis, with its four elements in a 2×2 matrix. A SWOT analysis (alternatively SWOT matrix) is a structured planning method used to evaluate the strengths, weaknesses, opportunities and threats involved in a project or in a business venture. A SWOT analysis can be carried out for a product, place, industry or person. It involves specifying the objective of the business venture or project and identifying the internal and external factors that are favorable and unfavorable to achieve that objective. Some authors credit SWOT to Albert Humphrey, who led a convention at the Stanford Research Institute (now SRI International) in the 1960s and 1970s using data from Fortune 500 companies.[1][2] However, Humphrey himself does not claim the creation of SWOT, and the origins remain obscure. The degree to which the internal environment of the firm matches with the external environment is expressed by the concept of strategic fit. Matching and converting[edit] Use[edit] Strategy building[edit]

Steve Blank Why Startups Condense in America May 2006 (This essay is derived from a keynote at Xtech.) Startups happen in clusters. There are a lot of them in Silicon Valley and Boston, and few in Chicago or Miami. A country that wants startups will probably also have to reproduce whatever makes these clusters form. I've claimed that the recipe is a great university near a town smart people like. It is by no means a lost cause to try to create a silicon valley in another country. 1. For example, I doubt it would be possible to reproduce Silicon Valley in Japan, because one of Silicon Valley's most distinctive features is immigration. A silicon valley has to be a mecca for the smart and the ambitious, and you can't have a mecca if you don't let people into it. Of course, it's not saying much that America is more open to immigration than Japan. 2. I could see India one day producing a rival to Silicon Valley. In poor countries, things we take for granted are missing. The US has never been so poor as some countries are now. 3. 4. 5. 6.

Grazr 2.0, One-Stop Shopping for All Your OPML Needs? - Profy.Co According to the creators of Grazr (which came onto the market in March 2006), it is a “free and easy way to gather and organize information from all over the Web. Use our drag and drop editor to collect feeds and links to Web pages, and then share them with others on this site, or place them on your own pages with our free widget.” In addition, it has the ability to read twitters . “The Grazr Twitter Reader is the first tool that makes it easy to browse a social graph starting with any individual Twitter user.” Being a huge believer in the power of Twitter, Grazr had found the magic words to get my attention. So let us go under the hood and see if it can deliver. Personal Observations Once I logged in and began to prowl around Grazr, my attention immediately focused on the header, MY Reading Lists . As noted prior, Grazr is for all your OPML needs and that is where I ran into problems. Adam Green (CEO of Grazr Corp) responds Additional Features A Glimpse into the Future Conclusion

A Scary Line Has Been Crossed For VCs At a recent presentation at Harvard Business School, Adeo Ressi argued that the VC model is broken. That is nothing new for Ressi, who is the founder of the VC-rating site theFunded. He is kind of like the Nick Denton of the VC world, always saying that the sky is falling. The slides from his presentation are embedded below, but really all you need to look at is the one above. The big institutional investors who tend to put the most money into venture funds as limited partners are hurting right now. When the lines cross over again, we can all relax.