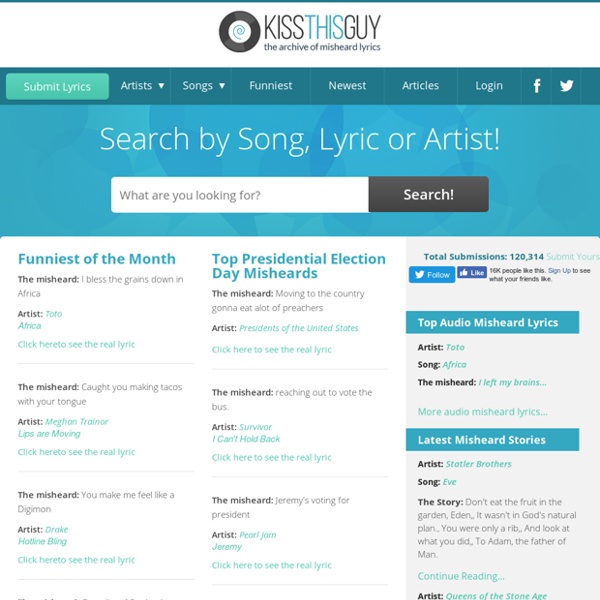 1) Paul McCartney Uncle Albert/Admiral Halsey "Lid oh lid oh be a gypsy, get around , (get around),, Get your feet up off the ground,, So t Click here to see the real lyric 2) Monkees (Theme From) The Monkees

About the Virtual Choir – Eric Whitacre's Virtual Choir The Virtual Choir is a global phenomenon, creating a user-generated choir that brings together singers from around the world and their love of music in a new way through the use of technology. Singers record and upload their videos from locations all over the world. Each one of the videos is then synchronised and combined into one single performance to create the Virtual Choir.

How classrooms look around the world — in 15 amazing photographs To mark last month’s World Teachers’ Day (sponsored by UNESCO , the United Nations Educational, Scientific and Cultural Organization), photographers from Reuters took pictures around the world of educators with their students in a telling exhibit of the very different circumstances under which children attend school. Here are 15 pictures taken by Reuters photographers, revealing the spectrum of “classrooms” — from those with literally no resources to those well-stocked and housed. Teacher Mahajera Armani and her class of girls pose for a picture at their study open area, founded by Bangladesh Rural Advancement Committee (BRAC), outside Jalalabad city, Afghanistan September 19, 2015. 12 Old-Fashioned Insults We Should Bring Back With the help of social media, slang words and phrases can gain momentum around the globe in what feels like mere minutes. But trendy terms were making splashes long before YouTubers were stanning guyliner-wearing pop stars who slay all day and woke Gen Z-ers were tweeting their hot takes about fake news, mansplaining, and more. In a new study, digital subscription service Readly analyzed data from its magazine archives to identify some popular terms from years past and present and pinpoint exactly when they stopped appearing in print.

International Society of Musicians for Artwhistling Performed whistling is not a new idea, but its role has been rather limited. Since the days of music hall & vaudeville, it has rarely ventured beyond imitating singing or birds, while appreciated chiefly in terms of novelty. Finally in the 1990s, a few individuals began to coalesce around a different model — one based on the music community at large and how all instruments are approached. By adapting the same attitude toward our own whistling, many have discovered much broader possibilities. 30 Of The Most Powerful Images Ever A picture is worth a thousand words, but not all pictures are created equal. These pictures are powerful. They are gripping and unforgettable because of the volumes they speak about the human condition – about some of the best and worst moments of contemporary human existence. We should warn our readers that some of these pictures may upset them, while others may fill them with joy. But that’s precisely because these images reflect some of the best and worst parts of the human experience and world events. Our post of must-see photos from the past described our history while these photos, for the most part, describe our present – our suffering and our triumphs, our perseverance and our failures, our compassion and our hatred, our intelligence and our stupidity.

This Is Why VSCO Girls Keep Saying "Sksksksk" Imagine walking in on this conversation: "And then I dropped my Hydro Flask." "Sksksksksk." Boil the Frog Boil the Frog lets you create a playlist of songs that gradually takes you from one music style to another. It's like the proverbial frog in the pot of water. If you heat up the pot slowly enough, the frog will never notice that he's being made into a stew and jump out of the pot. With a Boil the frog playlist you can do the same, but with music. You can generate a playlist that will take the listener from one style of music to the other, without the listener ever noticing that they are being made into a stew. How does it work?

360 FREE Warmers, Ice-Breakers and Fillers For The ESL Classroom Planning a lesson is no easy task, especially if you're about to introduce a difficult topic. Sometimes, you need a little bit of something extra to really make your lesson flow. For this reason, ESL teachers usually use warmers and fillers. Warmers are used in lessons to ease the students into the topic you're going to present. Along the same lines, fillers are used to reinforce topics or follow up with extra practice for students. 14 Latin Words and Phrases for the Modern World You don’t have to know the precise grammar rule behind the sentence Me went to the store to know that it’s wrong—but you probably learned it in school, even if you don’t remember it. Object pronouns like me can’t be used as subjects; it should be the subject pronoun I. In other cases, you probably don’t even realize that there is a grammatical explanation behind why a certain sentence or phrase sounds wrong. Big, red machine sounds much better than Red, big machine, right? As Inc. reports, that’s because we automatically use adjectives in a really specific order. In his lovely, rectangular book The Elements of Eloquence, Mark Forsyth illustrates that order with this example: Lovely little old rectangular green French silver whittling knife.

A comeback for the humble cassette? - Features - Music - The Independent His nonplussed response was delightful. We were witnessing the obsolescence of technology at first hand, right there; as we explained how it worked it almost felt like we were experts on an episode of Antiques Roadshow. (Although sadly in the item in question was worth almost nothing.) Two brothers, Benny and Rafi Fine, have seen the viral potential of this kind of thing, and have recently started a series on YouTube called Kids React To Technology. Their latest film features the baffled responses of a group of children to the Sony Walkman; the cassette format makes virtually no sense to them, and it's not hard to see why. While vinyl has experienced a hipster resurgence in popularity – 780,000 albums were sold last year, the highest tally since 1997 – the cassette, with its stern instructions to "spool to end of tape before playing other side", looks hilariously retro.

The 50 most useful Idioms and their Meaning - A list on 1 page Commonly used Idioms Idiom: a manner of speaking that is natural to native speakers of a language Every language has its own collection of wise sayings. They offer advice about how to live and also transfer some underlying ideas, principles and values of a given culture / society. These sayings are called "idioms" - or proverbs if they are longer. The Phaistos Disk Bears a 4,000-Year-Old Message That No One Can Translate Whatever the meaning of the disk, there's one insight derived from the writing that we found incredibly interesting. In "Guns, Germs, and Steel," Jared Diamond points out how whether a technological innovation changes the world or not can depend entirely on its context. In a very real sense, the Phaistos disk is the earliest known example of movable type. But without other technological innovations, it simply didn't have the chance to take off.