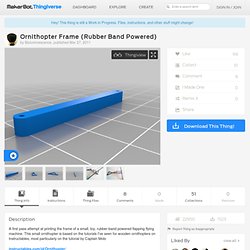 This small ornithopter is based on the tutorials I've seen for wooden ornithopters on Instructables, most particularly on the tutorial by Captain Molo. Crank Mechanism to Download and Make. Become a Member for free access to this and other files on the site. See the Membership page for more details. Already a Member? Log in Here A working crank mechanism to download, print out and experiment with! The completed model. Print out the parts onto thin card (230 gsm / 230 micron). Fold the push rod ends in half and glue them together to make double thickness card. ...then cut out the part with a pair of scissors. Repeat with the second push rod end. Make the Fuselage. Ornithopter. Make it « Rubber-Power.com. No experience necessary if working from a kit. 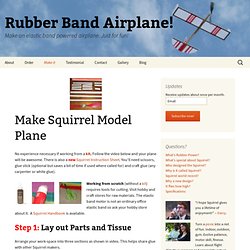 Follow the video below and your plane will be awesome. There is also a new Squirrel Instruction Sheet. You’ll need scissors, glue stick (optional but saves a bit of time if used where called for) and craft glue (any carpenter or white glue). Working from scratch (without a kit) requires tools for cutting. Visit hobby and craft stores for raw materials. Step 1: Lay out Parts and Tissue Arrange your work-space into three sections as shown in video. Section 1 (furthest from you): Drinks, parts, glue and scissors. Rubber band powered ornithopter 2. Weekend Project: Build an Ornithopter. Bird Flight. Welcome to Bird Flight! 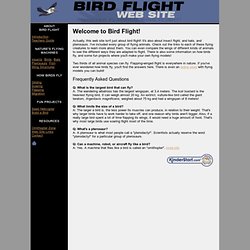 Actually, this web site isn't just about bird flight! It's also about insect flight, and bats, and pterosaurs. I've included every group of flying animals. Check out the links to each of these flying creatures to learn more about them. You can even compare the wings of different kinds of animals to see the different ways they are adapted to flight.

Two thirds of all animal species can fly. Frequently Asked Questions Q: What is the largest bird that can fly? Q: What limits the size of a bird? November 2009. Justin Miller -- a fan of The Automata / Automaton Blog and collector of Black Forest clocks -- recently added a rare clock to his collection. 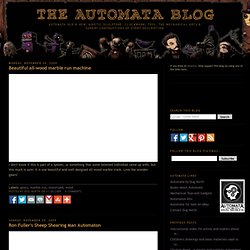 He has been kind enough to share the piece with us. Made circa 1870 in the Black Forest, the clock features a drinking king automaton figure. Every 10 minutes or on demand the king comes to life.The automaton's sequence of movement is as follows: 1 - The king's left arm holds a large beer. Paper Engeneering by ClockworkRobot. Vertical Wind Turbine . 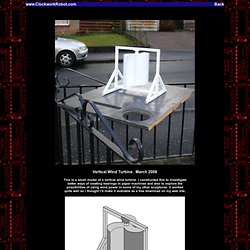 March 2008 This is a small model of a vertical wind turbine. I constructed this to investigate better ways of creating bearings in paper machines and also to explore the possibilities of using wind power in some of my other sculptures. It worked quite well so I thought I'd make it available as a free download on my web site. I've added a 3 bladed turbine to the download so you can compair the efficiency of the 2 designs. If you've got a pair of 3D glasses you may like to try the image above. Geometric Toy. ‪Chaîne de MechanicalSculptor‬‏ How to make a portable handy lie detector in Altoid tin. Mass producing LED powering wind turbines in a kids workshop. The Junior Wind Turbine project. 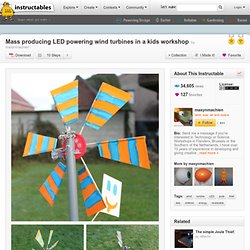 For my latest workshop in my daughter’s school I wanted to let the children each make a wind turbine. It wanted it to be functional, powering a small light and it needed to be cheaper than 6 Euro a piece, which ruled out any commercial kits. The workshop was for 20 kids, which ruled out scavenging hard discs motors or stepper motors and such. Low cost “toy” motors on the other hand need really high rpm to light up a small bulb or a led. Fortunately the type of motors used in solar cell driven toys and kits work better. Theo Jansen style robot leg: prototypes #4 and #5. Continuing where I left off (after a stiff binary interruption)... This picture compares prototype #2 with an angled profile version: The angled "L-profile" introduces a new property in the design: chirality.

All of a sudden, it matters which direction you want to fold the joints. Compare the symmetric #2 on the right: I decide to go with a "T-profile" and defer the hard choices by enlarging the surface area considerably. Here is one early version of the T profiled model. Jansen Mechanism. Paper Engineering Kinetic Mechanical Sculpture Brand Identity Design Branding / Identity / Design. Not sure what to write about this post – its kinetic origami engineering pop-up packaging design work mostly done with paper; all pretty darn amazing. 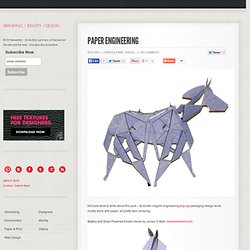 Battery and Solar Powered Kinetic Horse by James G Watt. clockworkrobot.com Faltjahr 2010 Design by Johann Volkmer Penny Shooter Business Card A card the size of a standard business card in which you can load 10 US pennies and fire them off in rapid succession. For more info and links to the design files if you want to build your own visit cardnetics.com.

How to Make Rolling Ball Sculpture. Upcycle your old PC fans into mini wind generators. Assembly of the Quick Cardapult. Cardapult, Quicker and Easier Method. A lot of people have been making my business card catapult as just a fun little toy to play with and don't really need it to look clean and pretty. 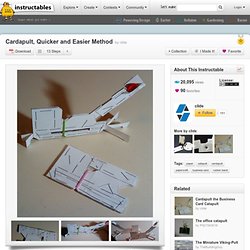 It can also sometimes be difficult to glue the cards together well enough that they don't fall apart. For this reason I have made a simplified construction method that needs less tools and time. This method also makes the card a little more durable and forgiving to abuse. The downside is that it is not as attractive as the original method. This one can easily be made in less than an hour.