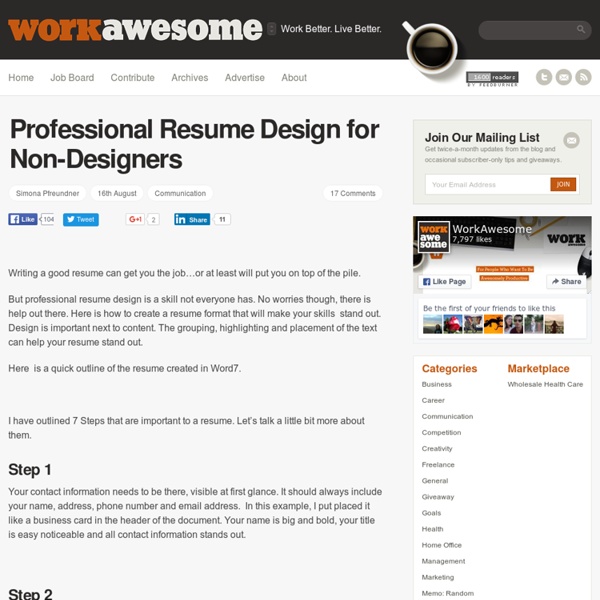 Writing a good resume can get you the job…or at least will put you on top of the pile. But professional resume design is a skill not everyone has. No worries though, there is help out there. Here is a quick outline of the resume created in Word7. I have outlined 7 Steps that are important to a resume. Step 1 Your contact information needs to be there, visible at first glance. Step 2 Your resume should rarely be more than one page. Step 3 The first paragraph should include a brief description of your current qualifications. Step 4 Let’s add the Work Experience or Employment History. Step 5 Next step is to add the education. Step 6 The last step is to add your skills. Step 7 I like to add the contact information again at the bottom, smaller but noticeable. Now you have a resume that should stand out among the rest. ContrastRepetitionAlignmentProximity In this specific example, we applied this formula. Lastly, proofread everything until your resume has no mistakes and you should be good to go.

15 graphic design interview tips The following interview advice for graphic designers was written by Lee Newham of Good People, former design director at London-based Davies Hall. 15 graphic design interview tips When you arrive in the interview give us your business card. It should be well designed, memorable, simple and hopefully have a great idea. Update: 08 June 2010 Lee left a comment to expand upon his last tip. Further resources: Image via Thinkstock Geometry: Circles - Math for Morons Like Us As of July 1, 2013 ThinkQuest has been discontinued. We would like to thank everyone for being a part of the ThinkQuest global community: Students - For your limitless creativity and innovation, which inspires us all. Teachers - For your passion in guiding students on their quest. Partners - For your unwavering support and evangelism. Parents - For supporting the use of technology not only as an instrument of learning, but as a means of creating knowledge. We encourage everyone to continue to “Think, Create and Collaborate,” unleashing the power of technology to teach, share, and inspire. Best wishes, The Oracle Education Foundation

Geometric Tattoos | theddi Peter Aurisch is a tattoo master from Berlin. Using a great mix of geometry lines and bold and fine colors Peter is definitely standing out with his tattoo style. Do you maybe plan to make another tattoo this summer? 71 Things You Can Do by Scott Hughes Most people aren't Warriors, and I'm fine with it. Most people do things that don't make sense, and I'm fine with it. I've learned to accept the non-sense that fills this world. (Part of being a Warrior is accepting that most other people are not Warriors, and accepting them.) For example, lazy people often whine that they don't make more money. Granted, sometimes when something bad happens to a person it's purely bad luck. However, usually when you don't like what's happening in your life, it's your own damn fault. In the following, I list 71 things that you can do to be more successful. Stop watching television. Extras: Don't be camera shy. Suggestions from visitors: Say "I love you" often to the people you feel this way about.Always turning off lights when leaving a room, unless of course there are others are in the room. Know any more things you want added to this list? Member Selected Amazon Books Discuss this page at the Warrior Forums.

Christmas Lights in 8 Bedrooms - wave avenue Posted by rd on Thursday, November 3, 2011 · Countdown begins before Christmas! And timely enough I’ve found these beautiful Christmas lights adorned bedrooms. They are so lovely I can’t stand it! Here’s a few discoveries, hope it inspires you! [source: one, two, three, four, five, six, seven, eight] Places to see at least once in life They say there are places in this world that anyone should see them at least once in life. Although we want each of you to go see them live, and we offer in the form of photos below. If I had to redo the path for real, the steps you would wear in Norway in Greece, Iceland, Netherlands, Croatia, China and Bora Bora. Whether it will attract the ocean or dream of green forests and endless, fascinating places of the world is waiting to delight. Preachers Rock, Preikestolen, Norway Zakynthos Island, Greece Skaftafeli, Iceland Plitvice Lakes, Croatia Lakes Jiuzhaigou, China Hotel Four Seasons Bora Bora Paterswolde Meer, a lake south of Groningen, Netherlands Marble caves, Chile Chico, Chile Marqueyssac gardens, Dordogne, France Greenland Capilano suspension bridge, Vancouver, Canada Valley of the Ten Peaks, Moraine Lake, Alberta, Canada Multnomah Falls, Oregon, USA Seljalandsfoss Waterfall, south coast of Iceland Labels: Places to see at least once in life Alesund, Norway Colorado Plateau, Arizona, USA

Relationship Rules Human beings crave intimacy, need to love and be loved. Yet people have much trouble doing so. It's clear from the many letters I get that lots of folks have no idea what a healthy relationship even looks like. From many sources and many experts, I have culled some basic rules of relationships. Choose a partner wisely and well. 20 abandoned places in the world | openingintro Source: linkMirny Mine is a former open pit diamond mine located in Mirny, Eastern Siberia, Russia Villa Epecuén was a tourist village located in the Buenos Aires Province of Argentina El Hotel del Salto in Colombia The abandoned flats in Keelung, Taiwan House of the Bulgarian Communist Party Abandoned mill in Sorrento, Italy Craco is an abandoned comune and medieval village in Italy Abandoned train depot in Czestochowa-Poland Spree Park, Berlin, Germany Gulliver’s Travels Park, Kawaguchi, Japan Dadipark Dadizel, Belgium Holland Island in the Chesapeake Bay Pripyat, Ukraine Christ of the Abyss at San Fruttuoso, Italy Hashima Island, Japan Château Miranda or Château de Noisy, Celles, Belgium Kasteel van Mesen, Lede, Belgium Nara Dreamland in Japan The Ryugyong Hotel in Pyongyang, North Korea City Hall Subway Station, NYC Share and Enjoy