Nano-ribbon implant produces enough electricity to power internal devices. Jan 23, 2014 nano-ribbon implant produces enough electricity to power internal devices nano-ribbon implant produces enough energy to power internal devicesthin, flexible mechanical energy harvester, with rectifier and microbattery, mounted on the bovine heartimage courtesy university of illinois and university of arizona according to phys.org, researchers from several institutions and universities from around the world have worked together to develop a piezoelectric device that when implanted into the body onto a constantly moving organ, is able to produce enough electricity to run a pacemaker or other implantable device. in a paper published by the national academy of sciences, the team describes the nature of their device and how it might be used in the future: 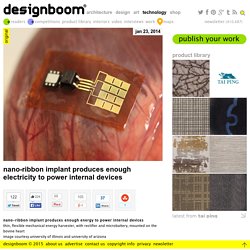 Self-charging battery gets boost from nanocomposite film. (TechXplore) —In 2012, a research team at the Georgia Institute of Technology led by Professor Zhong Lin Wang fabricated the first self-charging power pack, or battery, that can be charged without being plugged into a wall socket or other source of electricity. 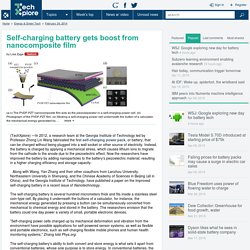 Instead, the battery is charged by applying a mechanical stress, which causes lithium ions to migrate from the cathode to the anode due to the piezoelectric effect. Now the researchers have improved the battery by adding nanoparticles to the battery's piezoelectric material, resulting in a higher charging efficiency and storage capacity. Along with Wang, Yan Zhang and their other coauthors from Lanzhou University, Northeastern University in Shenyang, and the Chinese Academy of Sciences in Beijing (all in China), and the Georgia Institute of Technology, have published a paper on the improved self-charging battery in a recent issue of Nanotechnology. 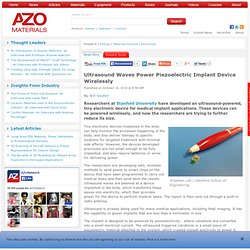 However, the devices developed previously are not small enough to be fully implanted, and also require batteries or wires for delivering power. The researchers are developing safe, wireless methods to send power to smart chips on the device that have been programmed to carry out medical tasks and then send back the results. Ultrasound waves are beamed at a device implanted in the body, which transforms these waves into electricity, which then provides power for the device to perform medical tasks. Ultrasound is already being used for many medical applications, including fetal imaging. 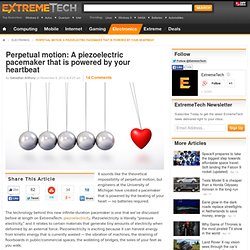 The technology behind this new infinite-duration pacemaker is one that we’ve discussed before at length on ExtremeTech: piezoelectricity. Piezoelectricity is literally “pressure electricity,” and it relates to certain materials that generate tiny amounts of electricity when deformed by an external force. Nanoribbon Piezoelectric Device. Federation of British Aquatic Societies. There are many other fish that can produce very strong electricity, enough to shock even larger fish. 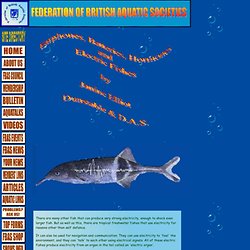 But as well as this, there are tropical freshwater fishes that use electricity for reasons other than self defence. It can also be used for navigation and communication. Berkeley Trains "Harmless" Viruses to Harvest Human Kinetic Energy. M13 viruses emerging from an E. 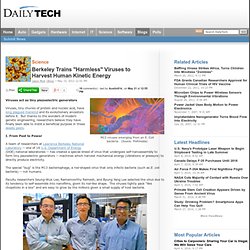 Coli bacteria. (Source: Profimedia) Viruses act as tiny piezoelectric generators Viruses, tiny chunks of protein and nucleic acid, have long plagued mankind and its evolutionary ancestors before it. But thanks to the wonders of modern genetic engineering, researchers believe they have finally been able to instill a beneficial purpose in these deadly pests. I. A team of researchers at Lawrence Berkeley National Laboratory -- one of 16 U.S. The special "bug" is the M13 bacteriophage, a rod-shaped virus that only infects bacteria (such as E. coli bacteria) -- not humans. 3/1/12 - 4/1/12. Quantum plasmons demonstrated in atomic-scale nanoparticlesPositive identification of plasmons in nano particles could open new engineering possibilities at the nanoscale The physical phenomenon of plasmon resonances in small metal particles has been used for centuries. 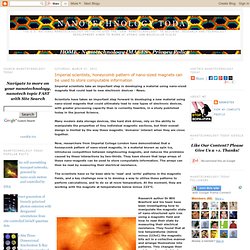 They are visible in the vibrant hues of the great stained-glass windows of the world. More recently, plasmon resonances have been used by engineers to develop new, light-activated cancer treatments and to enhance light absorption in photovoltaics and photocatalysis. "The stained-glass windows of Notre Dame Cathedral and Stanford Chapel derive their color from metal nanoparticles embedded in the glass. When the windows are illuminated, the nanoparticles scatter specific colors depending on the particle's size and geometry " said Jennifer Dionne, an assistant professor of materials science and engineering at Stanford and the senior author of a new paper on plasmon resonances to be published in the journal Nature.

Monitor: Let’s have a heart-to-heart. Power is just a heartbeat away. Turning the human body into a power station sounds like a zany plotline from the Matrix movies, but scientists are starting to take seriously the idea that one way to stem climate change might be to harvest tiny amounts of energy in the form of the body’s heat, movement, metabolism and vibrations. 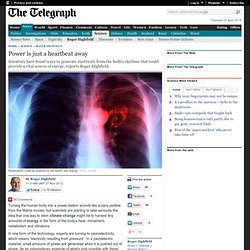 In one form of the technology, experts are turning to piezoelectricity, which means “electricity resulting from pressure”. In a piezoelectric material, small amounts of power are generated when it is pushed out of shape. As an extraordinary example of what’s now possible with these materials, the heart itself could be used to power an artificial pacemaker. 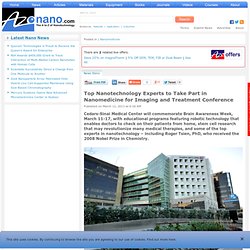 Brainworks (for 7th- and 8th-graders) - Robotic technology that enables doctors to check on their patients from home, 2. Introduction to the World of Stem Cells (for high school students) - Stem cell research that may revolutionize many medical therapies, and 3. Nanomedicine for Imaging and Treatment Conference - Some of the top experts in nanotechnology (medical professionals). Brainworks, 10 a.m. to 1:10 p.m., March 11, Harvey Morse Auditorium A robotic assistant will be a special guest at the Brainworks program for 130 seventh- and eighth-graders. The InTouch Health RP-7i robot enables several doctors to teleconference, bringing them together by “remote presence” to collaborate in the Critical Care Unit.

New device detects bacteria`s presence within minutes. London: Researchers at EPFL have built a matchbox-sized device that can test the presence of bacteria in a couple of minutes, instead of up to several weeks. A nano-lever vibrates in the presence of bacterial activity, while a laser reads the vibration and translates it into an electrical signal that can be easily read-the absence of a signal signifies the absence of bacteria. The method would make it quick and easy to determine if a bacteria has been effectively treated by an antibiotic, a crucial medical tool especially for resistant strains. Easily used in clinics, it could also prove useful for testing chemotherapy treatment. "This method is fast and accurate. And it can be a precious tool for both doctors looking for the right dosage of antibiotics and for researchers to determine which treatments are the most effective," explains Giovanni Dietler. 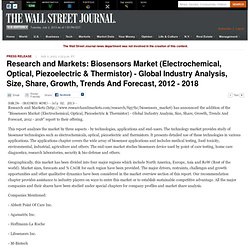 This report analyses the market by three aspects - by technologies, applications and end-users. The technology market provides study of biosensor technologies such as electrochemicals, optical, piezoelectric and thermistors. It presents detailed use of these technologies in various applications.