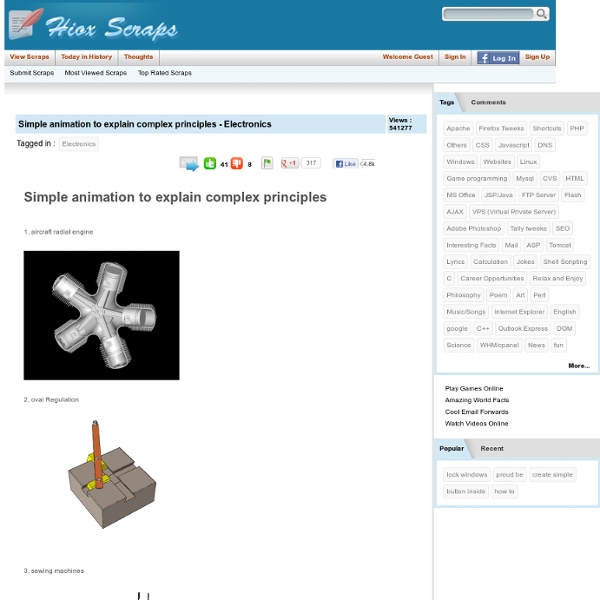 Washit cleans you and your clothes simultaneously The final concept art for Washit - a combined shower and washing machine - shows both domestic and public use Image Gallery (4 images) Water is a precious resource and in places like Australia and the U.K., the onset of summer coincides with restrictions on water use – hosepipes for watering gardens are banned, and showers are recommended over baths. But even taking a shower uses a fair amount of water, which all ends up down the drain.

Science News: Nanoguitar Photo by D. Carr and H. Craighead, Cornell. 5 Ways To Hack Your Brain Into Awesomeness Much of the brain is still mysterious to modern science, possibly because modern science itself is using brains to analyze it. There are probably secrets the brain simply doesn't want us to know. But by no means should that stop us from tinkering around in there, using somewhat questionable and possibly dangerous techniques to make our brains do what we want.

Congo research - Boost Your WiFi Signal Using Only a Beer Can : Discovery Channel I love a good hack, especially one that requires me to throw back a cold one before hand (or during). This simple wifi boost has actually been shown to increase signal strength by at least 2 to 4 bars. And, well, I will drink to that. These instructions came to us via WikiHow and we think they are most definitely worth checking out. But here is the most important question: what kind of beer will you use? 2012 James Dyson Award winner announced Dan Watson's SafetyNet, which lets juvenile and non-target fish escape commercial fishing nets, has taken out the 2012 James Dyson Award For the past month, the judges have been casting a discerning eye over the 15 finalists of the 2012 James Dyson Award and they’ve now made what no doubt was a difficult decision. Taking out the major prize is Dan Watson, who will receive £10,000 (US$16,000) for his SafetyNet system that tackles the problem of overfishing by providing escape exits for juvenile and non-target fish caught up in commercial fishing nets. Watson is a graduate of the Royal College of Art in the U.K, which will also receive £10,000 (US$16,000) as a result of him taking the top honors.

First 3D Map of the Brain’s Connections We knew anatomy could be gorgeous, but this is beyond anything else we’ve ever seen, and it’s guaranteed to be something you haven’t seen, being the first 3D image of a brain’s connections. Van Wedeen, a Harvard radiology professor, is awestruck: “We’ve never really seen the brain – it’s been hiding in plain sight.” Conventional scanning has offered us a crude glimpse, but scientists such as Wedeen aim to produce the first ever three-dimensional map of all its neurons. They call this circuit diagram the “connectome”, and it could help us better understand everything from imagination and language to the miswirings that cause mental illness. But with 100 billion neurons hooked together by more connections than there are stars in the MilkyWay, the brain is a challenge that represents petabyte-level data. Photographed above is the 3D image of an owl-monkey’s brain.

30 Books I'm Glad I Read Before 30 In various ways, these 30 books convey some of the philosophy of how Angel and I live our lives. I honestly credit a fraction of who I am today to each title. Thus, they have indirectly influenced much of what I write about on this site. A medley of both fiction and nonfiction, these great reads challenged my internal status quo, opening my mind to new ideas and opportunities, and together they gave me a basic framework for living, loving, learning and working successfully. If you haven’t read these books yet, I highly recommend doing so. They will enrich your library and your life. Zapatas outrageous, US&36;6,600 Flyboard - Aquaman meets Iron Man -... The Zapata Flyboard: Aquaman meets Iron Man Image Gallery (34 images) We don't think Franky Zapata knows what's about to hit him. The French jet ski champion has just put together an absolutely insane leisure product, released a short video about it - and then took off on honeymoon, where presumably he's having about the least romantic getaway of his life as his phone and email inbox go absolutely bananas. And here it is: the Zapata Flyboard. This ingenious and deceptively simple device bolts on to the powerful motor of a jet ski, then routes the resulting water jet through a long hose that connects to a pair of jet boots and hand-held stabilizers.