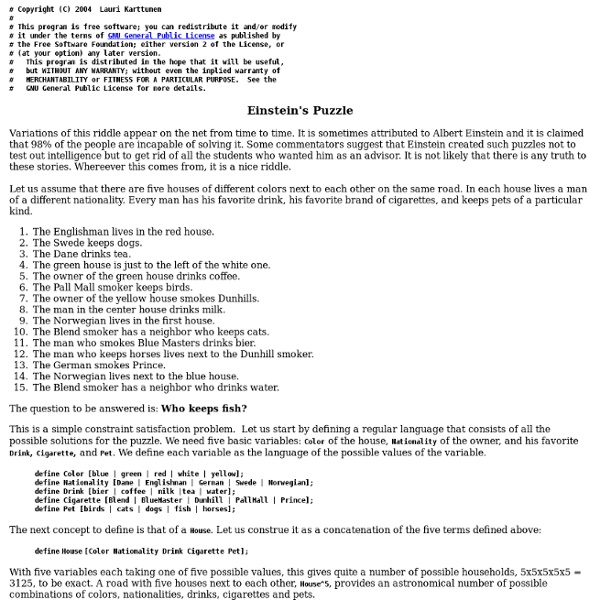 # Copyright (C) 2004 Lauri Karttunen # # This program is free software; you can redistribute it and/or modify # it under the terms of GNU General Public License as published by # the Free Software Foundation; either version 2 of the License, or # (at your option) any later version. # This program is distributed in the hope that it will be useful, # but WITHOUT ANY WARRANTY; without even the implied warranty of # MERCHANTABILITY or FITNESS FOR A PARTICULAR PURPOSE. See the # GNU General Public License for more details. Einstein's Puzzle Variations of this riddle appear on the net from time to time. It is sometimes attributed to Albert Einstein and it is claimed that 98% of the people are incapable of solving it. Some commentators suggest that Einstein created such puzzles not to test out intelligence but to get rid of all the students who wanted him as an advisor. Let us assume that there are five houses of different colors next to each other on the same road. Related:  Self Actualisation

News - Is it good for people to fail occasionally? 2 March 2014Last updated at 19:47 ET By Lucy Wallis BBC News In our highly competitive world, we prize success and hate it when things go wrong, but is there actually a value in failing? When Irish author Flann O'Brien submitted the manuscript for his second book, The Third Policeman, to a London publisher in 1940 it was rejected. But rather than admit this lack of success to his friends, he pretended the manuscript had accidentally blown out of the boot of his car on a trip to Donegal and had been lost forever. "This was a ruinous thing to say because he couldn't then turn around and say, 'Oh I've found it again,' so the manuscript sat very openly on his sideboard until his death," says Booker Prize-winning author Anne Enright. "The year after [O'Brien's] death, his wife got it published to a keen reception." If O'Brien had been more open about his failure to get the book printed, he might have seen his work published within his lifetime. Continue reading the main story “Start Quote

free university lectures - computer science, mathematics, physics, chemistry Whether your goal is to earn a promotion, graduate at the top of your class, or just accelerate your life, lectures can help get you there. Our archives of lectures cover a huge range of topics and have all been handpicked and carefully designed by experienced instructors throughout the world who are dedicated to helping you take the next step toward meeting your career goals. Lifelong learns can turn their free time turn into self-improvement time. The online lectures on this list are more than lecture notes or a slideshow on a topic -- they were designed for audiences like you, with carefully sequenced themes and topics taught by veteran educators, and often with additional resources for your own independent study. The lectures are available to anybody, completely free of charge. Lecture courses are a valid and vital learning tool, and may be one of the best methods of learning available.

Note to Managers: Positivity Matters International Socialist Review -- Noam Chomsky: Human intelligence and the environment I’LL BEGIN with an interesting debate that took place some years ago between Carl Sagan, the well-known astrophysicist, and Ernst Mayr, the grand old man of American biology. They were debating the possibility of finding intelligent life elsewhere in the universe. And Sagan, speaking from the point of view of an astrophysicist, pointed out that there are innumerable planets just like ours. There is no reason they shouldn’t have developed intelligent life. Mayr, from the point of view of a biologist, argued that it’s very unlikely that we’ll find any. And his reason was, he said, we have exactly one example: Earth. And what he basically argued is that intelligence is a kind of lethal mutation. With the environmental crisis, we’re now in a situation where we can decide whether Mayr was right or not. So is anything going to be done about it? Public attitudes are a little hard to judge. We’ve just been through a major illustration of this. It’s not because they’re bad people or anything.

tutorials We get a lot of emails asking how to use brushes correctly so I hope this helps you out a little! A brow brush is designed to be stiff and angled for a reason. And we use the slanted edge to shade and the tip of the edge to outline. Put those components together and a brow brush is quite frankly a thing of perfection! Here’s how to use it properly: READ MORE… Last week we explored four different ways to wear Spring’s biggest Cobalt blue trend. This method has been around for centuries! A nod to the Uptown Girl, this look is very put together and polished. Highlighting Pencil — Try Too Faced Instant Attitude Highlighting Pencil.Taupe Pencil — I used Le Metier de Beaute Pencil in Champagne. Note: This is a really light nude lip so to keep it as chic as possible, add a hint of blush to the cheek so you don’t get washed out.

The New Leadership is Horizontal, Not Vertical Several decades ago, when “leadership” became a Big Thing, it was heavily personality-based. It posited Leadership as something done by Leaders, who had learned the art of how to Lead. As a consultant friend of mine, Renee Wingo, put it, “It’s a subject whose proponents can’t figure out whether it’s a noun, a verb, or a gerund.” Leaders were thought of as those who were followed by others. This dichotomy fed the idea that there are two kinds of people in this world – those who lead, and those who follow. Besides reinforcing the personality-based view of leadership, it raises the classic make or buy question – are Leaders just born, or can their secrets be unlocked and learned by others? Finally, this distinction between leaders and followers fed a natural assumption that those roles were vertically related within an organization. Warren Bennis was (and still is) the [leading] guru of leadership. Away from Personality-based Leadership That was then; this is now. Enter Horizontal Leadership

30 Books I’m Glad I Read Before 30 In various ways, these 30 books convey some of the philosophy of how Angel and I live our lives. I honestly credit a fraction of who I am today to each title. Thus, they have indirectly influenced much of what I write about on this site. A medley of both fiction and nonfiction, these great reads challenged my internal status quo, opening my mind to new ideas and opportunities, and together they gave me a basic framework for living, loving, learning and working successfully. If you haven’t read these books yet, I highly recommend doing so. They will enrich your library and your life. Stumbling on Happiness by Daniel Gilbert – Gilbert, a Harvard professor of psychology has studied happiness for decades, and he shares scientific findings that just might change the way you look at the world. What are your favorite books? Photo by: Katie Harris

Hair and Make-up by Steph 21 Rules That Men Have. Number 7 Is So True. 10) You can either ask us to do something or tell us how you want it done. Not both. If you already know best how to do it, just do it yourself. 11) Whenever possible, please say whatever you have to during commercials. 12) Christopher Columbus did not need directions and neither do we… 13) All men see in only 16 colours. 14) If ask what is wrong and you say ‘Nothing’, we act like nothing’s wrong. 15) If you ask a question you don’t want an answer to, expect an answer you don’t want to hear... 16) When we have to go somewhere, absolutely anything you wear is fine... really. 17) Don’t ask us what we’re thinking about unless you are prepared to discuss such topics as football or motor sports. 18) You have enough clothes. 19) You have too many shoes. 20) I am in shape, round is a shape! 21) Thank you for reading this, yes I know, I’m sleeping on the couch tonight… but did you know men don’t really mind that? Enjoyed this list?