WRC 73 Rally Poland 2016 - 30 min Service of Stephane Lefebvre damaged Citroen WRC. The Insane Logistics of Transporting the Biggest Object in History. "Cold Tube" cooling system uses half the energy of an air conditioner. Air conditioners are a convenient way to cool down offices and homes, but they use huge amounts of energy in the process. 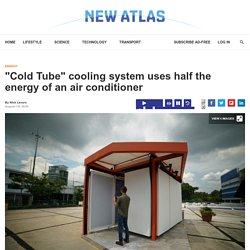 A team of scientists has been developing an alternative solution for those warm summer months called the Cold Tube, which works by absorbing body heat emitted from a person and can use around half the energy of traditional systems as a result. The notoriously bad energy efficiency of air conditioners has motivated the development a range of environmentally friendly solutions, from attachments that use water mist to pre-cool the units to solar-powered systems that produce hot water at the same time. In 2018, Richard Branson even launched a US$3 million competition aimed at developing more energy efficient air conditioners. Similarly, the research team behind the Cold Tube has been investigating next-generation systems that keep people cool in more efficient ways.

How a Tower Crane Can Make Itself Taller and Taller. Lock Picker Shows Off 'One Of The Greatest Lock Design Blunders Of All Time' This 18th Century Machine Changed Everything. The Invis Mx2 Lets You Make Furniture with Invisible and Strong Joints. Here's How Much Those Penetrating Lubricants Work. Gecko-inspired robot grippers to grab up space debris. Photos: Ancient Greek Shipwreck Yields Antikythera Mechanism. Prototype system replaces stairs and elevators with human power. Humans are said to have evolved from an ancestor that once swung through the trees to get about, free to move through the environment in almost any direction. 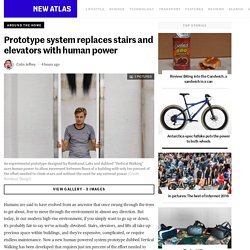 But today, in our modern high-rise environment, if you simply want to go up or down, it's probably fair to say we've actually devolved. Stairs, elevators, and lifts all take up precious space within buildings, and they're expensive, complicated, or require endless maintenance. Now a new human-powered system prototype dubbed Vertical Walking has been developed that requires just ten percent of the effort needed to climb stairs, but can easily move a person up a vast number of floors. According to the designers of the Vertical Walking system, the future will see billions more people moving into urban areas where skyrocketing land prices will force apartment buildings to grow even taller.

Wazer Desktop Waterjet Cutter. Oil spill clean-up material functions like a fern. When an oil spill occurs on a body of water, one way of cleaning up that spill involves the use of floating materials which soak up the oil. 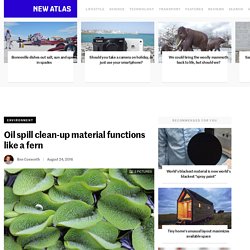 Making Soyuz Microphones. "Hydro Demolition" Is What Happens When Water Does a Jackhammer's Job. Utah Department of Transportation. 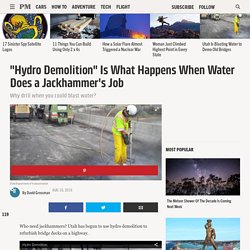 Watch This Bricklaying Robot Build a House in Two Days. This Massive Robot Lays Down Railroad Track Faster Than Any Human. Coolmaterial. Many of you reading this grew up with records because it was the cool way to listen to music back in the day. 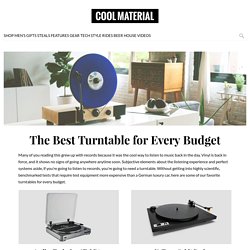 Vinyl is back in force, and it shows no signs of going anywhere anytime soon. Subjective elements about the listening experience and perfect systems aside, if you’re going to listen to records, you’re going to need a turntable. Without getting into highly scientific, benchmarked tests that require test equipment more expensive than a German luxury car, here are some of our favorite turntables for every budget. If you’re looking to spend the absolute least amount of money possible, the Audio-Technica AT-LP60 turntable is the only option you should even consider.

Silk LED bulb emulates natural sunlight. Our well-being and mood throughout the day is largely influenced by the light we are exposed to. 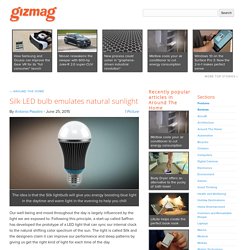 Following this principle, a start-up called Saffron has developed the prototype of a LED light that can sync our internal clock to the natural shifting color spectrum of the sun. The light is called Silk and the designers claim it can improve our performance and sleep patterns by giving us get the right kind of light for each time of the day. The programmable LED bulb emits light that is tailored to the user’s internal circadian rhythm, that is, our physical, mental and behavioral changes over the course of a 24-hour cycle in response to light and darkness. How To Make a Knife From an Old Saw Blade. How to Carve an Axe Handle from a Log. 11 Weird Vintage Appliances (appliances, household, vintage, retro) The stereo that fits in a briefcase For music on the go, check out this "Stereo Sound System" by Bohsei. 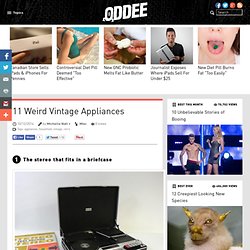 Circa 1970-1980, the full stereo system is included in a nondescript briefcase. The piece is outfitted with a 3-speed turntable (with a 45 record adapter), removable speakers, AM/FM stereo with a rod antenna, and cassette tape player/recorder. It also comes with two microphones, AC connector, and a "Beat Cut" switch, Main switch knob, Speed knob, Program knob, Band knob, Tuning knob, and Tone, Volume Left and Volume Right knobs. Genius Pizza Box Transforms Into Plates, And Then Storage For Leftovers. The only flawed thing about pizza is the pizza box. 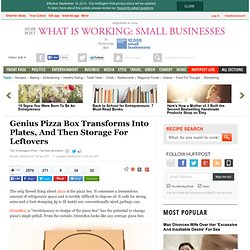 It consumes a tremendous amount of refrigerator space and is terribly difficult to dispose of: It calls for strong arms and a foot-stomping jig to fit inside any conventionally-sized garbage can. GreenBox, a "revolutionary re-design of the pizza box" has the potential to change pizza's single pitfall. From the outside, GreenBox looks like any average pizza box.

Duke Engines' incredibly compact, lightweight valveless axial engine. New Zealand's Duke Engines has been busy developing and demonstrating excellent results with a bizarre axial engine prototype that completely does away with valves, while delivering excellent power and torque from an engine much smaller, lighter and simpler than the existing technology. 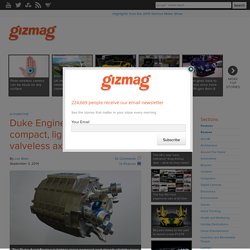 We spoke with Duke co-founder John Garvey to find out how the Duke Axial Engine project is going. View all Duke Engines' 3-liter, five cylinder test mule is already making a healthy 215 horsepower and 250 lb-ft of torque at 4,500rpm – slightly outperforming two conventional 3 liter reference engines that weigh nearly 20 percent more and are nearly three times as big for shipping purposes. With an innovative valveless ported design, the Duke engine appears to be on track to deliver superior performance, higher compression and increased efficiency in an extremely compact and lightweight package with far fewer moving parts than conventional engines.

Source: Duke Engines Share. VSSL Supplies Is Your Survival Kit In a Tube. Viora Lid stealthily improves the takeaway coffee experience. Viora Lid is a new type of takeaway coffee lid designed to mimic the experience of drinking from a ceramic cup Image Gallery (7 images) A company called Vaporpath, which is unsurprisingly based in Seattle, thinks it has the solution for all of our coffee-drinking woes. 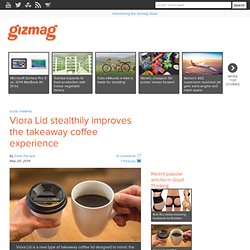 It has developed the Viora Lid, a new kind of plastic lid designed to fit on the top of traditional takeaway coffee cups. View all One of the most disappointing parts of buying any takeaway coffee is the cheap lid on the cup. 22 Mesmerising GIFs That Show How Things Are Made. LG Newsroom. Combines Gentle Soft Airflow with Subtle LED Lighting for a Comfortable and Stylish Home Environment SEOUL, Mar. 10, 2014 — LG Electronics (LG) today unveiled its latest flagship Residential Air Conditioning (RAC) solution, ARTCOOL Stylist Inverter V, a winner of a 2014 iF Design Award. The successor to the original ARTCOOL Gallery launched in 2001, the ARTCOOL Stylist is a unique square wall unit featuring subtle LED lighting and a new 3-way Soft Airflow feature which distributes air evenly to ensure greater comfort.

And thanks to the LG’s advanced inverter technology, this premium model provides efficient, near-silent operation as well as greater energy savings. “LG ARTCOOL Stylist takes air conditioner design to a whole new dimension,” said Hwan-yong Nho, president of the LG Electronics Air Conditioning and Energy Solution Company. The premium ARTCOOL Stylist sets a high mark for residential air conditioners with its timeless design. Photo Essay: Inside the Hamilton Watch Factory, 1936. Salvaging the Costa Concordia: why an engineer's dream is a daunting task (+video) It was one of the biggest passenger ships to capsize, and it could require a vessel of equally epic proportions to remove the Costa Concordia from the rocky shores off the coast of Tuscany. Skip to next paragraph Nick Squires Italy Correspondent Nick Squires has been based in Rome since 2008, from which he covers Italy, the Vatican, and surrounding countries, from Greece to the Balkans.

Educated at Oxford University, he spent two years working at a newspaper in Hong Kong before joining the BBC World Service in London. Recent posts. Historic Bridge Disasters Caught On Film. SExpand When I was a few months shy of being 6 years old, I remember hearing about the Silver Bridge disaster. This happened on Dec. 15, 1967 when the bridge, over the Ohio River and tying Point Pleasant WVA and Kanauga OH. It happened during rush hour and killed 46 people. Scientists Unravel Mystery of Ancient Greek Machine. Scientists have finally demystified the incredible workings of a 2,000-year-old astronomical calculator built by ancient Greeks. A new analysis of the Antikythera Mechanism, a clock-like machine consisting of more than 30 precise, hand-cut bronze gears, show it to be more advanced than previously thought—so much so that nothing comparable was built for another thousand years.

"This device is just extraordinary, the only thing of its kind," said study leader Mike Edmunds of Cardiff University in the UK. Faraday cage. Entrance to a Faraday room Faraday shield at Art Nouveau power plant in Heimbach, Germany. Windmills at sea can break like matches. When waves above 13 metres hit wind turbines, an unfortunate force arises at the rear of the turbine. Underground detectives map secrets in stone. Hamburger-making machine churns out custom burgers at industrial speeds. Cloaking technology could protect offshore rigs from destructive waves. European Space Agency working on using rocket fuel in cars. At first glance, hydrogen seems like a brilliant alternative fuel for motor cars.