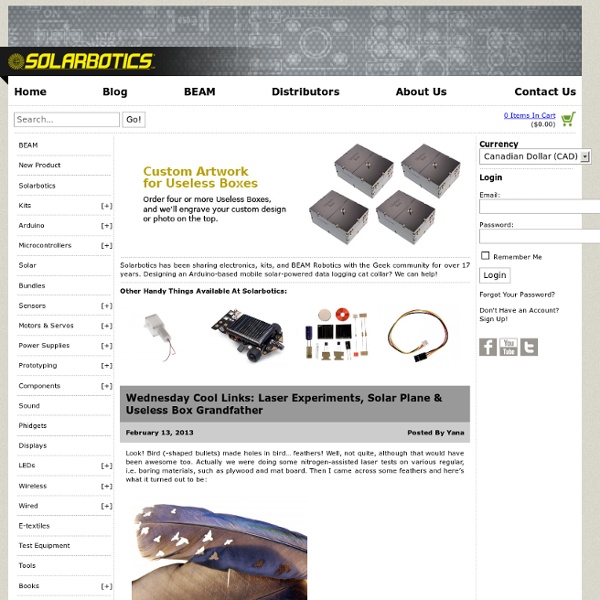 Robot Store (HK) -- Robot parts, MIT Handyboard system, LEGO, OOPIC, Dr Robot kits, robot parts, robot kits, sensors, DC motors, gearbox, gear box, solar battery, stepper motor, wheel, tire, robot parts, RF module, digital compass, sonar, Tamiya models, O Solar Light How a Solar Garden Light works Two different circuits and how they work Both circuits can be converted to 5v regulated output. See: Power Supply 5v SolarNo kits are available for this discussion. The complete Garden Light can be bought for less than $5.00!! Both Solar Garden Light circuits in this article perform 2 functions: 1. They charge a battery and 2. Turn on a high-bright white (or yellow) LED at dusk and off during daylight hours. The two circuits are completely different in design and we will see how different designers tackle the same problem. Here's the clever part: The circuit doesn't deliver a DC voltage to the LED but a high-frequency pulse. CURRENT LIMIT RESISTOR Although a current-limiting resistor between a solar panel and a battery is technically needed, it is not necessary if the battery will not be overcharged. THE SOLAR CELL The SOLAR CELL actually consists of a number of cells as each cell only generates about 0.5v to 0.6v. The function of each component

Simple Solar Circuits Simple Solar Circuits: How to get started adding solar power to your small electronics projects. Use the sun to power small solar and battery powered night lights, garden lights, and decorations for halloween. The first part of a solar circuit is… a device for collecting sunlight. [Before we move onto our first examples, a word of caution: These are small simple circuits. Direct Drive: The most obvious way to use power from a solar panel is to connect your load directly to the output leads of the solar panel. Here are a couple of examples of this in practice: On the left, we’ve hooked up one of our little solar panels directly to a small motor taken from an old CD player. Interruption-resistant direct drive: The “direct drive” circuits work well for their design function, but are rather basic. Instead of adding a single supercapacitor, you might notice that we’ve actually added two. Adding a battery In this circuit the solar panel charges up a 3-cell NiMH battery (3.6 V). Detecting Darkness