9 Overlooked Technologies That Could Transform The World 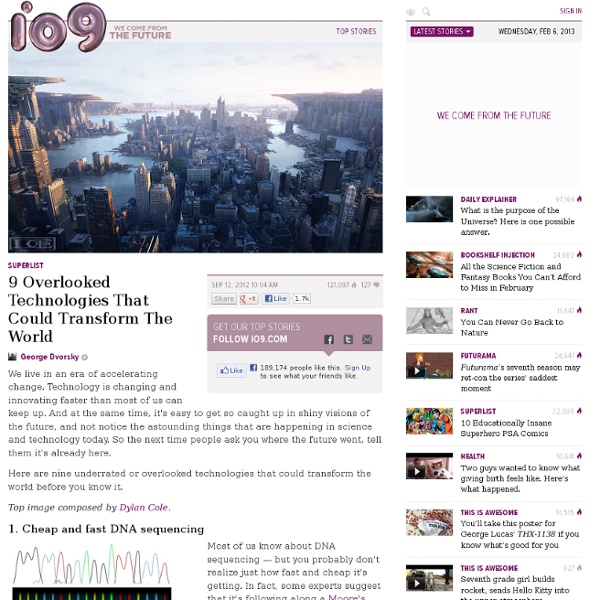 What I've noticed is that most people don't really pay attention to "science" news, unless it's something that they can see immediately. I think this is at least partially because of the amount of news that comes out daily - whatever we may think about the quality of news, there is just a flood of it, which makes picking out "interesting" items difficult. When I talk about (just for example) the idea of gene therapy, most people think that it is still complete science fiction, as opposed to a very near-term product that will be available. Of course, CSP has been around for years, so it isn't really "new" to the average person. Finally, of course, for a majority of people, the only science fiction they think of it Star Wars/Trek, or (advanced!) If you are on friendly terms with a non-technical coworker, ask them about any of the subjects mentioned here, you will be surprised at their response. I get that, which is why I specifically mentioned "popular sci-fi." Related:  Transhumanism

Transhumanism: The Most Dangerous Idea? "What ideas, if embraced, would pose the greatest threat to the welfare of humanity?" That question was posed to eight prominent policy intellectuals by the editors of Foreign Policy in its September/October issue (not yet available online). One of the eight savants consulted was Francis Fukuyama, professor of international political economy at Johns Hopkins School of Advanced International Studies, author of Our Posthuman Future: Consequences of the Biotechnology Revolution, and a member of the President's Council on Bioethics. In his Foreign Policy article, Fukuyama identifies transhumanism as "a strange liberation movement" that wants "nothing less than to liberate the human race from its biological constraints." Human liberation from our biological constraints began when an ancestor first sharpened a stick and used it to kill an animal for food. What is a human capacity anyway? Our ancestors had no wings; now we fly. Let's take their over-the-top scenario down a notch or two.

Microsoft Research uses Kinect to translate between spoken and sign languages in real time - StumbleUpon 30 October '13, 08:31pm Follow Microsoft’s Kinect is a wonderful piece of technology that seems to know no bounds. Microsoft Research is now using it to bridge the gap between folks who don’t speak the same language, whether they can hear or not. As you can see in the video below, the Kinect Sign Language Translator is a research prototype that can translate sign language into spoken language and vice versa. In short, Kinect captures the gestures, while machine learning and pattern recognition programming help interpret the meaning. While this is clearly a massive achievement, there is still a huge amount of work ahead. Guobin Wu, the program manager of the Kinect Sign Language Translator project, explains that recognition is by far the most challenging part of the project. Wu says there are more than 20 million people in China who are hard of hearing, and an estimated 360 million such people around the world. ➤ Kinect Sign Language Translator part 1 and part 2 Top Image Credit: Microsoft

O melhor de dois mundos: Solar avanço produção de hidrogênio Using a simple solar cell and a photo anode made of a metal oxide, HZB and TU Delft scientists have successfully stored nearly five percent of solar energy chemically in the form of hydrogen. This is a major feat as the design of the solar cell is much simpler than that of the high-efficiency triple-junction cells based on amorphous silicon or expensive III-V semiconductors that are traditionally used for this purpose. The photo anode, which is made from the metal oxide bismuth vanadate (BiVO4) to which a small amount of tungsten atoms was added, was sprayed onto a piece of conducting glass and coated with an inexpensive cobalt phosphate catalyst. "Basically, we combined the best of both worlds," explains Prof. Dr. Thus the experts were able to develop a rather elegant and simple system for using sunlight to split water into hydrogen and oxygen. Metal oxide as photo anode prevents corrosion of the solar cell Explore further: Polymer-coated catalyst protects 'artificial leaf'

The Power of Technology Visit page > Big Think is a global forum connecting people and ideas. It may be a cliché to say that knowledge is power, but that doesn’t make the statement any less true. We know that there are just 24 hours in a day, that you are bombarded with information, and that the bombardment will only escalate. We believe that not all information is equal. We believe that expertise is invaluable and should be shared. Bostrom Responds to Fukuyama’s Assertion that Transhumanism is World’s Most Dangerous Idea Nick Bostrom (Sept 10, 2004) “What idea, if embraced, would pose the greatest threat to the welfare of humanity?” This was the question posed by the editors of Foreign Policy in the September/October issue to eight prominent policy intellectuals, among them Francis Fukuyama, professor of international political economy at Johns Hopkins School of Advanced International Studies, and member of the President’s Council on Bioethics. And Fukuyama’s answer? Transhumanism, “a strange liberation movement” whose “crusaders aim much higher than civil rights campaigners, feminists, or gay-rights advocates.” More accurately, transhumanists advocate increased funding for research to radically extend healthy lifespan and favor the development of medical and technological means to improve memory, concentration, and other human capacities. According to transhumanists, however, the choice whether to avail oneself of such enhancement options should generally reside with the individual.

The World's Top 10 Most Innovative Companies In The Internet Of Things - StumbleUpon 1. Nest (Google) For solving yet another pain point in building the smart home. Following its game-changing "learning thermostat," Nest released the Protect smoke detector, again infusing a previously design-neglected home appliance with modern detail and functionality. From the Protect’s hands-free silencer and voice controls to its smartphone notifications and battery monitor, Nest has produced the first nonannoying smoke detector—and picked up $3.2 billion in cash from Google along the way. 2. For having the bright idea to make smartphone-tethered bulbs. 3. For unleashing simple connected products for the cautious consumer. Monitor your home. 4. For upping the activity-tracking game with a next-gen, supercharged wristband. 5. For opening a platform of Internet-wise devices to let users customize their connected homes. 6. For strengthening its products to stand out among the quantified-self crowd. 7. For giving users control of whatever’s plugged in. 8. 9.

Learn About Bitcasa and Infinite Drive Bitcasa allows you to securely store, access, and share all your digital possessions – every picture, every movie, every document, every song – without limits. The Bitcasa Platform provides completely private and secure cloud storage, accessible on any computer or mobile device. In September 2011, Bitcasa was launched at TechCrunch Disrupt, and took runner up in the Startup Battlefield competition. By the next day, the Beta invite list had grown to over a hundred thousand people. And Bitcasa was born. Bitcasa has raised $20M in venture financing to date from Horizon Ventures, Pelion Venture Partners, Samsung Ventures, Andreessen Horowitz, First Round Capital, and others. Bitcasa is growing rapidly, and always hiring great developers. Allen JoeTechnical Support LeadConceived by robots, AJ is a time traveling wizard from the future. Based in Hong Kong, Horizons Ventures manages the Internet and technology investments of Mr.

A Stick Figure Guide to the Advanced Encryption Standard (AES) (A play in 4 acts. Please feel free to exit along with the stage character that best represents you. Take intermissions as you see fit. Act 1: Once Upon a Time... Act 2: Crypto Basics Act 3: Details Act 4: Math! Epilogue I created a heavily-commented AES/Rijndael implementation to go along with this post and put it on GitHub. The Design of Rijndael is the book on the subject, written by the Rijndael creators. Please leave a comment if you notice something that can be better explained. Update #1: Several scenes were updated to fix some errors mentioned in the comments.Update #2: By request, I've created a slide show presentation of this play in both PowerPoint and PDF formats.

Institute - Bioethics - Articles/News - The Transhumanists: By: Wesley J. SmithNational Review OnlineSeptember 20, 2002 Original article In recent years, scientists have mixed the DNA of a jellyfish with that of a monkey, creating a "transgenic" animal that glows in the dark. ("Transgenic" means possessing the genes of more than one type of organism.) Other researchers are creating transgenic animals that contain minute quantities of human DNA. But what about human transgenic research? Welcome to the surreal world of "transhumanism," a nascent and explicitly eugenic philosophy that advocates taking control of human evolution through gene modification. Transhumanists are breaking the intellectual ground they hope will eventually lead to public acceptance of genetic manipulation — not just to improve health, but to change our very natures. Transhumanists are biotech absolutists. Transhumanist theory has arisen in the context of a strengthening nexus between the views already popular in bioethics and animal-rights advocacy. — Wesley J.

Forget WiFi, It's LiFi: Internet Through Lightbulbs - StumbleUpon Whether you’re using wireless internet in a coffee shop, stealing it from the guy next door, or competing for bandwidth at a conference, you’ve probably gotten frustrated at the slow speeds you face when more than one device is tapped into the network. As more and more people—and their many devices—access wireless internet, clogged airwaves are going to make it increasingly difficult to latch onto a reliable signal. But radio waves are just one part of the spectrum that can carry our data. What if we could use other waves to surf the internet? One German physicist, Harald Haas, has come up with a solution he calls “data through illumination”—taking the fiber out of fiber optics by sending data through an LED lightbulb that varies in intensity faster than the human eye can follow. Haas says his invention, which he calls D-Light, can produce data rates faster than 10 megabits per second, which is speedier than your average broadband connection. Photo (cc) via otto-otto.com

NATURAL BORN CYBORGS? NATURAL BORN CYBORGS? By Andy Clark We cannot see ourselves aright until we see ourselves as nature's very own cyborgs: cognitive hybrids who repeatedly occupy regions of design space radically different from those of our biological forbears. The hard task, of course, is now to transform all this from (mere) impressionistic sketch into a balanced scientific account of the extended mind. Introduction "As our worlds become smarter, and get to know us better and better," writes cognitive scientist Andy Clark, "it becomes harder and harder to say where the world stops and the person begins." Clark's examines the"potent, portable machinery linking the user to an increasingly responsive World Wide Web," as well as "the gradual smartening-up and interconnection of the many everyday objects which populate our homes and offices." ANDY CLARK is Professor of Philosophy and Cognitive Science at the University of Sussex, UK. See Andy Clark's Edge Bio Page NATURAL BORN CYBORGS?